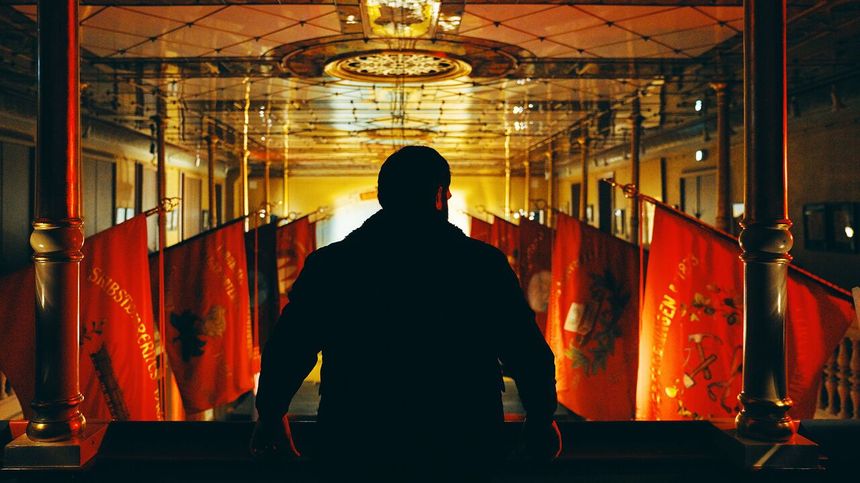 By design, Rotterdam's Tiger Competition puts the spotlight on new talents, giving them a coveted push into the future of world cinema.

Among the chosen class of 2019 appears a newcomer from Denmark, Ulaa Salim. After graduating at National Film School of Denmark, writer-director-producer Salim clutched the first draft of what would become his feature debut, Sons of Denmark, starting the rounds for financing. Hailed as a promising talent on home turf, the domestic scheme New Danish Screen, a support programme of Danish Film Institute, funded Salim's first feature-length foray onto the big screen.

In a short but explosive prologue, another bright star from the happiest country in the world, the Danish actor Elliot Crosset Hove of Winter Brothers (read my review) introduces the audience to a displeasingly familiar world. The topic of Sons of Denmark is set right from the opening scene and permeates the story and plot through and through to the final showdown. After the prologue, a group of young and law-abiding boys, albeit considered an ethnic minority, endures harassment and taunting to leave the country from apparent right-wing-leaning conservatives.

Setting the story into near future of 2025, Salim personifies the anti-immigrant sentiment into an ultra-nationalist figure of politician Martin Nordahl, whose National Movement promises to set the record straight. With no shortage of real-life inspirations, the negative tide against people of Arabic background fuels the political climate in Salim's version of Denmark. The menace and fear for his family's safety drives Zakaria, a 19-year old from the group of law-abiding boys, to join forces with Ali, sharing the same opinion and will to act.

Ali introduces Zakaria to Hassan, an experienced instigator of the "right kind of hate" against the bad kind of hate. A worm-tongued, false messiah of ethnic minorities poses as an obvious pendant to ultra-conservative white agitator Nordahl. Both of them are the prototypes of a false prophet, although on different sides of the fence, yet sharing the very same denominators, namely, radicalization and extremism.

Salim makes the issue that has been rattling Europe the subject of his story, though he avoids any genesis focusing solely on the unfolding of racially-motivated hatred. Stripped of fundamentalist religion on one side and so-called anger of white working-class, frustrated men on the other, the emerging writer-director-producer in his words wants to open a discussion on what kind of world people want to live in, while avoiding open moralizing or sending warning messages.

Sons of Denmark thus opted for genre-leaning arthouse fare. Salim embeds the story in a dualistic composition where one aspect mirrors the other. Hassan and Nordhal as two opposites act as secondary characters emblematizing the larger socio-political context, the big picture. Zakaria and Ali lead as primary characters following the same configuration, albeit in a small scale representing a personal story of an individual.

By suppressing the larger picture, Sons of Denmark is less of a political thriller concentrated on "the field", with ordinary people rather than an office and its white collars, while instilling thriller tropes onto social drama. Firstly, in terms of survival as a preservation of status in the Danish society without being harassed, secondly in the literal sense when nationalism starts to incite the dark side of a blinded passion of the extreme right-wing. Worlds, opinions, and ideologies collide in Salim's thriller that appropriates police procedural elements for higher audience engagement, packaged in Scandi neo-noir aesthetics.

The confluence of genre filmmaking and arthouse drama proved to be a beneficial marriage of a film's bigger marketability and ambitions reaching beyond the box-office bearing a social message. Sons of Denmark filled the slot vacated by last year's IFFR Tiger competition title, The Reports on Sarah and Saleem (read the review), directed and produced by Muayad Alayan.

Following the similar formula of the thriller-drama set in-between the Palestine-Israel tension in a modern-day political update of "Romeo and Juliet," The Reports on Sarah and Saleem, Salim restricts his viewfinder on the two leading characters of Ali and Zakaria, leaving the bigger perspective of the big politics or turbulent social implications mostly outside the frame. Compared to The Reports on Sarah and Saleem, Sons of Denmark feels more concentrated and action-filled, neglecting the sprawling network of cause and effect that migrated from fringes to mainstream and made extremism talk of the (every) day.

The Danish writer-director revealed he did not want to analyze the situation or the context, rather focusing on the process and the fruit of wrath it bears. However, Alayan manages to intertwine the arch of Palestinian-Israel conflict and the intimate story of the two protagonists and their families without losing audience engagement. Despite having almost the same running time, The Reports on Sarah and Saleem offers a denser narrative in both parallel plotlines, thus creating more complex storytelling.

Ulaa Salim addresses a topical issue which more filmmakers will follow suit in both iterations, as a genre (an irreverent comedy) and bleak drama, approaching more explicitly the "angry white men" social phenomenon, as well as rampaging xenophobia. In his first feature offering, Salim leans more towards the genre territory to demonstrate the fallout of both sides of radicalization and the impact it bears on ordinary folk. The severity of the theme and acts carried out in the film are emphasized by "Lacrimosa" from W.A. Mozart´s masterpiece, "Requiem," on three different occasions.

Nevertheless, Sons of Denmark introduces new talent to watch out for, along with the cinematographer Eddie Klint, who provides stylish and moody lensing.

More about Sons of Denmark