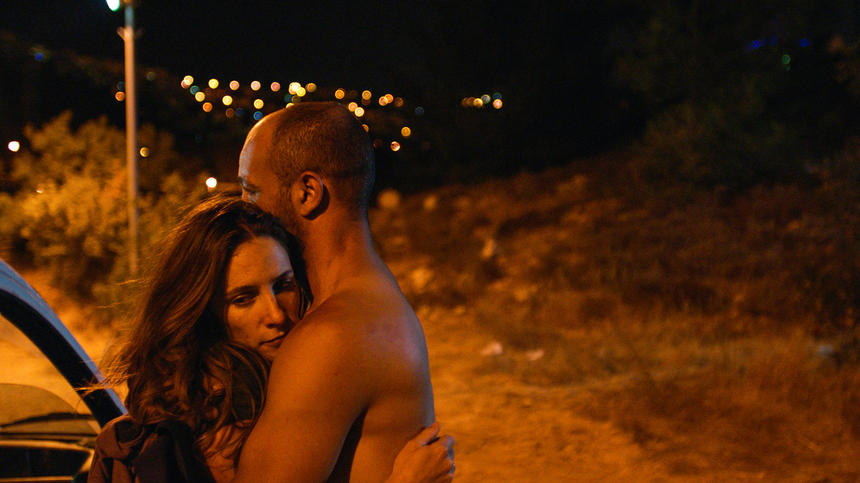 The Palestinian drama The Reports on Sarah and Saleem, a sophomore feature directed by Muayad Alayan and written by his brother Rami Alayan, turns out to be a surprise discovery in this year´s Rotterdam´s main competition. The vague title and anemic synopsis ("An extramarital affair in Jerusalem ignites a dangerous game of deceit between those who hold power and those who don´t") do not fully convey what the film incorporates.

Sarah is a Jewish café owner in West Jerusalem with a small daughter, and an Army colonel, David, for husband. Sarah has a history of closing up her shop because of her husband´s relocations. The scenario is about to be repeated since David, awaiting a promotion, will have to move again.

Arab Saleem lives in East Jerusalem and works in West Jerusalem delivering bakeries, a low-paying job that causes him a minor headache since his wife Bisan will soon give birth to their first child. Bisan´s brother is helping them make ends meet while Bisan hints she is studying. Saleem´s emasculation in conservatively-gender-stereotypical environment, and Sarah's frustration with her distance husband and too much work on her hands, lead them into the back of Saleem´s van for sessions of steamy sex after the dusk. No deeper emotions attached, just purely therapeutic reasons.

The hook-up is supposed to be temporary and insignificant, and they develop a secure routine. In the meantime, Saleem's stalwart efforts to raise more money leads him to accept Bisan´s brother´s offer to smuggle items to Bethlehem under the veil of darkness.

On one fateful night, Saleem cuts short the session with Sarah because of a delivery. Sarah decides to accompany him, and while being aware of the bad combination of Arab and Jew and Betlehem, she tries to pose as a European tourist. A conflict with a local emerges after he adamantly hits on Sarah and Saleem loses temper. The first brick of the fragile domino of their relationship, transgressing social and political in a space governed by orthodox rules, falls, triggering an unforgiving chain reaction, grinding the lives of the central fourleaf, and the plot and fates entangle beyond expectations.

Despite the set-up and the saucy extramarital affair, The Reports on Sarah and Saleem is definitely not a modern resurrection of the tragic love of Romeo and Juliet in the torn heart of Jerusalem. The Alayan brothers might have used the general cultural knowledge ingrained in the western collective subconscious to hint at the Bard´s tragic lovestory as an effective dramatrugic tool.

As soon as the secret affair crashes with the politics of the territory, the Alayan brothers smoothly turn the tables of a love story into a full-blown political thriller and social drama pondering on the history of the region and the current stereotypes controling it, such as racism. Sarah´s friend does not care she is cheating on her husband, but on the fact she is cheating with an Arab.

The Reports on Sarah and Saleem emerges as a film the most suitable for a wide audience outside the circles of devoted cineastes, as Muayad and Rami Alayan combine the best of both worlds, arthouse drama and a political thriller shrouded as an illicit affair. The dramatic plot, street action and a suspicion of treason included, builds up suspense and pulse-racing rhythm while the plot twist the Alayan brothers are dropping could be easily mishandled in the script and direction and wrecked the whole film into a laughing stock. In the current development of plot, the events conspiring against ethnically-diverse lovers and their innocent families, did not wind up as absurd as the potential they harness for such effect.

Furthermore, Rami Alayan succeeds in weaving all the local particularities into the script without burdensome didacticism nor over-the-top exoticization, not trying to school the audience neither fool making the viewing all the more interesting experience. Alayan practicizing the pick-n-mix method in selection and assimilation of known genre codes succeed in matching family(ies) melo(drama) and spy thriller to the consistency of story they aspired to tell while the substance and the form do not compromise each other.

The Reports on Sarah and Saleem got to be the first Palestinian feature film in the Rotterdam´s main competition whose production was supported by the Rotterdam´s very own Hubert Bals Fund, the Netherlands Film Fund, World Cinema Fund (Berlinale), Film Lab Palestine and Arab Funds for the Arts and Culture among others. Not as cutting-edge cinema on the first glance the Rotterdam´s breed is notorious to be, Muayad Alayan sophomore feature happens to be more convoluted event bearing historical, social and local complexities within the framework of an universal story whilst preserving audience attractivity in spite of 127-minute running time.