Sundance 2019 Review: WE ARE LITTLE ZOMBIES, A Stylized 8-bit Ode To Isolation 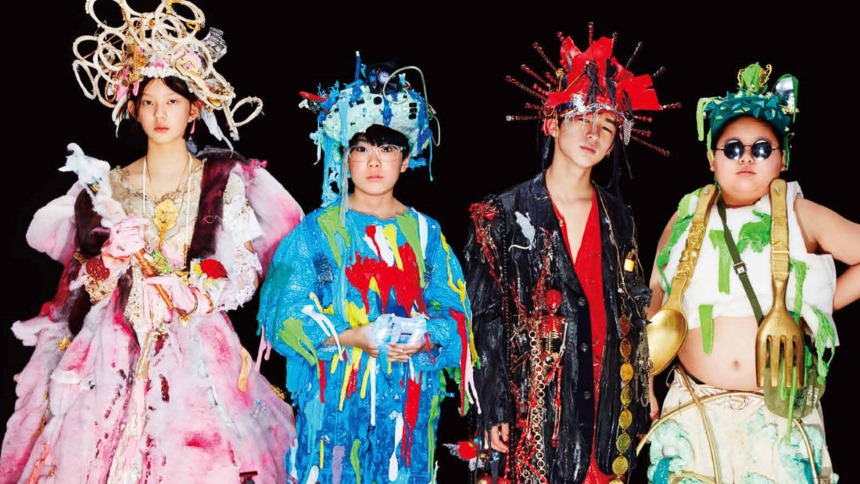 When four adolescent strangers meet at the crematorium on the day their parents are being laid to rest, they find they have more in common than the fact that they are all newly orphaned. Strangely, none of them appears to have any emotional reaction to their loss, they react to the world around them with a shrug, and that - along with convenient inspiration from an ancient handheld video game - lends them the nickname Little Zombies. Appropriate enough.

The kids - Hikari, Ikuko, Ishi, and Takemura - bond over their shared disinterest in the world and decide to make their own adventure, traveling through the wreckage of the lives they led before their tragedies in an unconscious attempt to find a reason to go on. When this nostalgia trip leads them to a local dump filled with magical, musical Mad Max-ical transients, they are inspired to turn their antipathy into song, they hit it big and find it hard to disappear into their own worlds the way they once could.

The song, We Are Little Zombies, is a catchy pop number that uses the theme song of Hikari's ever present handheld video game - think Linus' blanket - as a basis for an ode to dissatisfaction that goes viral and lands the group in the limelight, much to their chagrin. However, it's not too late to turn back, and the Little Zombies do their best to find what they need, even if it means finding it alone.

Those familiar with Japanese indie films of the last decade or so will quickly recognize some of the stylish touches and inspirations utilized by Nagahisa for We Are Little Zombies. The most prominent direct comparison is to the early films of Nakashima Tetsuya, director of Kamikaze Girls and Memories of Matsuko. While Nakashima later turned to more grim subject matter in Confessions and World of Kanako, it was those early works, full of magical realism and whimsy even when exploring dark subject matter, that seem to have made the most impact on We Are Little Zombies.

Rather than taking the kawaii (cute) culture as a starting point like Nakashima, Nagahisa leans more toward the otaku (geek) culture by structuring We Are Little Zombies like an 8-bit video game, even going so far as to include mini-missions and frequent lo-fi animations along with the bubbly music cues that punctuate the action. It's certainly a bit on the nose at times, but this paradigm shift from reality does help to put the audience at as much of a distance from the real (very sad) world of these characters as they seem to put themselves, so as a stylistic choice, it's actually pretty clever.

By separating characters from their reality using the filter of the video game/pop culture obsession, we are able to more clearly see the reasons they have separated themselves from their feelings. Each of the kids gets their own origin story, though Hikari's is the most fleshed out, that allows us a peek behind their mostly dead eyes and the reasons they do what they do. For a film that is so depressing on paper, We Are Little Zombies manages to keep the action lively through its oddball stylistic choices and the occasional 8-bit interlude.

Perhaps the film's greatest weakness is that at times it feels like it needs to be a little crazier. Unlike the work of Nakashima, and Memories of Matsuko in particular, which is thematically very close to this, We Are Little Zombies uses style as flourish, rather than style as substance. It's a small thing, perhaps not even worth noting, but there it is. As it stands We Are Little Zombies is a charming piece of pop-culture obsessed cinema that is sure to appeal to weirdoes like me who like their films a little left of center.

More about We Are Little Zombies