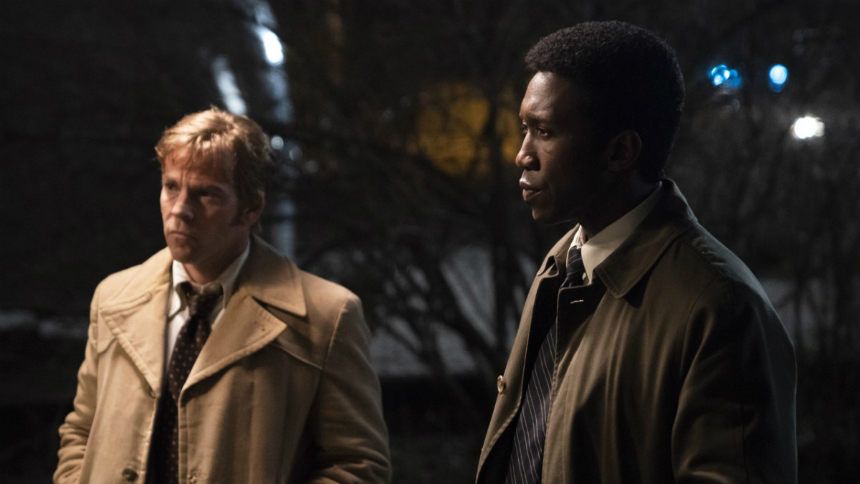 Jeremy Saulnier directed the first two episodes of True Detective, Season 3, which immediately makes the series more interesting for me.

Saulnier, whose three films as a writer/director -- Murder Party, Blue Ruin, Green Room -- are grimy and gritty and, really, quite glorious in their intensity and sureness of purpose, displayed a grander scale of ambition with Hold the Dark, written by Macon Blair and William Giraldi. That film bears a repeat viewing or two; I may not have been fully prepared for it a few months ago when it debuted on Netflix.

Stepping aboard the third season of True Detective as producer and director, alongside creator, writer and producer Nic Pizzolatto, Saulnier puts his stamp on the first two episodes. Even though they easily fall in line with the first season (directed by Cary Joji Fukunaga), as far as tone and pacing are concerned, Saulnier brings a crisp clarity to the oft-confusing narrative setup devised by Pizzolatto.

Wayne Hays is a detective with the Arkansas State Police. As embodied by Mahershala Ali, Hays is a Vietnam War veteran who has learned to control and contain his nightmares. He and his partner, Roland West (Stephen Dorff), also a war veteran, are clearly overqualified for their jobs, as demonstrated by their actions once they are assigned to a case of two missing children.

The offspring of separated parents Tom (Scoot McNairy) and Lucy (Mamie Gummer) have gone missing, somewhere near the small community outside Fayetteville, Arkansas where they live. It's not quite a town where everyone knows everyone else, but it seems like everyone has a nodding acquaintance with what's going on. It's 1980 in the American South, and so most white folks keep their racism to themselves, though it still bubbles and seethes right under the surface.

The story also follows Wayne Hays in 1990, when a significant development in the case occurs, and in 2015, when a television documentary prompts more, often bitter reflections. Mahershala Ali is fully up to the role, capturing Hays at different periods of his life with expert modulation. This extends to his relationship with schoolteacher Amelia Reardon (Carmen Ejogo).

What's wonderful so far is that Ali commands the screen whenever he appears; he exhibits the type of presence that draws attention even when he's not speaking, a brooding, possibly broken man who has put himself back together time and time again. It's clear that season 3 will be compelling to watch, just to see what Ali does next.

McNairy has a far more limited range to play in these first two episodes, yet he is once again a magnetic actor to watch; his ability to manifest pure pain is startling. It's also good to see Dorff ace the part of a clever and experienced officer who doesn't feel the need to trump his partner at every opportunity; they respect each other without overdoing it.

That's a mark of Pizzolatto's good writing. Not every character is so fleshed out so far -- it's tough to get a read on Ejogo's teacher -- but there are six more episodes to come. Saulnier exited the series shortly after these two episodes, so, once again, the bulk of the series will depend on the storyline and characters developed by Pizzolatto.

The first season rang true with great intrigue and a wealth of good characters, while the second season quickly ran into trouble, featuring a collection of corrupt people engaging in various forms of nastiness; my interest dissipated accordingly.

It's far too soon to draw any conclusions, but the first two episodes have established True Detective once again as a series worth watching. So far, the best reason to watch it is to marvel at Mahershala Ali's performance, but that's reason enough. I'm hoping for more, of course.

True Detective is available to stream on the stand-alone app HBO Now; it's also available as a premium channel on many cable services.

Do you feel this content is inappropriate or infringes upon your rights? Click here to report it, or see our DMCA policy.
Carmen EjogoHBOJeremy SaulnierMahershala AliNic PizzolattoStephen DorffTrue Detective