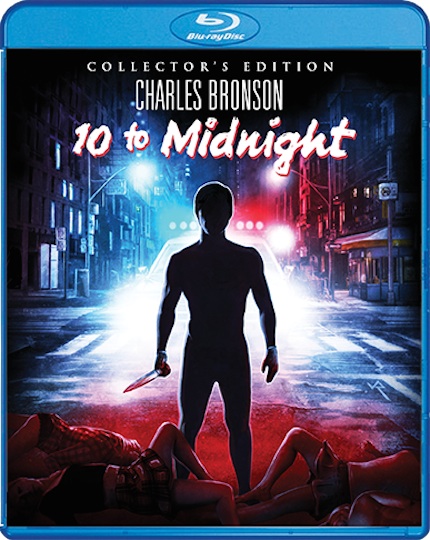 It's a relic of its gloriously insane cinematic times, and stars the inimitable (well, there's that one guy, in face only, not in voice) Charles Bronson as Leo Kessler, a man's man hard cop, who, like Dirty Harry, and lots of his other roles, couldn't care less about the rights of a lunatic killer.

Bronson made a name for himself in his mid-to-late career playing middle-aged men and senior citizens who were just not going to take it anymore, vigilante style. There's a lot of talk about these films being utter right-wing fantasies, and while that may be true, they're just so much fun to watch. Does anyone really not like seeing some well-earned vengeance?

The first time I saw 10 To Midnight, I actually gasped at the ending, which I won't give away. I was amazed that the film "went there" and was pretty thrilled to be seeing an audacious ending, as well as one that made me laugh out loud (after the gasp) due to that same audacity.

Directed by J. Lee Thompson (The Guns of Navarone, Cape Fear), the film follows Kessler as he tries to hunt down a murderer inspired by real-life serial killer Richard Speck.The audience knows exactly who this guy is from the get-go --- Warren Stacy, played by a fantastic Gene Davis (who really should have had a more high-profile career after this role). Kessler's partially estranged nurse daughter Laurie (Lisa Eilbacher) gets within Davis' sights, and it's any guess as to if she or any of her nurse friends will make it out alive.

I haven't had the pleasure of seeing the previous Blu-ray release from Twilight Time, so I can't compare the two, but this collector's edition release from Scream Factory looks excellent and sounds great --- so much better than that first time I saw it on Amazon. 10 To Midnight gets a hearty two thumbs' up from me.

The talking head interviews are interesting, but the two audio commentaries are what you really want to listen to if you're a Bronson, Cannon Films, or weird cinema fan. There are plenty of tidbits about Bronson and his life, as well as on the production of the film itself. There's some interesting talk about how "real men don't eat quiche" --- a scene in the film which referenced a non-fiction book on male gendering that was in pop culture at the time.

If you want to see one of the best and arguably weirdest Charles Bronson films ever made, check out the trailer and go pre-order 10 To Midnight (it's due out on January 22) at Scream Factory's site here.