Writer-director Henry Dunham's thriller The Standoff at Sparrow Creek has met with controversy and criticism well before any footage was actually shown to an audience. Initially titled "Militia" and produced by Cinestate, the project had acquired a reputation for being either too right-wing or too insensitive. Some real-life incidents regarding real militia didn't help. Actors and casting agencies walked away, refusing to cooperate.

Seeing the finished product makes you wonder what all the fuss was about, for The Standoff at Sparrow Creek is an intelligently made chamber-drama (it could easily have been a theater-play), in which several characters clash with each other while cooped-up together in a time of crisis. 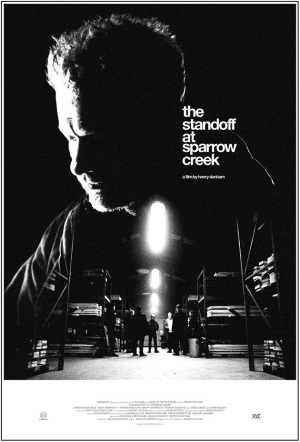 In the film, members of a private militia gather at a lumber mill after a mass shooting. An armored gunman shot up a policeman's funeral, killing several people before escaping into the forest. What's worrying the militia is that the weapon used was of the same type they themselves use. Even more worrying: a quick inventory of the militia's arsenal shows one of their weapons is missing, along with a set of body-armor.

The militia's members now have a difficult choice to make: hide and deny everything, or figure out who the culprit is so they can scape-goat him. Other militias phone in, demanding details, while the police intensifies its search for the killer.
Lucky enough for the militia, one of their members is Gannon (James Badge Dale), an ex-cop with a talent for ferreting out the truth. With a tight deadline and rising tensions, the militia's leader Ford (Chris Mulkey) orders Gannon to start interrogating each member...

Those fearing that the film would glorify being part of a militia need not have worried: when the shit starts hitting the fan, you definitely do not want to be anywhere near this group. Some members are shown to have a pretty good reason for distrusting the government, and some take part out of political ideology, but the batch is pretty diverse - as much as that term applies to a group of gun-toting white males.

The fact that Henry Dunham doesn't write these people off as 'just a bunch of loonies' greatly works in the film's favor. As in Reservoir Dogs, you get to pick favorites in a group of characters you might in principle not agree with. Dunham keeps his script lean, and with the film clocking in at 88 minutes, he doesn't allow for over-elaboration or any padding. A strong cast of known character actors make for a great ensemble, in which nobody really steals the show, but in which nobody drops the ball either.

Feel free to bring any political baggage with you into the cinema. Left-wing or right-wing, I can't imagine people getting too angry over this one. The Standoff at Sparrow Creek is a great little thriller, and I recommend watching it.

The Standoff at Sparrow Creek had its European premiere at the 2018 Shivers Film Festival in Konstanz, Germany. It gets to select theaters in the United States on the 18th of January, along with a VOD release.

Disclosure: The Standoff at Sparrow Creek is co-produced by XYZ and credits Todd Brown as co-Producer. Todd was not involved in the writing or editing of this review.

More about The Standoff at Sparrow Creek