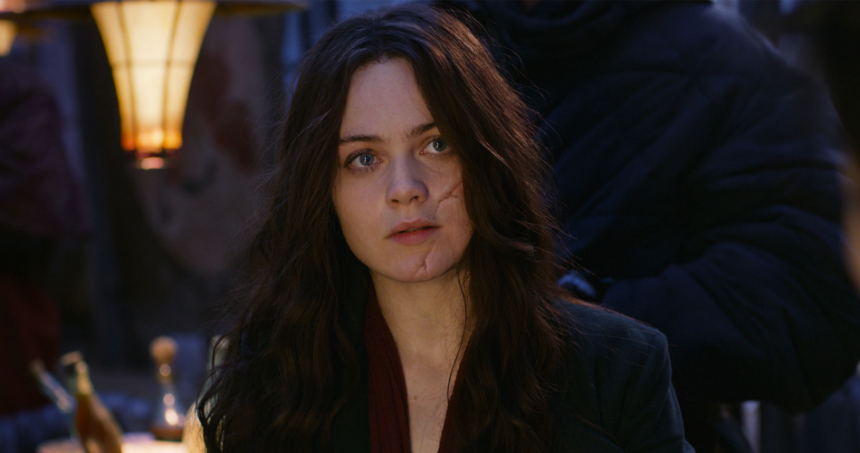 Lumbering rather than rolling, Mortal Engines allows plenty of time to become distracted by bountiful, finely-detailed, sprawling scenery as it crawls through the wreckage of Earth, thousands of years after the planet was torn apart by war. There's not much else to do.

Based on the first novel in a multi-book series by Philip Reeve, the film quickly blurts out its frankly ridiculous premise in voice-over narration: the surface of the Earth was ripped apart by the apocalyptic Sixty Minute War, destroying all nations as we know them. Mankind eventually built "static" cities, anchored in one location, but some also built "traction cities," constructed on giant caterpillar tracks so they could travel through the ruined landscape and "ingest" what few precious resources remain.

Built in the architectural style favored by the Ancients, traction cities consume everything in their path. The traction city of London has crossed a land bridge to Europe and is now ... blah blah blah ... zzz.

As with Aquaman, it's a patently ridiculous premise, but unlike James Wan's delightfully fizzy superhero entertainment, Mortal Engines takes itself far too seriously, a problem that is compounded because it lacks sufficient dramatic weight in the first place to support its narrative and the characterizations are flat. Consequently, as impressive as the film looks, it simply doesn't fly as any sort of compelling epic.

Perhaps because Peter Jackson co-wrote the screenplay and serves as one of the producers, Mortal Engines reminded me of his version of King Kong (2005), only without the ape. Jackson expressed interest in adapting the book a few years later, about the time that his wispy adaptation of The Lovely Bones (2009) appeared in theaters. 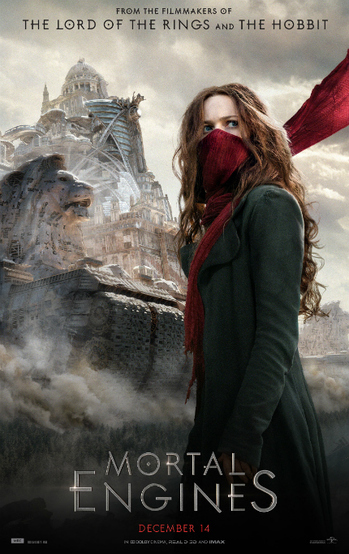 Jackson, working with his usual writing/producing collaborators Fran Walsh and Philippa Boyens, relies upon the major plot points and characters in Reeve's novel, which was first published in 2001. The premise may be nutty -- Yikes! Someone put wheels on ... cities?! -- yet it opens up untold, fantastical possibilities for the storytellers. It's a pity that so few of those possibilities survive to the screen.

In a future mobile London where residents work in various guilds that then determine their economic and social standing, Tom Natsworthy (Robert Sheehan) is introduced as an apprentice historian. He catches the eye of an important dignitary, Thaddeus Valentine (Hugo Weaving), head of the Historians' Guild, who is developing a new source of energy that will save the city.

Tom admires Valentine greatly and does not hesitate to save the man's life when a young masked woman attempts to assassinate him. In frantic pursuit of the mysterious figure, Tom is dismayed when, just before she escapes, she tells him that Valentine was responsible for the death of her mother, Pandora Shaw. When the great man Valentine arrives on the scene, the puzzled, disbelieving Tom naturally tells him what she said, prompting his hero Valentine to kick him off the rolling, ever rolling city to his doom.

Forced to team up with the would-be assassin Hester Shaw (Hera Hilmar), Tom soon learns how little he knows about "how things really are" as they trudge through the ruined lands and embark on dangerous adventures together. Hester is much more capable and knowledgeable than Tom, and appears to be a natural leader.

The film, however, is committed to the idea that the two will share the role of protagonist, which plays out in awkward fashion, in part because the actors do not appear to spark together, nor they do they appear to be comfortable when they are called upon to act against vast empty spaces on screen that were filled in with CGI during the post-production process.

Both actors have shown their thespian abilities in other screen projects, so perhaps the discomfort and lack of chemistry is intended to reflect the hesitations and suspicions of the characters. It's difficult to say, because the script is far more concerned with explaining an alternate civilization that still faintly resembles our own, rather than creating compelling characters whose drives and motivations come to the fore through their actions.

Instead, the characters explain themselves by narrating flashbacks. While Hugo Weaving is splendidly villainous as a well-intended and woefully ambitious government leader, even his efforts are frustrated at a point when he should become more integral to the story.

Christian Rivers served as splinter unit director on two of Jackson's Hobbit films, and also as second unit director on David Lowery's Pete's Dragon; he also brings to bear vast experience as a storyboard and visual effects artist on Jackson's films for years. Making his feature directing debut, however, Rivers is not able to bring the beautiful, effects-heavy production fully to life.

That leaves Mortal Engines -- and the audience -- crawling through the wreckage in search of something ... better? It's hard to say.

The film opens in theaters throughout the U.S. and Canada on Friday, December 14.

Do you feel this content is inappropriate or infringes upon your rights? Click here to report it, or see our DMCA policy.
Christian RiversHera HilmarHugo WeavingPeter JacksonRobert Sheehan