Now on Blu-ray: Brad Bird Does It Again In INCREDIBLES 2 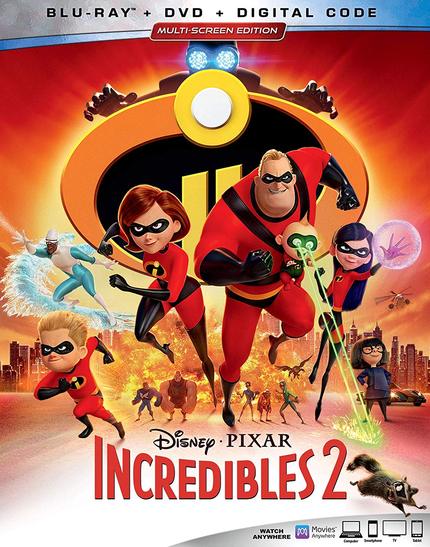 The Parr Family is back in action in Incredibles 2, the long awaited sequel to Brad Bird's fan favorite Pixar film from 2004. This next chapter in the saga of Mr. Incredible, Elastigirl, and their super children picks up right where the previous adventure ended. The family, still incognito and illegal as superheroes, fights the villainous Underminer - exactly where the film film ended - and the resulting damage to the city puts them back on the bad side of the public, who are wondering how they are going to pay for all of this seemingly overzealous heroism.

In steps entrepreneur Winston Deavor and his sister Evelyn with a plan to get heroes back in the public eye with a positive publicity campaign designed to remind the citizens why they loved Supers in the first place. The plan works well at first, with Elastigirl taking the lead as the face of the new PR blitz, but soon enough, things start to go sideways and a mysterious supervillain known as Screen Slaver takes control of the superheroes minds and forces them to take unspeakable actions against the Incredible family that will all but ensure that they'll always be outcasts.

Bird's execution of this story is exceptional, and incredibly layered. He takes on not only the idea of the superheroes and the real cost of vigilantism on the city, but also gender roles, the challenges of working parents, the terror of adolescence, as well as discovery of a child's new abilities and talents that no one was expecting. It's an exciting film that never forgets that it's supposed to be fun, and it fires on all cylinders.

Andrew Mack reviewed the film upon its release and said,

"Once again, Brad Bird and Incredibles 2 prove that this franchise is as good as animated classic superhero movies will ever be. Bird simply can do no wrong when it comes to animation. His story expertly balances the mystery and action of Helen’s story with laughs of plenty as Bob navigates Violet's adolescence and Jack-Jack's superpowers, while discovering his other superpower, taking care of his kids."

Disney's new Blu-ray release of Incredibles 2 is impeccable in terms of the usual audio/visual metrics, so no need to waste a bunch of digital ink there. The new film far outpaces the technical aspects of the original, and there's not a pixel out of place on this Blu-ray.

Disney presents Incredibles 2 in a 3-disc Blu-ray edition in which one disc is reserved for the film and a few extras, with an entire second Blu-ray included for even more extras, and a DVD copy of the film. The extras include deleted scenes, a fascinating documentary on Brad Bird's amazing career in animation beginning with his childhood internships and fascinating work with the original Disney animators, and going all the way through his current work, there are mini-docs on the heroes and villains of the Incredibles universe, and my favorite was a little piece talking about the secondary thematic focus on the challenges of parenthood. They've also included the short film Bao that preceded the feature in theaters and an additional mini-movie with Edna Mode.

It's a really solid release, and an easy recommendation for anyone even remotely interested in Incredibles 2.