Review: THE SONG OF SWAY LAKE Sings the Tune of Yearning and Legacy 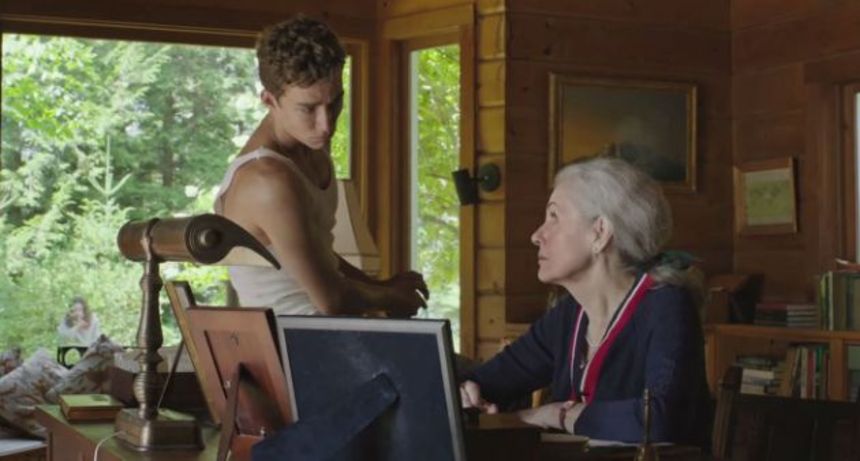 Nostalgia defines the latest feature by Ari Gold, who wrote, directed and starred in oddball comedy Adventures of Power. The deep sense of longing veils every character in The Song of Sway Lake, each one yearning for something different.

Gold sets the mood to jazz age in a grainy images and music of bygone era. As a counterpoint to cheerful scenes of a couple enjoying themselves riding a boat on the titular lake, winter replaces summer as a man drowns himself under thick ice of the very same lake. Two young men in early 20s arrive to the lake in summer of 1992.

The Sway Lake becomes the central axis of story and a location that endured the passing of time connecting three generations of the Sway family. Ollie Sway (Rory Culkin), the youngest one of the family arrives to deserted luxurious vacation house along his buddy Nikolai (Robert Sheehan), a Russian émigré sporting a bad boy attitude, to steal a valuable record that belonged to the family for ages.

Subsequently, Charlie Sway (Mary Beth Peil), Ollie´s grandmother, appears at the lake with her housemaid for the very same reason. "It´s easier to lose a father than a son," a rather cold assertion although with strong undertone of self-pity by Charlie unveils the identity of the drowned man in the intergenerational dramedy.

As the population of characters grows, Gold gives each one of them a distinct voice and story shattering the central plotline into several arcs running in parallel and frequently intertwining. Furthermore, each sub-story uncoils under different genre and topical umbrella as the characters mingle and mix in various combinations.

Ollie and Nikolai´s bromance bears similarities to coming-of-age summer camp films, Ollie and Isadora, a girl next door, share an awkward romance, grief-stricken Ollie and Charlie encounters are defined by implicit antagonism as well as Ollie´s mute accusations regarding his father´s suicide, Charlie and Nikolai´s develop not exactly Harold-and-Maude relationship.

The couplings reshuffle to deepen the fragmentary narration resembling more a composition of a classic play however Gold keeps the plot advancing in a linear fashion ultimately reaching collective climax as well as denouement.

The writer-director keeps carefully pacing the gradual emergence of characters´ insecurities and what exactly they long for and what the rare record has been a substitute symbol of. The wild Russian boy turns out to be longing for the privilege Ollie grew up with directly tied to class and nationality which protected him form a tragedies Nikolai had to overcome to step on the U.S. soil.

The Sway Lake itself holds a representative function, a part for the whole, of America, a significant and unifying motive dragging throughout the story. The Song of Sway Lake, an Americana type of film eventually grows into "a collective therapy" session rendered in multi-genre fragments. Gold keeps harmony of the fragmentary narration seamlessly unified by motives and the central topics as well as the tone that veers into different registers as diverse as genres rotating in the story although never hitting the wrong key.

Ari Gold´s latest feature eventually touches on the nature of time, reminiscence, time-capsules the memories become and legacy. The Song of Sway Lake swings in between drama and comedy maintaining counterbalance as the characters recalls their traumas in sun-bathed cabin filled with moody jazz tunes.

Do you feel this content is inappropriate or infringes upon your rights? Click here to report it, or see our DMCA policy.
Ari GoldIsabelle McNallyRobert SheehanRory CulkinU.S.