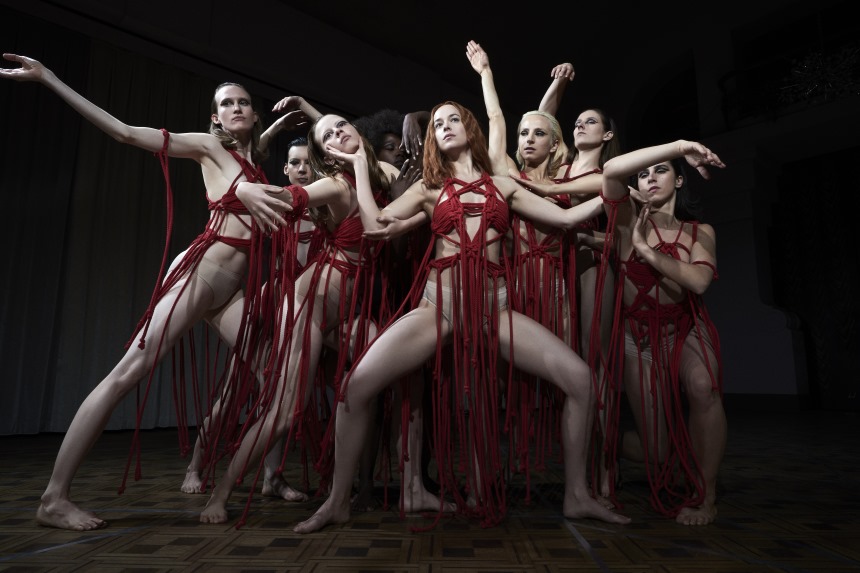 It's honestly difficult to know where to start with Luca Guadagnino's adaptation of Dario Argento's deeply loved and cherished Suspiria. It's a film that understandably seems particularly sacred to the Italian critics here at the 75th Venice Biennale, and Guadagnino's take does seem to have provoked knee-jerk reactions in some of them. Nevertheless, I'd advise you a much more cautious response, because this film is something you really have to take away with you - like a curse.

The first thing you should arm yourself with on your journey into this labyrinthian, but electric 152 minute reworking of Suspiria is that - spoiler alert - for better or worse, Guadagnino's film is definitely not a remake. As I rather amusingly heard one viewer remark, this Suspiria is "like trying to look at two horror shows at the same time. Trying to do both at the same time ruins your experience..." Now, I'm not sure that's fair at all, but I do think that if you go into the darkness of your local cinema knowing not to expect an exact replica of your favourite classic, you'll get a lot more from pretty this surprising gear changer from Guadagnino.

Instead, you should expect only occasional hints or impressionistic strokes that bare a resemblance to the original. At most, the director has taken a few things he liked from his predecessor, and then gone entirely his own way. It's definitely a bold move, and has had mixed results, but it probably was the right decision, because the director could have never pleased fans simply by remaking the original. That would have been completely superfluous, anyway.

Unfortunately for Guadagnino though, some things about Argento's work were so pure that the unavoidable comparisons can be quite unfavourable. Gone is the incredible neon cinematography of Argento's impeccable original opening scenes. As is some of the very artistic, conceptual slight of hand, like the lights of the taxi stabbing their way through the trees on the approach to the dance academy. In comparison, Guadagnino's opening seems visually drab, and has taken a totally different, more cryptic approach - even more so than Pat's crazed rant as she flees the school in the original.

Instead, Guadagnino comes at things from a totally different angle, painting the events that lead to Patricia's disappearance. Landing us slap bang in the middle of the late 1970s of the original film's release date, this Suspiria has a whole extra Gothic layer, with all of Berlin's society seeming to be in strife, and Patricia edging gingerly on the fringes of a left-wing Baader-Meinhof Group riot. Quickly, she scuttles off into the office of a therapist (with a very weird voice that could only work in a Suspiria film), and in a jibberish that hardly makes sense, raves about Miss Markos and how she thinks they might be witches.

Then in another confusing sequence, we see American men treating an old bed-stricked woman in a rural farmhouse - her heavy, uneasy gasps directly recalling the breathing of Miss Tanner in the original. It's all one very riddle-filled opening, and definitely quite an interesting interpretation, which slowly falls expertly into place like a satisfying puzzle as the film progresses. Just sadly all the neon glory of Argento's Berlin is gone, and in their place you find something not unlike the Berlin of today - a grey and much more melancholy place.

In fact, throughout the entirety of this Suspiria, as Susie slowly court the attentions of Madame Blanc and her wicked covenant (rather than rejecting them this time), you cannot help but feel that Guadagnino's update has been braced for a hostile reaction from die-hard fans with such wider references. The director seems to have tried to protect himself by inserting lots of very interesting and rich contemporary trends, that will hopefully charm audiences even if they worship the original. So whilst the Mean Girls-esque academy of the original seemed to feature dancing for little other reason than to put Argento's very angular actresses in leotards, Guadagnino has taken this motif like a stake to the heart, and thrust his Suspiria into the world of contemporary dance.

Definitely still centering on strikingly angular stars like Johnson and Mia Goth (if not quite as ridiculously slight as their '70s conterparts), contemporary ballet becomes a spell-binding talisman in Suspiria's new tool-belt of evil. And whilst what we see is not necessarily the most incantatory dance-in-film scenes ever, Johnson's swirling, twirling, jutting and convulsing does become a truly interesting conduit for casting spells, and makes the movie one hell of a visual triumph. The soon-to-be-iconic scenes in red-string dresses, in particular, are mesmerising, and perhaps the first time that this film truly burns with hell fire.

On top of that, Guadagnino seems to have also insulated himself against the absence of that completely unforgettable wailing, beating original Goblin soundtrack by securing the vast talent of Thom Yorke to produce his own, very different, melancholic soundtrack. In fact, this approach as a whole seems to have compelled Guadagnino to poach lots of things from other cinematic reference points too, like the maddening allegorical intensity of Aronofsky's recent Mother! or the world-spinning artsiness of Kubric's 2001: A Space Odyssey. In doing so, he has definitely succeeded in making his Suspiria something that cannot just be compared with the 1977 classic.

Perhaps what's most interesting about this process to always create more than a lookalike is the way that 2018's Suspiria behaves almost like a superhero prequel. It's as though Guadagnino sets out to enrichen  the Suspiria universe, and explain a lot of its prexisting mythology. Guadagnino's story explains a lot about the history of the witches and their internal disputes, for example, and in doing so definitely succeeds is avoiding the narrative insanity that the original had. I don't think that's any bad thing, either. The weirdness of Argento's sotrytelling was certainly part of its charm, and no doubt partly why Suspiria became such a cult classic. But straightening out some facts has definitely allowed Guadagnino to tell something much more complex and sturdy in his lengthy runtime.

In fact, the whole mission to rework Suspiria actually makes for a great magic mirror onto modern cinema and the genre of horror as a whole. The kind of kookiness and bat-shit-crazy dubbing of the original simply wouldn't fly with horror audiences today. Horror viewers now expect bone-crushing violence, supreme visual darkness and an underlying straight-faced seriousness. Plus, they definitely need a certain realism to make their horror even more intense. And that's exactly what Guadagnino has given them. He's just ironically completely failed to update the objectification of his actresses in the process - because trust me, all the actresses over 30 do an exceptional job of keeping their costumes on in this film.

Nevertheless, I don't know whether to hail 2018's Suspiria as a new masterpiece, or mourn for the artistic flare that bled from every pore of 1970s cinema. It's certainly sad that so much of today's money-making cinema rests on the laurels of past successes. But this movie is a smash-hit example of how you can create new flames from the ashes of a classic. Guadagnino has also done a great job of not letting horror become too literal, but it has to be said that it feels like some of the brightness of the artistry that used to exist seems to have been lost.

But even if I fail to decide whether Guadagnino's Suspiria is brilliant or not here, I cannot deny that the movie continues to sit on my chest like a nightmare-inducing demon. It will take a lot of time to process, like a trauma, and that's no bad thing for a film to achieve. So I summon you to re-enter the hell pit of Suspiria, and see if it makes you feel the same.