Directed by Joe Pearlman and David Soutar, the documentary examines the British band Bros and the brothers who formed its heart and soul. 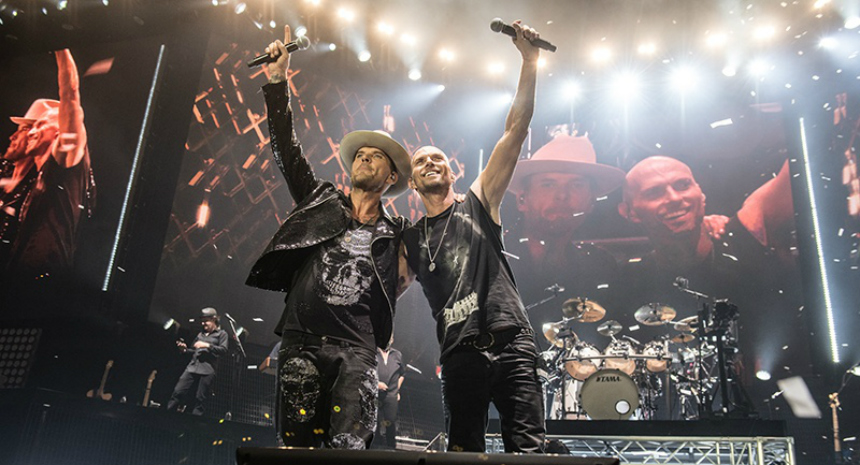 'What if I told you I'd never heard of Bros until yesterday?' -- Reporter.

As an American with little interest in mainstream popular music during the late 1980s, I fall into the former camp; I'd never heard of the British band Bros until yesterday, when I watched the documentary After the Screaming Stops, directed by Joe Pearlman and David Soutar.

It tells the engaging story of identical twin brothers Luke Goss and Matt Goss, who rode the rocket of fame to its heights and then went their separate ways, personally and professionally. Framed around the 30 days leading up to their reunion concert, the doc also sketches out the basics of their lives, growing up in London and then ascending quickly into stardom, as well as the troubles they experienced in their own relationship as brothers.

Luke Goss is the bare-headed drummer, who later became an actor (Blade II) and filmmaker (Your Move). Initially, he appears the more pragmatic of the two; he has been married a long time. He is also 11 minutes older than his brother.

Matt Goss is the singer who remains in the music business; he recently enjoyed a successful residency at a Las Vegas hotel. Initially, he appears the more ethereal of the two; he is apparently single. He also says he feels more like the older brother sometimes.

The titular "screaming," by the way, is a reference to the reaction by devoted, mostly female fans. What happens after fame diminishes? It would seem to outsiders that peace and quiet would be a welcome relief, but the brothers make their differences known by the separate career paths they pursued afterward.

Their relationship is fraught with anxiety and stress during the lengthy rehearsal process; they dance lightly around their differences as though they are in a minefield. When one of them slips, the other musicians and various associates in the room look resigned rather than surprised; they suspected a fiery argument or two or three or four would break out at some point, so they remain quiet and try to avoid any collateral damage. One begins to wonder: will they make it to their reunion concert? Or flame out before it happens?

Well-filmed and nicely-assembled, the documentary does a little dancing itself, paying tribute to the boys' devoted mother, while barely mentioning other members of the family. Where it goes into detail is in the voracious nature of the British musical press at the time of Bros' initial fame, as well as the pitfalls of their celebrity status, which certainly remains relevant for those in the entertainment business.

The loving, sometimes stormy relationship between the Goss brothers is the focus, however, making After the Screaming Stops a fascinating watch, especially for anyone who has ever experienced sibling rivalry.

The film enjoyed its world premiere at Fantastic Fest.

Do you feel this content is inappropriate or infringes upon your rights? Click here to report it, or see our DMCA policy.
BrosDavid SoutardocumentaryFantastic Fest 2018Joe PearlmanLuke GossMatt BossUK