Review: The Wife is marvelously married to the concept of delivering a solid examination of marital malaise 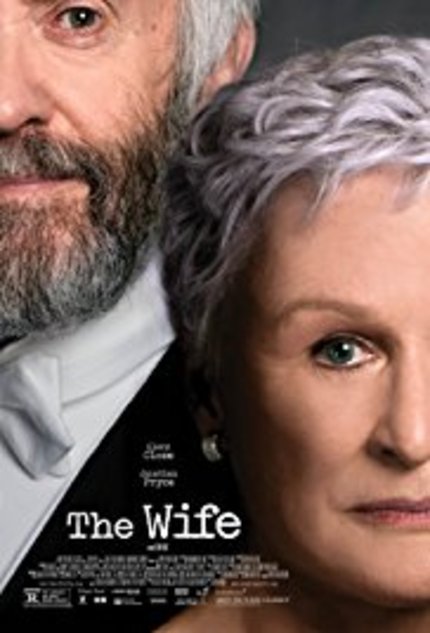 Instinctively, The Wife embodies every notion that "behind every successful man there is a good woman" or something to that effect. In the case of Swedish director Bjorn Runge's ("Happy End", "Daybreak") literate marital melodrama this known sentiment stretches beyond the simplicity of that common saying. Indeed, The Wife has a captivating way about its quiet explosiveness that feels so effortless in its character study of elusive female empowerment at the helm of a troubled marriage and the contained emotional boundaries that are looking to burst from years of matrimonial malaise. What could have been essentially a cliched and conventional look at a typical marriage at the crossroads surprisingly resonates as a solid drama of conviction highlighted by a convincing and probing performance by Glen Close. In fact, Close's mature allure and strength of character laced with confusion and unfulfillment uplift the storytelling potency in The Wife.  Intelligent, psychologically suspenseful and resonate Runge's template of union bliss gone amiss may very well finally lasso the veteran Close that Oscar statuette that has ducked and dodged her clutches throughout her distinguished career.

Based on the novel by Meg Wolitzer and aided by a skillful and challenging screenplay courtesy of Jane Anderson ("Olive Kitteridge"), The Wife weaves so deliciously as it masterly places its fidgety fingers on the pulse of a long-term marriage saturated with tension-filled build-up.  Secretive revelations, behind-the-scene dalliances, mechanical co-dependency, gentle resentment, hunger for independent thinking and doing--all festers compellingly at the base of Anderson's intriguing script. Considerable strong acting, a sense of underlying urgency and disillusionment plus an attentive detail to unassumingly detached characterizations definitely elevates The Wife into thought-provoking entertainment for receptive moviegoers.

The setting is early 90's Connecticut where heralded novelist Joe Castleman (Jonathan Pryce) resides with his loyal wife of many years in Joan (Close). Legendary country singer Tammy Wynette has nothing on Joan Castleman because if anyone stood by their man and catered to his every whim it was the calming force of Joan's wifey duties. Essentially, Joe would seem lost without Joan's fuss-bucket routine in assuring that her well-read husband is taken care of constantly and consistently. Although Joan has raised her two adult children she is still bounded by her care-taking commitment to Joe's needs.

However, enough is enough. It is safe to say that Joan has finally reached her limit with Joe after burying her personal ambitions and silencing her voice in favor of him becoming the celebrated novelist he is today. Joan has shown undying support for the needy Joe but it is time that she comes to the realization that her unselfish role in being his domestic safety net needs to come to an immediate halt. Joan Castleman is fed up and wants to spread her wings of independence.

If poor Joan thought that Joe was not already insufferable causing her breaking point then that dubious morning phone call from Stockholm should prove dubious. The phone call had informed the Castlemans that Joe won the prestigious Nobel Prize for Literature. Now with Joe's out-of-control ego seeking to be nurtured even further the exasperated Joan rolls with the punches. Inevitably, the long plane flight to Stockholm reveals more problematic cracks in the Castleman's ailing marriage. Watch Joe, a habitual adulterer, flirt with an attractive airline attendant. Witness Joe's indifference to his struggling son David's (Max Irons) writing aspirations in an attempt to follow in his footsteps. Notice Joe's flippant mood swings. Furthermore, Joan is not at ease in how Joe mistreats journalist Nathaniel Bone (Christian Slater) who is accompanying the Castlemans on the airborne trip to Stockholm (he intends to write Joe's biography). To put it bluntly, Joe is getting on Joan's last nerve.

The Wife boasts methodical layers of despair about a surfacing torn woman trying to reclaim her sense of self in the smothering shadows of distant man she has had to overlook for the sake of her family. Both Close and Pryce are uniformly reflective as the broken tandem at the mercy of their withering anxieties. Close's Joan is a bewildered woman placed in an unbearable position of tolerading the nagging peccadillos of a literary louse for a husband. She weathers the storm of a complex marriage and yes...we process her as a wounded soul in the making. Neverthless, Close's resilliency in transcending Joan Castleman's plight beyond the standard suburban wife's slide into complacency is rather simmering in concept. If Joan feels the least bit defeated under the skin this is not necessarily a sign of weakness on her part. Her awakening is authentic because Joan Castleman is no fool to Joe's foibles. Close's portrayal as a spousal pushover up to her limit in domesticated disdain is suitably formidable and nuanced.

Runge enthusiastically chalks up some twisty miles with a blistering narrative conveying its robust adult themes. Pryce's skirt-chasing Joe Castleman soars with devilish pomposity despite his heralded bookworm brilliance. Slater's pestering and poisonous writer Bone with the seedy agenda is on par with the questionable goings-on in the pithy proceedings. It is an uphill battle for Joe and Joan to effortlessly co-exist as acceptable married partners after decades of chaotic togetherness. Still, we are willing to root for that unifying moment that could heal some of the toxicity. Perhaps their pending role as new grandparents courtesy of daughter Susannah's (Alix Wilton Regan) pregnancy might offer a bright light into the marital darkness that persists?

No doubt that Close's sophisticated, high-wire turn as a woman on the verge of self-discovery and potential lends The Wife its dramatic heft and introspection regarding stalled womanhood of a different hue.