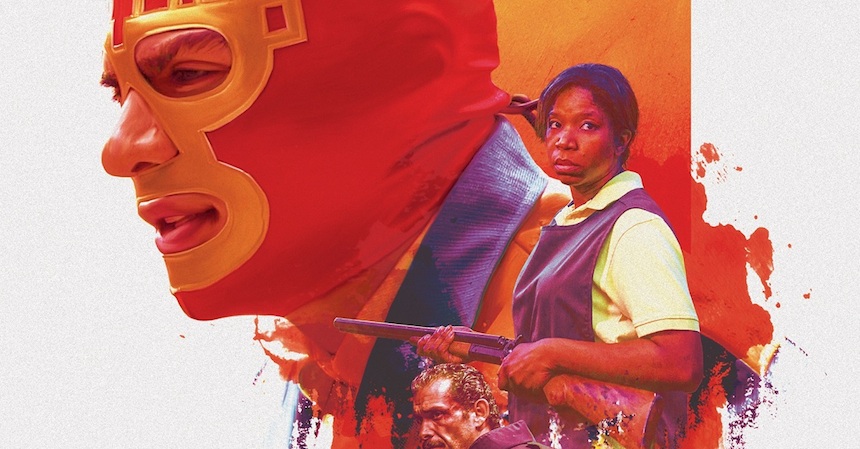 Somewhere in L.A., a Mexican wrestler with anger issues, an ex-con with a swastika face tattoo, a motel manager trying to buy a black market organ, and a gangster and his daughter all collide in a series of unfortunate, hilarious, and fully loaded situations.

It was at Fantasia 2017 that I first saw Lowlife. This was mainly because the programming and PR teams were wild about it -- and for good cause. Director and co-writer Ryan Prows' first feature Lowlife is like Pulp Fiction on a budget, and there is a reason why so many reviews compare the two. This past fall, a sprecial screening at AFI was set up for Quentin Tarantino to watch Lowlife.

Full disclosure: I hosted the Q&A. I can say that Tarantino (and the audience) went bonkers for the film. Prows and his team have a very bright future ahead of them, this is for sure.

If this indie film flew under your radar, now is your chance to catch it on Blu-ray or VOD. There isn't much more I can say about it that we haven't already covered, as we're big fans of the film here at ScreenAnarchy. For a full review, here's Kurt's. You can also check out a clip here and read my interview with Prows here.

After three viewings, I can say that the film blows most feature debuts out of the water.

Lowlife looks great and sounds great on this home release. The film itself is absolutely kinetic; if you want to be entertained and surprised by a film (my holy grail), watch Lowlife immediately. I'll be watching anything that Prows has coming down the line, without a doubt.

To pre-order this tense and blacky comic crime drama, click here. Watch the trailer below for a little flavor of Lowlife.

Do you feel this content is inappropriate or infringes upon your rights? Click here to report it, or see our DMCA policy.
IFC MidnightRyan ProwsScream Factory