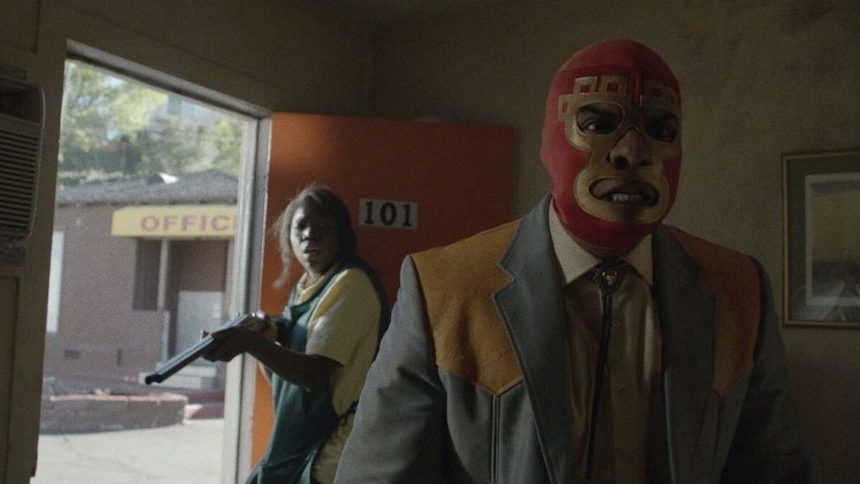 As a snappily dressed Luchador intensely monologues his desires and legacy to the camera, we are unsure of exactly who his audience is, and the movie withholds the answer to maxim effect.

A dirty Immigrations Officer and a scuzzy surgeon run an organ-harvesting scheme and whore house (depending on the age and gender of the illegal immigrant) in the basement of a fish taco joint. A woman scrambles to keep her life together with her alcoholic husband, rundown motel, and the unquenchable guilt of giving up their daughter for adoption years ago. A skinny white guy sporting a swastika tattoo covering his entire face is picked up by his black friend who has gone legit as an accountant.

These are some of the deceptively broad caricatures at play in Ryan Prows' debut feature, Lowlife, which, with its out of order narrative structure and nondescript Los Angeles borough setting, runs the risk of being written off as just another Pulp Fiction clone. Remember how the late 1990s were littered witch such mediocre monstrosities?

Right from the opening titles, Lowlife belies any notion that this is a 2 Days In The Valley released 20 years after the fact. There is a confidence, nay a swagger, to the editing rhythms, sound design and narrative beats, that elevate the movie considerably beyond the blood, gore and often absurdity that the movie is not shy about splashing on the screen. And the scrambled narrative structure is in full service to the nature of the storytelling (no stylistic crutches here).

The chapter breaks at key moments amplify and unravel our pre-conceived judgement of situations, and characters, in delightful ways. Even the cinematography, shot with a grainy digital source, feels more like an aesthetic intent, over the filmmakers trying to work around a low budget.

The devil here is in the details. Take the central location of the rundown motel run by Crystal, all the characters will intersect here at one point, but the director focuses on the detail of the automatic door-chime of the tiny and cramped managers booth, and how shockingly loud it can be when trouble comes walking through the door.

Trouble is, of course, always walking through the door. This is rhymed with the sound cue of the Luchador's penchant for blacking out during moments of extreme rage.

Or gangster-surgeon Teddy-Bear (a wonderfully sleazy Mark Burnham, familiar to fans of the bizarre as the creepy cop in Quentin Dupieux's Wrong and Wrong Cops) who sports a number of flamboyant button down shirts that are both shorthand for his colourful character, but also a way of telling where we are in the fractured intersection of timelines.

Prows and his rather large team of five writers (or rather collaboration with his actors) take what is normally the purview of upscale television, namely, lay out an ecosystem and a collection of easy to pigeonhole character types, and then let the narrative undermine the expectations of the audience. Think of the New Jersey gangsters or Deadwood cowboys and how those shows humanized and stretched the notion of what those 'worlds' were and how recognizably human they could be amongst the filth.

Lowlife does in a brisk 96 minutes what a 10 hour series does with the luxury of space and breathing room. To do this takes a bit of brio and a lot of talent. This is evidenced here in spades, with a game cast that somehow find the humanity in the extreme plights of their characters, and the zig zag of situations that go from silly to horrific to wellspring-emotional at the drop of a hat.

You might arrive at Lowlife due to its rather gonzo set-up (pitched to "11" in the trailer), but the empathy and heart (and fairy-tale ending) are conjured in the way that only good cinema can do. It is the filmmaking that seals the deal in this offbeat gem.