The Golden Leopard-winning film re-imagines a social realism drama as a neo-noir thriller. 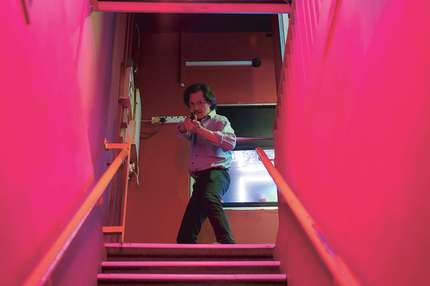 The young Singaporean director Yeo Siew Hua bagged the coveted top honor at Locarno 2018, the Golden Leopard, for his sophomore feature A Land Imagined. Siew Hua scored a surprise win even though his film generated a buzz thanks to seamless amalgam of neo-noir thriller and social realist drama.

In a carefully researched and investigated topic of foreign labor working on propelling Singapore among the fastest developing countries, the writer-director approached immigrants slaving to provide for their families at home and documented the emotional, psychological and physical toll. The splendor of towering buildings comes at cost of sweat, tears and blood of anonymous workers.

Among those migrant workers belongs one of the film´s main characters, Wang, who after a work accident fears for repatriation and works as a driver for the company until his hand cures enough so that he can return to original line of work. Sleeping in a stuffed worker´s dormitory, Wang suffers from insomnia and starts frequent a cyber café across the street.

The writer-director capitalizes on the distorted perception of reality through Wang´s sleep deprivation as he encounters a brash cyber café operator Mindy and mysterious gamer playing mind games on him.

Siew Hua interweaves several characters into a loosely tight crime plot. Wang remains the front and center even off-screen as a police investigator Lok attempts to finds him. Mindy and Wang´s friend, Bengali laborer Ajit he tried to help to get home, lead the supporting cast, they role in the story more enigmatic and rather agents to flesh out the main protagonists.

Appropriately to sleep deprived main character, Siew Hua deconstructed the linear narration and Daniel Hui edited it into an oneiric excursion through confusing chronology withholding which events uncoil in retrospect and which in real time.

While going back and forth in time and back and rotating between the inspector and Wang, A Land Imagined builds an aura of a mystery and "owls-are-not-what-they-seem" vibe coagulates encompassing the spatial setting - the collective and passive character being the city itself.

Navigating the incandescent narrative maze and bleak fates of the film´s characters, the collision of arthouse drama and genre filmmaking persists in Siew Hua´s case less accommodating to mainstream audience in comparison for example to The Report on Sarah and Saleem (read the review).

This is largely due to the director´s adamant preference to enigmatic storytelling and a rather punk approach to the narrative. It has its charm, especially in a scene where mysterious gamer doubles as an oracle.

No matter how bold the move is, it only tears greater fissure in the plotline, the chronology and the nature of the character thus detracting viewers unaccustomed to such narrative trickery. Nevertheless, even such deception does not overshadow the alarming message of A Land Imagined.

Do you feel this content is inappropriate or infringes upon your rights? Click here to report it, or see our DMCA policy.
Locarno 2018Yeo Siew HuaSiew Hua YeoLuna KwokXiaoyi LiuJack TanPeter YuMystery