Fantasia 2018 Review: INUYASHIKI Is Sato Shinsuke At His Very Best 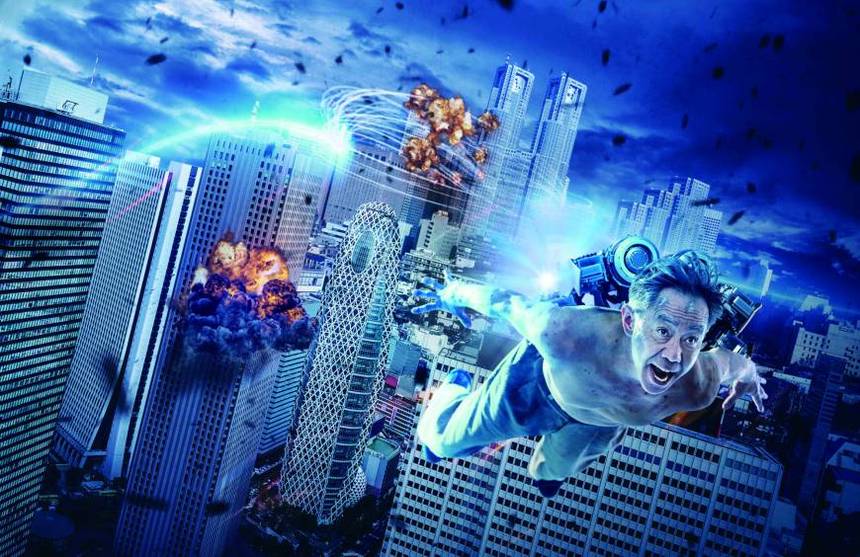 Sato Shinsuke knows his way around a manga adaptation. After half a dozen successful such endeavors, it's really little surprise that his latest film, Inuyashiki, is another adaptation of a written work that was also recently adapted in anime form for Amazon. Sato had a big festival hit a couple of years ago with his version of Hanazawa Kengo's zombie book, I Am a Hero, and before that with films like The Princess Blade, Gantz, and Library Wars, all of which are amazing films, which leads me to my next bold assertion: Inuyashiki is Sato Shinsuke's best film yet.

Now, full disclosure, there are still a small handful that haven't made it out of Japan and that I haven't yet seen, but of the big ones that have, Inuyashiki definitely takes the crown. A deft adaptation of a popular story that understands both its subject and its audience and imbues what could've been a very simple whiz-bang story with a heart three sizes too big for its body, Inuyashiki is a modern science fiction masterpiece.

An aging salaryman and a disaffected teenager are standing in a park late one night when an alien encounter leaves each of them newly reborn as robotic recreations of their former selves. Given abilities that allow them to heal and destroy in equal measure, the young man takes his raging hormonal angst and bitterness out on the whole of Japan, beginning a random killing spree that leaves the nation in terror, while the older discovers his ability to heal and uses it to bring hope to one terminal patient at a time. At first they don't know about each other's existence, but once they do, they realize that the only way each one can continue on their paths is to destroy the other.

Sato Shinsuke's work is consistenly excellent in that he understands what adaptations of these types of properties need to be successful. Far more than simply rewriting existing stories for the big screen, Sato's focus is on telling stories that exist in the world of the manga, but with a remarkable amount of depth that surprises the audience every single time.

In Inuyashiki, it's a story about trauma, healing, and finding what it takes to overcome the darkness within. Inuyashiki, the titular salaryman played with remarkable aplomb by Kinashi Noritake, is a remarkably nuanced character. Disrespected by his family and his boss and suffering from terminal cancer, Inuyashiki sees his transformation as a chance to finally make an impression and bring light to the world, even if he does it in secret. He's all but given up on life, and so when the cancer diagnosis comes, it seems fitting. When Inuyashiki gets up the courage to call his family to tell them about his diagnosis, all of them ignore his call, so he decides to keep it to himself. He worries that they wouldn't even cry if he was gone. And he's probably right.

His daughter Mari (Ayaka Miyoshi) hates him. She believes him to be a drain on her life, often complaining that he's so old that her friends think he's her grandfather. She refuses to be seen with him, and all he wants to do is make her and his wife, an irredeemable shrew in one of the film's rare sour notes, happy. Mari ignores his calls and shows him nothing in terms of love or affection, even in his darkest moments.

The teen, Shishigami Hiro (Takeru Satoh), on the other hand, discovers his new found abilities and goes completely insane. Plagued by teenaged insecurity and myopia, Shishigami takes out his frustrations with a wallflower of a mother and a father who he sees as having abandoned him and started over again with a new family on anyone he can get his hands on. After leaving his father's house one evening after a discussion about college plans goes awry, Shishigami hears a happy family celebrating their daughter's success and it sets him off. The family are his first victims, beginning a murder spree that will leave no one untouched and everyone in Japan unsafe.

At the same time, Inuyashiki discovers his ability to heal and begins visiting the hospital and giving despondent families the hope and joy he cannot have from his own wife and children. In this way, Inuyashiki is very much a story about trauma and finding ways to literally and figuratively heal yourself and those around you. Shishigami prefers to revel in his tragedies, while Inuyashiki takes the opportunity of a lifetime to make the world better.

Shishigami's rampage makes the front page and soon Inuyashiki realizes that he's the only one who can stop him, leading to an extended battle sequence that leaves much of Tokyo under piles of rubble, but will also tug at your heartstrings. The story of Inuyashiki is of redemption and of hope, it's a brilliantly written script brought to life by a filmmaker and cast who do amazing things with what could've been just a silly diversion. Potentially one of the best films of Fantasia this year, Inuyashiki is absolutely breathtaking on every level.

As with any comic book, manga, or anime adaptation, there is always the question of where is my entry point into this material. Too often these stories, when written for the screen, have so much heavy lifting to do in terms of setting up the world of the characters, that it leaves relatively little space ot tell an emotionally engaging story. Thankfully, Inuyashiki is very self-contained, eschewing extraneous details to focus on the crux of the story and getting to the action right away.

While technically still an origin story, Inuyashiki never cares to move backwards through the story, instead telling the audience just what it needs to know in order to push the narrative forward. I'm not a manga reader, or a comic book reader for that matter, but even the best of these types of adaptations, including the critically lauded Marvel films, spend a lot of time giving background stories that don't help the films in any practical way, leading to hours of unnecessary fan service. Sato understands the difference between the written stories and the film adaptations and uses his film knowledge to properly adapt these stories for a new medium rather than simply using comic panels as story boards.

Inuyashiki is a marvel of a film, the kind of manga adaptation that anyone, fan or otherwise, can enjoy and experience with all five senses. The action and visual FX are top notch, the story is quick moving and engaging, and the performances - especially from Kinashi Noritake in the title role - are uniformly excellent. This is one of the best live action comic films I've ever seen, and I can't wait to see it again