Review: WON'T YOU BE MY NEIGHBOR? 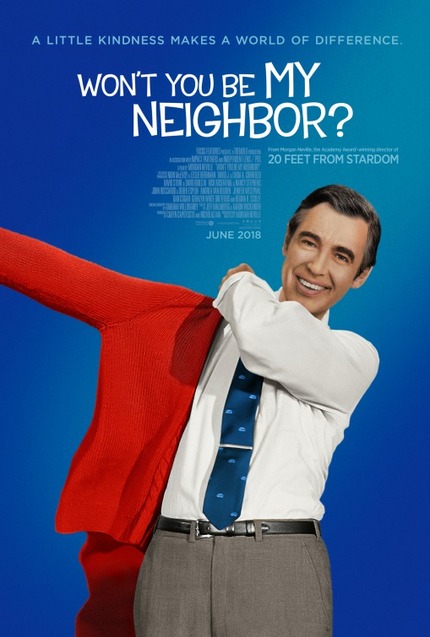 If you were a child growing up in the United States between the late 1960s and early Aughts than you no doubt watched, remember and were shaped by the educational children's program, Mister Roger's Neighborhood on PBS. I was born in 1983, and with parents in education, Mister Rogers was my first direct experience with televised media; a very conscious effort on the part of my parents. But more on my own personal journey with Mister Rogers in a bit...

With Won't You Be My Neighbor? Oscar-winner Morgan Neville (20 Feet From Stardom) turns his affections for artists and creators to one Fred Rogers, a sweater and sneaker wearing Presbyterian minister from Pittsburgh, PA who used his own childhood hardships with illness and bullying to cultivate a groundbreaking children's program in a time when most television for kids was still about pies in the face and hammers to the head.

Riding the wave of innovative behavioral science around child development in the 1950s and '60s, Mister Rogers crafted what is described in Neville's documentary as a show that operated in slow time, but one that did not waste time. Indeed, Fred's penchant for quiet if whimsical rituals like feeding his fish invited children into a familiar space, wherein Mister Rogers could encourage stories, songs and sharing around how to deal with feelings of anger and sadness, national tragedies, racism, xenophobia, music, art and culture. All of this and more was carefully and cleanly measured and filtered through Fred's calm cadence and sparkling soulful eyes that invited children to come as they were. Mister Roger's Neighborhood as a show, and as a philosophy, was a space where you could be you and you could be loved and listened to no matter what.

Deftly weaving a bounty of marvelous archival footage spanning over 40 years, with a sprinkling of talking head interviews with Mister Rogers' cast and crew, as well as his wife Joanne and sons John and James, Neville crafts a gentle and enduring chronicle of one of 20th century America's most compassionate radicals.

While the critique could be made that you can't make an interesting film (IE one with conflict) about a kind man who taught tolerance and peace through a medium that often preached the opposite, I will not be the one to argue it. Won't You Be My Neighbor? is indeed a celebratory work on a singular visionary, but it does nothing to aggrandized a man that would not wish to be put in such a position. Neville harnesses the warm and attentive spirit of Fred Rogers and his television universe to offer up a portrait of self-actualzation by empathy for and engagement with others. Fred's numerological philosophy boiled down to "143", the weight he kept his entire adult life, but also the numerical count for "I Love You." This is a story of a man who to heal and grow from his own childhood dilemmas had to embrace them by offering what he didn't receive to as many children as possible.

In the brilliant opening scene of the film, we see a young Fred Rogers sitting at his piano. A well-trained and playful musician, he smiles in a contemplative fashion, offering the idea that his work with children is about understanding the modulations of life, and how like in music, changing and adjusting such modulations, key to key, back and forth, can be tricky. But with practice, encouragement and honest conversation, each and every one of us can get a handle on these modulations. This moment is funny, philosophical and charming, essentially summing up the entire movie and Fred Rogers' himself.

While one's fondness for the material on hand will vary based on whether or not you hold deep impressionistic memories of Mister Rogers that can make you cry tears of happiness with the snap of a finger (like me), in a day and age where the divide between understanding feels greater than ever, it is hard to deny the guiding light that was Fred Rogers and Mister Roger's Neighborhood.

Targeted for pre-k children, the show perfected a creative and inclusive space that endured well into my adolescence and adulthood and showed me that a human being was a loving being. Indeed, I recall one summer when I was attending a film camp, and a conversation arouse between teenagers and young adults about how if they turned on the TV and Mister Rogers was on they would still watch it, not for nostalgia's sake, but because its meditative format still resonated with how they gauged what was going on in their lives.

It's a little bizarre and more than a bit scary to think that we don't have someone like Fred Rogers nowadays. But Fred Rogers wasn't asking us to be like him in the first place. He was simply reminding us to be ourselves.

( Review originally published during the Sundance Film Festival in January 2018. The film will open in select U.S. theaters on Friday, June 8, and then expand nationwide, via Focus Features. )

Do you feel this content is inappropriate or infringes upon your rights? Click here to report it, or see our DMCA policy.
documentaryFred RogersMister Rogers NeighborhoodMorgan Neville

More about Won't You Be My Neighbour