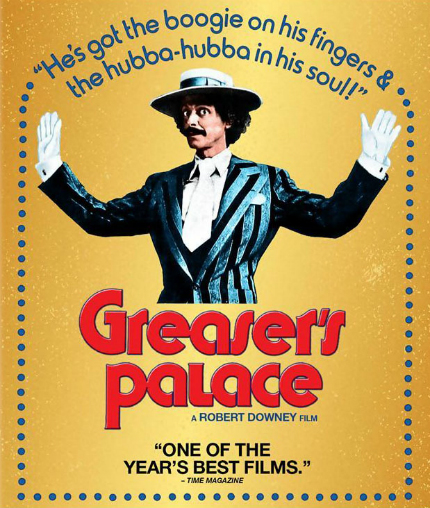 Watching Greaser's Palace (1972) for the first time without having any idea that it was a Christ parable, I was completely bewildered. It's newly available on Blu-ray from Doppelganger Releasing and Scorpion Releasing and looks absolutely lovely. The disc is highly-recommended for fans of the film.

As an innocent in the world of filmmaker Robert Downey, however, I realized I needed to do some research to put Greaser's Palace into perspective. Three of his early films -- Babo 73 (1964), Chafed Elbows (1966) and No More Excuses (1968) -- are available to watch on The Criterion Channel via the Filmstruck streaming service, which began in the U.S. and is expanding internationally. (I have an annual plan, which has been well-worth the cost.)

Downey is rooted firmly in the New York underground film scene and so his films reflect a fiercely independent spirit; the term screen anarchy could easily be applied to his guiding principles, which appear to have been steered by absurdism. Very rough, low, low budget, and making little narrative sense, his early films are bold and fascinating.

Released in 1969, Putney Swope put Downey on the map. Set at an advertising agency that is revolutionized by the titular character, a token Black executive who takes over the company after the death of its founder, the film is an unruly and savage satire of the corporate mentality, the advertising business, and America in the late 1960s.

Film critic Rodney Perkins noted on this site in 2010: "I think Putney Swope is his best film, but Greaser's Palace is right at the top of the list."

Even someone coming very late to Downey's work, such as myself, can appreciate why the film is deserving of that type of praise, as much as anything for the boldness of its vision. In the early 1970s, when revisionist Westerns were all the rage -- think McCabe & Mrs. Miller, or, especially, El Topo -- Greaser's Palace stood out as a distinctive, rangy animal, one that in no way could be corralled into commercial territory.

Allan Arbus plays the Christ-like figure known as Jessy. (I knew Arbus from his guest-starring appearances as psychiatrist Sidney Freedman on TV's MASH, but it's not until now that I learned he had been a U.S. Army photographer during World War II and then became a fashion photographer.) He appeared in a small role in Putney Swope and a few other things before his key role in Greaser's Palace.

His Jessy is a very matter-of-fact fellow, appearing out of nowhere in the Old West and bringing the son of the titular Greaser -- known as "Lamy Homo" (Michael Sullivan) back to life. Jessy is heading to Jerusalem, he says, where he wants to become an actor and singer. He's perfectly willing to do things for other people on his way, though, including curing them of disease -- "If you feel, you heal," he says -- and walking on the water.

The titular Greaser is Seaweedhead Greaser (Albert Henderson) and the residents of the bar / tiny town in New Mexico where he resides live in awe of him, ready to carry out his commands as he wills it. He kills when he feels like it, and his only real complaint is that he suffers from constipation.

The film may be a Christ parable, but mostly it's just very, very funky, with quite a bit of absurdist, nonsense comedy dispensed, or at least attempted. (Stephen Chow might approve, if he ever saw it.) I suspect I will need to watch it multiple times to get the sense of it, but that's a pleasant prospect. It's easy-going and not very serious at all.

Because I am narratively-oriented, and Downey is less interested in that aspect of storytelling, some of the strengths and charms of Greaser's Palace passed me by on the first viewing. Still, Peter Powell's cinematography is gripping in that early 70s roughhouse manner, and I couldn't help but appreciate the audacity of the concept and the daring of the execution.

I very much enjoyed Allan Arbus in the (more or less) lead role. He may look solemn, but his body language is agile and fluid, and he can really fling out zinger lines. The only other cast members I recognized were Toni Basil (as a Native American scout) and Herve Villechaize (as Mr. Spitunia, who doesn't appear until later in the story). Robert Downey Jr., the director's son, also makes an appearance as a young lad. Everyone is on the same page, performance-wise, which adds to the fun.

Downey would go on to direct Moment to Moment (1975), which he later re-edited into a somewhat incomprehensible version known as Two Tons of Turquoise to Taos Tonight, which is available on Filmstruck, and then Up the Academy (1980), which I remember as a disastrous would-be comedy that prompted actor Ron Liebman to have his name removed from the credits.

Sometime in the late 80s, I saw William Friedkin's To Live and Die in L.A., which I loved. Downey has a key supporting role in that film, which I never associated with his films because, of course, I hadn't seen them yet!

More recently, Downey made Hugo Pool (1997), which was fun with a thick layer of weird, something unpredictable and strange that I recall seeing on cable multiple times, without ever quite discerning any deeper meaning. Now, having seen more of Downey's films, I'm interested in revisiting the ones I saw years ago, as well as the ones I have yet to experience.

As mentioned, the Blu-ray from Doppelganger Releasing and Scorpion Releasing looks quite soft and lovely; it's a brand new high-definition scan of the original camera negatives. An on-camera interview by Downey, conducted by Rudy Wurlitzer, runs about 13 minutes and is a good watch; recorded in 2000, Downey tells funny stories about the cast, including his son, and notes the budget and how it was financed. (It helps to know people with the right connections!) Jonathan Demme wrote brief, glowing liner notes.

Do you feel this content is inappropriate or infringes upon your rights? Click here to report it, or see our DMCA policy.
70sAllan ArbusBlu-rayRobert DowneyRobert Downey Sr.Scorpion Releasing