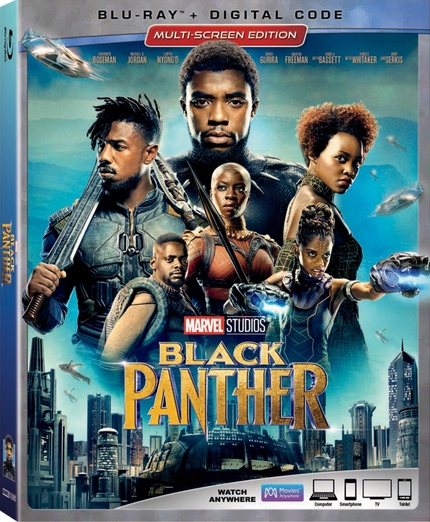 As the superhero movie world shudders in the immediate wake of Avengers: Infinity War (a film I was pretty bored by), this week on store shelves lands Ryan Coogler's (Creed) Black Panther, one of the most successful films of the decade and a surprise hit across the globe.

It's hard to deny the impact Black Panther made not only on the box office and the critical masses, but also on the communities for which it was made. I'm not saying that Black Panther was a film aimed squarely at the African and African-American communites, but it is most definitely a result of the combined power of the creatives in those communites to a degree that is truly subversive in this day and age. It is this ability to crossover from potential niche status - a huge risk for a film with a mammoth budget - to billion dollar behemoth should light a fire under the asses of studios to show them that stories about anyone can be successful as long as they are well made and engaging.

Our Shelagh Rowan-Legg reviewed the film when it opened and was blown away:

Coogler proves himself not only capable of putting together a stellar cast and crew, but steering them while allow their talents to shine. Black Panther is a feast for the eyes, the ears, the heart and the mind, a film that has action, heart, substance, and soul. The future of blockbuster films such as these lie with directors like Coogler (and Patty Jenkins, and Taika Waititi), ones who are bringing much-needed new life and ideas to the superhero genre.

I will admit, that after watching Avengers: Infinity War - right before rewatching Black Panther on Blu-ray for review - I was starting to really feel the fatigue of the cinema of superheroes that has taken over multiplexes around the world. However, revisiting Wakanda and the engaging characters therein and their vision of a future where peace is the main goal, even while maintaining a strong defense for all reinvigorated me and reminded me that there can still be good stories to tell in this overwhelming genre. Black Panther is still a great film.

I have nothing surprising to say about the A/V offering here. Disney has presented Black Panther looking pristine on this Blu-ray disc (I'm not 4K compatible yet), and the sound is quite amazing. For a world like Wakanda, painted with fantastical colors, inventions, and tons of CG creatures and backgrounds, the image quality on this disc is superb with not a pixel out of place. The surround sound track envelopes the viewer and immerses them in the many action sequences in a way that will make you bob & weave in your seat. A fantastic experience.

The extras provided by Disney are typically great as they have been for most of the recent Marvel home video releases. The features start out with a wonderful feature commentary from Coogler and production designer Hannah Beachler which goes into not only the look and action of the film, but also a lot of the themes and motivations of the characters. Really solid stuff. On top of that there is over an hour of bonus material covering the creation of the world, the characters, the women of Wakanda, the tech, the cinematic evolution of the Black Panther character, and much more that is very solid.

My favorite extra, however, is a twenty minute roundtable discussion between Coogler and a group of Black Panther writers, producers, designers, and others in which they discuss not only the film, but the characters cultural importance from his introduction in the '60s through to today. It's a fascinating conversation that shows just how much effort went into making this a film that isn't just about superheroes punching each other in the face.

Black Panther is another stunning disc from Disney and Marvel and well worth having in your collection.