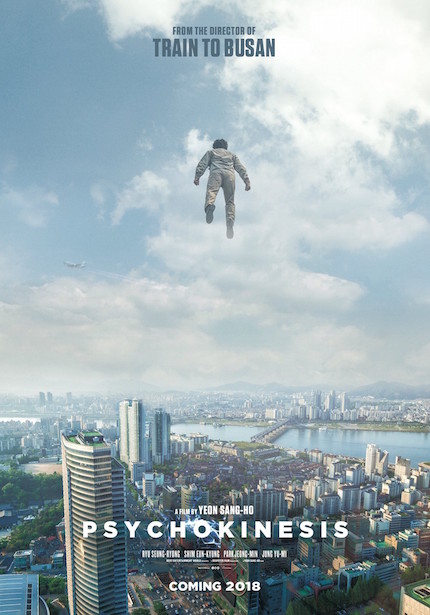 South Korea’s Yeon Sang-ho explored fantastic cinema for the first time with his diptych about a zombie invasion, Seoul Station and Train to Busan. After a couple of totally sordid animated features, The King of Pigs and The Fake, Yeon found some sort of poetic justice in Seoul Station and a taste of hope at the end of Train to Busan, the latter being his first feature length film in which not every main character have a miserable outcome.

Closer to a satisfactory type of cinema, Yeon presents his second live-action movie, Netflix’s Psychokinesis, which keeps him in the fantastic genre and, at the same time, takes him to a new direction. While Train to Busan had moments of pure heroism, Psychokinesis belongs legitimately to the superhero subgenre. Still, Psychokinesis recalls the case of Okja, another Netflix original by a South Korean filmmaker (Bong Joon-ho), because both have a simple story at its core - with a company taking the antagonistic role and affecting common people - but so many other elements and tones mixed that is impossible to considered them as conventional.

Psychokinesis’ protagonists are Roo-mi (Shim Eun-kyung), a renowned young entrepreneur who manages a fried chicken restaurant in a zone that inevitably will be occupied by a construction company that seeks profit through the creation of a shopping mall. On the other hand we have Seok-heon (Ryu Seung-ryong), a security guard whose mundane existence takes a turn when he drinks water that was polluted due to a meteorite fall, and begins developing psychic powers. It’s worth noting that Seok-heon is Roo-mi’s father, though he abandoned his family 10 years ago. The death of Roo-mi’s mother - a consequence of an out of control attack by a group of thugs that work for the construction company - provokes the reencounter between Seok-heon and Roo-mi.

The conflicting relationship between a father and his daughter has been a recurrent theme of the recent films by Yeon, especially Train to Busan. In both the mentioned zombie flick and Psychokinesis, the director follows the imperfect male protagonists as they look for redemption and an improvement in their relations with their daughters; in addition to this, both fathers become undeniable heroes by trying to protect their daughters from, respectively, a horde of zombies and the menacing criminales that won’t rest until they manage to evict the neighbors as the building company is not willing to fairly compensate the victims.

Evidently, Yeon doesn’t forget the sociopolitical critique and that emphasis on the depressing side of society, a characteristic of his work since his debut feature, The King of Pigs. Roo-mi and her neighbors’ decision of bravely facing a company evokes one of the themes of the Brazilian drama Aquarius, while the fantasy element puts Seok-heon in his very own superhero origin story. It’s foreseeable that both plots will come together, and even what will happen at that point, and in that sense, Psychokinesis is so far the director’s simplest narrative.

Nonetheless, and like I already pointed out, this is not a typical superhero movie at all, to begin with because it has a dose of extravagance and absurd humor, akin to Bong’s work, when presenting both the hero’s psychic powers - and the others’ reactions (i.e. an expert thinks the psychokinesis in question comes from the use of a weapon manufactured in North Korea!) - as well as the brutal and crazy villain (Jung Yu-mi) in charge of the construction company and its foul play.

Psychokinesis always leads us to the epic clash between the hero and the antagonists, inherent to the superhero film, and it doesn’t disappoints with its eventual visual spectacle; but it also keeps the story in a more humane margin, stressing on the fact that the protagonist is really only a father trying to be better than yesterday with his daughter. Psychokinesis is definitely not Yeon’s finest film, rather a welcomed effort and a step towards a funnier and more gratifying facet, always bearing in mind tough and relevant issues like the powerful and unstoppable corporations and their corrupt and futile projects that prevail over the individuals.