PSYCHOKINESIS: Trailer For TRAIN TO BUSAN Helmer's Next Is Sillier Than Expected. 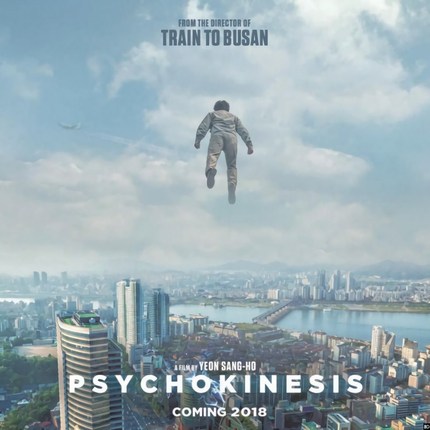 The evolution of director Yeon Sang-ho continues with the upcoming Psychokinesis. The South Korean helmer first rose to international prominence in the animation world thanks to his uber-dark and very much not-for-children animated features King Of Pigs and The Fake before finding massive international commercial success with his live action directing debut Train To Busan.

Train To Busan - a zombie picture set aboard the titular train - was a legitimate global phenomenon and set box office records in multiple countries while also winning a great deal of critical praise so there has been a high degree of anticipation for his upcoming effort Psychokinesis, enough so that Netflix purchased global rights to the film - which will still release theatrically in Korea - back in November.

Now, having followed Korean film for as long as I have in general - and with the transitions this director has been through in particular already - it really shouldn't come as a surprise to say this, but it somehow does: Based on the trailer released last week it appears very much that Yeon is delivering something mostly along the lines of what people will expect with Psychokinesis - i.e. lots of stuff flying around thanks to brain power - but also something very different than expected. Where Yeon's work has been quite serious in approach for the most part so far - calling his animated work grim or dour wouldn't be going too far - this looks, by contrast, pretty goofy. Lots of sight gags and obvious mugging for the camera throughout and VFX that I'm not entirely sold on.

Is this the film that Train To Busan fans want? We'll find out soon enough but you can check out the trailer below for a taste now.

Do you feel this content is inappropriate or infringes upon your rights? Click here to report it, or see our DMCA policy.
PsychokinesisTrailerTrain To BusanYeon Sang-ho