Review: LET THE SUNSHINE IN, Loose and Light Romantic Comedy 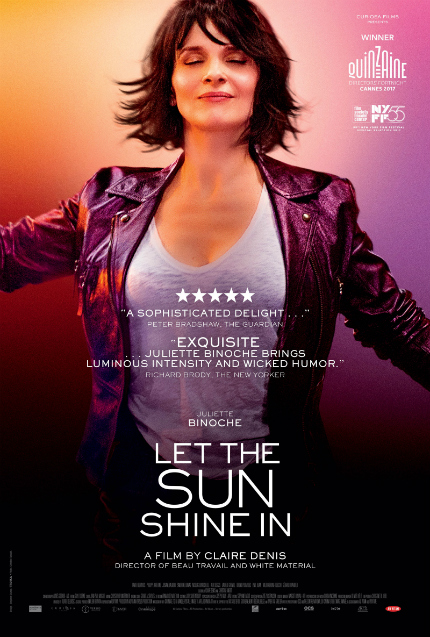 I think Claire Denis has been hanging out with Hong Sang-soo a little too much because I never expected her to do a wordy romantic comedy! And the result is delightful! It boasts the best rolling end credit of any movie ever.

Being in a relationship is a fickle business and there are no easy answers. We've all been there. As you grow older, the need for companionship grows. Loneliness is a terrible thing. In a rom-com setting, Juliette Binoche's Isabelle embodies a middle aged woman in the city dealing with these issues perfectly. With co-writer Christine Angot, Denis wrote a very funny script and created a very funny character that is unlike anything she created previously. The only comparable film she made would be Friday Night (2002). But that was a mood piece more than anything else, with little dialog.

Let the Sun Shine In concerns middle-aged divorcée painter Isabelle. The film starts with her having sex with her regular lover, Vincent (Xavier Beauvois), a portly, pompous banker with terrible manners. Some off-handed comment he says makes her cry. In fact, our disheveled heroine cries a lot, out of loneliness, in bed at night alone. Vincent is a married man and constantly says he won't ever leave his wife and family. He just want to bang her regularly is all.

Then there is a brooding stage actor (Nicolas Duvauchelle) Isabelle hits up on at a bar. They are about to work professionally together. But she is very anxious to know if he's interested in her as much as she is in him. He rambles on about his acting, his identity, whatever, while finishing what seems to be his 15th beer. After a hilarious and super awkward exchange in a car, Isabelle pretty much passive-aggressively makes him 'come up for coffee' and stay the night. The next day, she is super happy about what happened but he's not. He's full of regret.

Then there is François (Laurent Grévill), Isabelle's ex, with whom she has a 10-year-old daughter. She constantly regrets that she left him. He sometimes comes over and they screw. But they say some hurtful things to each other. It's not a good arrangement.

Always on the verge of tears, she confesses to her friend that she is deathly afraid that she'd pass the age to meet the love of her life, that she'd live the rest of her life alone and die alone. Easily swayed by other's opinions, whoever she meets, she asks for advice and second guesses herself if she's doing the right thing.

Frustrated with her current relationship arrangement, Isabelle takes a trip with her art circle acquaintances to the countryside, where they are invited to a little art festival. While taking a walk with the group, their pompousity and forced social niceties become too much for her and she blows up on everyone. Yet she finds herself in the arms of a soulful country bumpkin on the dance floor. Will that fling last?

Since it's shot by the great Agnes Godard, Let the Sun Shine In is filled with gorgeous close-ups. As the arresting images unfold with a jazzy soundtrack (by Stuart Staples of Tindersticks), you are safely in Denis territory. And the familiar faces appear: Alex Descas plays one of Isabelle's lovers to be (there is a lot of potential); Valeria Bruni Tedeschi briefly shows up too.

The biggest suprise, figuratively and literally, is the appearance of Gerard Depardieu as a fortune teller whose motives are suspect. His long, meandering advice and Isabelle hanging on his every words got hearty laughter from me.

After a couple of very dark films (White Material and Bastards), Denis is trying something different. Judging from two snoring critics on either side of me at the press screening, this new offering is not everyone's cup of tea. But I adore it. Let the Sun Shine In feels much looser and lighter than her other films but it still retains all of her visual language and style. With her announced English sci-fi project with Robert Pattison, I welcome this change. Someone please give this woman a best director prize already!

Do you feel this content is inappropriate or infringes upon your rights? Click here to report it, or see our DMCA policy.
BelgiumClaire DenisFranceJuliette BinochePhilippe KaterineXavier Beauvois

More about Let the Sun Shine In