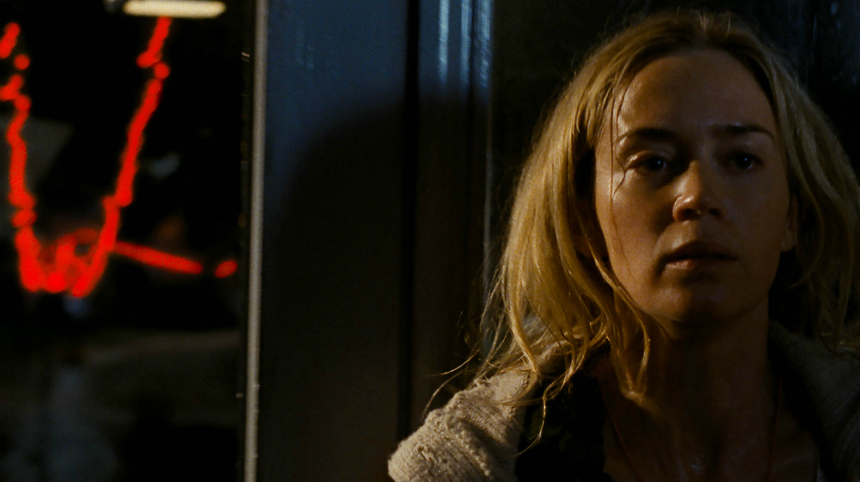 Imagine a world that has been silenced by mysterious creatures.

The deadly threat inherent in the premise is riveted home in an opening sequence that immediately sets the neat and efficient A Quiet Place apart from other neat and efficient thrillers. It explores the effects of an apocalyptic event upon a nuclear family, without wasting any time worrying about the world at large.

As the family knows it, the world is limited to their home and adjoining small farm. More than a year after the momentous, life-changing event, they have adjusted as best they can to their circumstances. Mysterious, predatory creatures have taken over, wiping out much of mankind, evidently. What the family knows by the time the film begins is that the creatures hunt by sound, just about any sound at all, and so they must remain very, very quiet, or else risk instant death.

The family consists of parents Lee (John Krasinski) and Evelyn (Emily Blunt), along with their young daughter Regan (Millicent Simmonds) and even younger son Marcus (Noah Jupe). Their names, though, are not important. (I don't even recall if their names are mentioned in the film itself, but this is how IMDb identifies them.) We never wonder who is who; with a minimum of dialogue, it's the family and the creatures and the sound of silence that easily fills the screen.

The screenplay is credited to Bryan Woods and Scott Beck, and John Krasinski; and beyond the excellent premise, the narrative is crafted to explain the family's circumstances and then allows the actors to demonstrate how their characters are holding up the weight of the world. Blunt, as one might expect, is fantastic at conveying not only a mother's deep and abiding love for her children, but also her rawhide resilience in the face of overwhelming danger. Krasinski is the putative hero of the piece, the brave father who is determined to protect his family against invasive enemies.

Krasinski shows himself to be a fine director of suspense sequences; as might be expected, he gives his screen (and real-life) partner Blunt ample opportunity to shine. Young Simmonds captures the essence of her character, and young Jupe does the best he can with a challenging role.

Cinematographer Charlotte Bruus Christensen does a marvelous job with the lighting, keeping the colors burnished even in dim conditions, which goes a long way toward establishing the atmosphere, which feels worn yet also, somehow, warm in the domestic settings. Film editor Christopher Tellefsen also does a superb job; Marco Beltrami provides the expected minor-key music.

Though the film eventually succumbs to third-act expectations, the buildup is marvelously compelling and inventive, to the point that it's easy to be invested in the characters and worry about their eventual fate. That it accomplishes all this in about 90 minutes of running time is another reason to recommend A Quiet Place.

Do you feel this content is inappropriate or infringes upon your rights? Click here to report it, or see our DMCA policy.
Emily BluntJohn KrasinskiMillicent SimmondsNoah Jupe

More about A Quiet Place