Notes on Streaming: A.I.C.O. INCARNATION Bursts Into Action Early and Often on Netflix 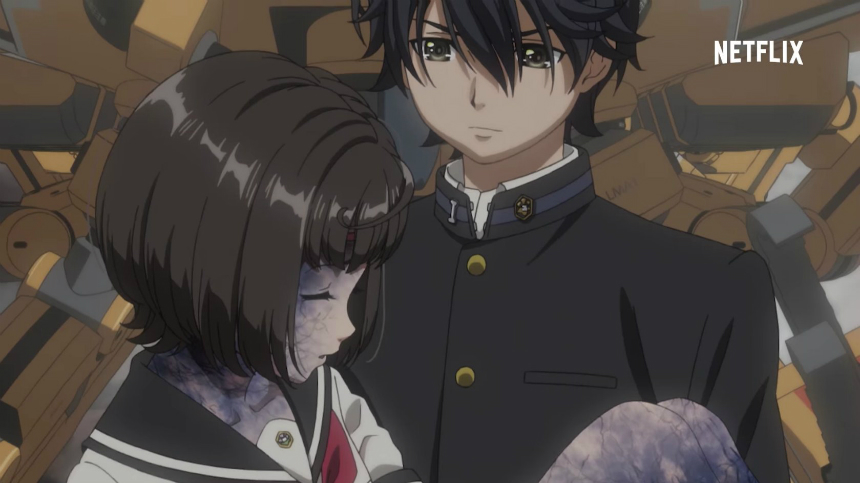 The animated series A.I.C.O.: Incarnation, which premiered on Netflix worldwide on March 9, 2018, is terrific.

Produced by Japanese studio Bones, directed by Murata Kazuya, and written by Nomura Yuuichi, the series is filled with nicely-choreographed action, while also taking time to develop the numerous characters to a point that their fates become meaningful. Featuring a mix of younger and older people, from students to scientists to soldiers to schemers and scoundrels, humanity is well-represented in a battle against what is, essentially, a blob.

Heroes swamp the screen, including those who might be described as mercenaries; everyone is doing the best they can. While there are a few nefarious types who seek their own goals, they are less villains than individuals representing groups with opposing agendas.

The series is structured very well for binge-viewing multiple episodes in one sitting. Each fleet-footed half-hour episode judiciously sways from action to exposition to character bits; just when it seems like you've had enough battling or talking or explaining, the pendulum swings back. The narrative is weighed out over the run of episodes, without any frustration that information is being held back for no apparent reason except that the season needs to run 12 episodes.

A.I.C.O.: Incarnation revolves around Aiko, who's been having strange dreams lately.

In long-term rehabilitation after an accident that killed her father, Tachibana Aiko (voiced by Shiraishi Haruka) is also still coming to terms with the loss of her mother and brother in a calamitous event that took place shortly thereafter. Referred to as "the Burst," it refers to the sudden appearance of a mysterious, murderous substance, referred to simply as "Matter," that ravaged a significant portion of the country in the year 2035.

The Matter looks like gelatin, oozing and growing in alarming and unexpected growth spurts that threaten all living things. In the two years since the Burst, the Japanese government has managed to limit its expansion, placing the area under quarantine behind a series of mammoth gates, but it requires military monitoring and warfare against the Matter.

Aiko attends school at the same medical facility where she is rehabilitating. On the last day of the school term, a student named Kanzaki Yuya (voiced by Kobayashi Yusuke) transfers. That's suspicious in itself, and strikes up great curiosity among the students, including Aiko. She invites him to accompany her when she visits her family home for the first time since the Burst.

While there, C.A.A.C. (Control Agency of Artificial Creatures) appear, for no apparent reason, and pursue her. Yuya helps her escape to an old part of town, and there great secrets are revealed to her that change her entire view of the world, and of herself.

And that's just the first episode (or two)!

I hesitate to get any further into the plot and where it goes, except to say that the basic outline is enlivened considerably by plot twists that always feel fair. The Matter reminds me of The Blob (1958); rather than originating from outer space, though, its origins are much closer to home.

Early on, I was growing anxious for Aiko to begin asserting herself more, to be less of a victim. In time, she grows and develops, yet upon reflection, and considering the age of the character, she's more nuanced (and ultimately more empathetic) than a simple kick-butt teen heroine might have been.

She is, after all, still quite young, and as the show reveals, there are a variety of conflicting emotions that are vying for her attention. It's never easy to grow up, especially when you find out you're not quite what you thought you were.

Notes on Streaming explores films and episodic shows that are available legally on streaming services.