Berlinale 2018 Review: THE INTERPRETER, Two Oldtimers in a Road Dramedy 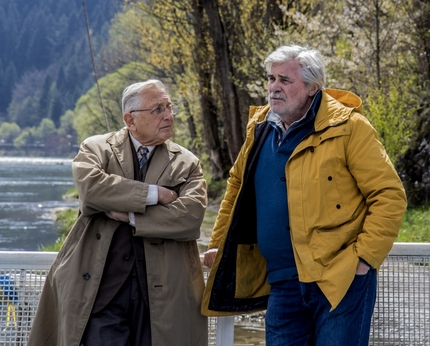 One of the most significant Slovak directors of the 90s era, Martin Šulík, returns on the big screen after 2011 social drama Gypsy tinged with his easy-to-recognize magic realism style. And it's a grandiose comeback. The Interpreter, Šulík's latest feature effort, stars in the leading roles Peter Simonischek of Toni Erdmann fame and Czech Oscar-winning director Jiří Menzel.

The current political climate, influencing and being influenced by a social upheaval in a certain demographic circles, is characterized by "turning brown". Documentarist started paying attention to the expanding phenomena sooner by virtue of the flexibility of their craft and raising red flags, while the topic seeped into fiction filmmaking. The Interpreter addresses the alarming situation in an indirect matter, although that does not reduces the importance.

Jiří Menzel as octogenarian Ali Ungár, a Jewish interpreter, emerges in front of a Viennese apartment, a gun in a pocket. Septuagenarian Georg Graubner with ruffled hair opens, Ungár asks after SS officer, Graubner says his dad died. Surviving son meets the son of a murderer responsible for the death of his parents. After a rough start, grumpy Ungár embarks on a road trip with hedonistic Graubner to retrace his father´s steps during his time in Slovakia, while Ungár hopes to find more about his parent. Both seek to understand more about their identity while the roadmovie stands on the dynamics of two contradictory personalities that were part of the same history that continues to rest on their shoulders.

Besides the topic of aging and looking over the shoulder, The Interpreter thematizes, front and center, currently a hot topic in academic circles: collective memory, forgetting and remembering. Seemingly trivial motifs proved to wield instrumental power over society while lax approach towards them lead to deceiving misinterpretation and manipulation.

Šulík naturally grasps the heavy baggage without the academic rigour within the framework of a universal story meandering between the themes of identity and understanding, and keeping humanistic contours despite the WWII monstrosities that are in no way avoided. After Holocaust dramas such as formally-inventive Son of Saul by Laszlo Nemes or Martti Helde´s poetically arresting depiction of Soviet terror in his debut feature In the Crosswind, Šulík chose the way of two oldtimers on a road trip, a basic set up that could have gone awry in a plethora of possibilities.

In particular, the use of comedy could easily backfire rendering everything trivial in the shadow of Holocaust. However, Šulík separates them by a surgical cut establishing two planes, a controlled character comedy and a memento of a dark period in history. It appears that as eye witness are dying, the recollection of the events seems to fade out, threatening to be expelled from the collective consciousness.

And the impact of the emptying historic events took already toll in relativizing Holocaust and equally absurd rise of fascism in the contemporary Central Europe. Besides, Simonischek character hides a rather melancholic nature under all the live-life-to-the-fullest hijinks notwhistanding a Toni Erdmannesque moment or two.

Šulík seems to almost switched into documentarist mode as he employs similar approaches in staging encounters with witnesses or survivors and in even special case, he even embeds a documentary footage to break through the veil of fiction film.

Towards the finale, The Interpreter loses any attempts to amuse in order to embrace the seriousness and objectivity of the events and their consequences sealing that purpose through an authentic re-counting by the last living survivor. The choice to feature that authentic footage doubles as a clear gesture of what the film´s message and intent is and regardless of repeated references to Holocaust. The bigger picture is warning against xenophobia and selective dehumanization packed in a comically-tragic road movie of two oldtimers reflecting on their life.