The 1999 political satire starring Matthew Broderick and Reese Witherspoon is as relevant as ever. 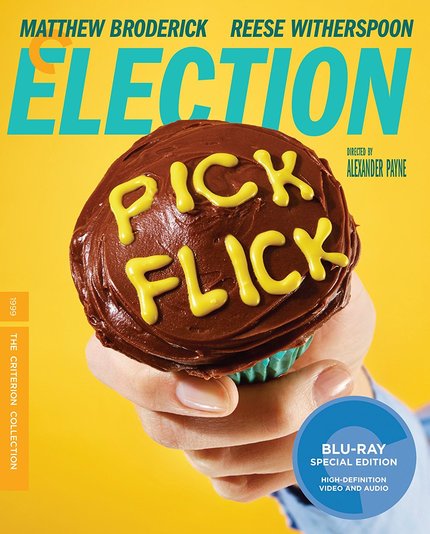 What is that irritating buzzing sound, anyway...?

Is it a bee? In this movie, they’ve been known to sting philandering high school teachers, right in the eye.

Is it the flickering fluorescent lighting in George Washington Carver High School? That’s the fictitious Omaha, Nebraska locale where most of Election takes place - its student body of unspeaking extras, for those keeping score of such things, the only indication of non-whiteness in the whole movie.

It’s tempting to wonder if the buzzing is the collective gripes of certain Criterion Collection devotees, upset to see “teen comedies” such as this and John Hughes’ The Breakfast Club infiltrate the brand. But that sound (misguided, for the record) is more of an entitled murmur.

It turns out that the irritating buzzing is, in fact, no less than a short in the wiring of the modern American political system, playing out in no-frills suburban Omaha, circa 1999. The fact that the sound is persistent enough to be heard all these years later is truly something.

Of all the great and/or noteworthy films of 1999 (still considered a banner year for cinema), MTV Films’ Election has won out as a surprise underdog. Of all the great and/or noteworthy films that Alexander Payne has made, this early effort has persevered in the face of a filmography that’s since gone pretty “prestige”. His subsequent films, About Schmidt, Sideways, The Descendants, Nebraska, and to a small degree, his current film, Downsizing, have proved to be valiant awards contenders with honest bite. Yet, none of them bite as sharply as Election.

There are so many things about Election that ring true in terms of filthy underbellies. Underbellies which loudly exist beneath quaint, workaday exteriors, be it the lives of conventional American school students, their teachers, or the broader scope of politics in general. The shocking wit exhibited throughout the film can be traced beyond the screenplay by Payne and frequent collaborator Jim Taylor to the written source novel by Tom Perrotta. Take, for example, the larkish name of co-lead character, the overly-ambitious, outwardly saccharine/phony Tracy Flick; the “l” and “i” in her last name threatening to run together at any moment to actually give a “fuck”.

Though the film was no cultural Earth-shaker at the time, (the box office still reeling from The Matrix and hotly awaiting The Phantom Menace) Reese Witherspoon’s full-on embodiment of the character landed her on the fast track to stardom, a destiny solidified only a few years later by her far different turn in Legally Blonde. Flick, though, may actually be her legacy character, an unforgettable presence that in some ways transcends the film itself. When Hilary Clinton reportedly says that she’s lost track of the number of times she’s been equated to the character, it’s telling of the mark Tracy Flick has truly made.

Matthew Broderick plays her foil, the lily-livered Jim McAllister, the nice guy teacher also charged with managing the student election that dominates, in fact detonates, the plot. Internally repulsed by Flick following the termination of his friend and her illicit lover Dave Novotny (Mark Harelik), McAllister takes it upon himself to derail in her unopposed run for School President. Mcallister’s interjection officially makes it one too many buttholes near the beehive, stinking up a process that was already sticky if also at a glance, kind of sweet. (Who doesn’t have at least a small soft spot for the earnest flair of handpainted Vote-4-so-and-so posters cluttering school hallways?)

As for Novotny, the teacher who cheated on his wife in the name of his delusional looove for Tracy, he finds himself divorced, disgraced and forgotten - freeing his jilted wife (Delaney Driscoll) for an affair with McAllister. Teenagers may do it in the backseat, but for these adults, operating like the worst teenagers, ethics take a backseat to their tract house bedrooms and motel rooms. As long as their spouses don’t know.

Upon further investigation, we find that the source of the short is, in nature... human. Which begs the question, just how tall are Matthew Broderick and Reese Witherspoon, anyway...?

For a December Blu-ray release that many have greeted with a shrug, Election is an awfully good and awfully pertinent Little Movie That Could. To say it’s become more relevant in recent years than it was in its own time would be to echo the chorus that, on the flip side, respects this film as a brutally honest allegory that won’t stop allegory-ing. One supposes that the support for Election is as divisive as most any U.S. Presidential election is these days.

But, it’s the strength and, dare I say, flawed human nature of these archly drawn characters that has made Election a perennial.

A fine early work of a film artist that matters, Election is worthy of its Criterion seal. Bonus content is light yet impressive, not unlike the reputation of the film itself. Alexander Payne’s original DVD commentary from 1999 is included, as is Payne’s UCLA student film The Passion of Martin, which he introduces.

Actor Reese Witherspoon is featured in a newly recorded short video interview, making up for her absence in the best piece, Trulnside: “Election”, an otherwise impressively inclusive extended documentary produced earlier in 2016. Amid the documentary’s well assembled vintage behind the scenes footage and whatnot, it’s particularly interesting to catch up with some of the key cast who’ve fallen off the radar, particularly Jessica Campbell, who played the angry lesbian rabble-rouser, and Chris Kline, now well beyond his teen-idol blip of fame.

Finally, there’s a Omaha local-news piece on the production of the film, a trailer, and a printed essay by critic Dana Stevens.

In the final tally, it’s a landslide: Election on Blu-ray from Criterion is, as a student-made hallway poster may tell us, something worth buzzing about.

Do you feel this content is inappropriate or infringes upon your rights? Click here to report it, or see our DMCA policy.
Alexander Paynecomedydark comedyhigh schoolMatthew BroderickpoliticsReese Witherspoon