Warsaw 2017 Review: SO HELP ME GOD, a Wild True/False Search for Justice 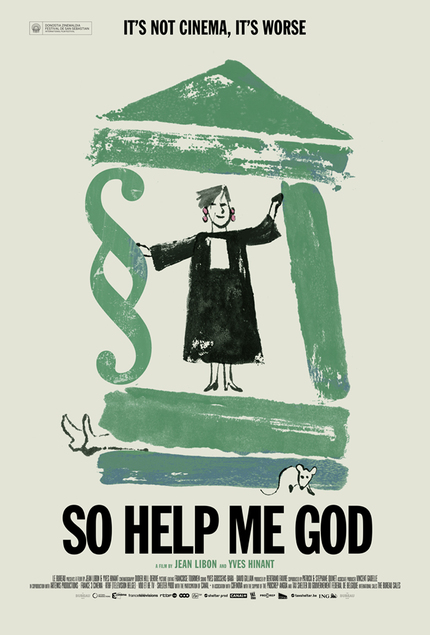 Belgian judge Anne Gruwez sits behind a computer in her office. There she meets with eccentric characters, listening to ridiculous excuses, anecdotes, practices and in one macabre instance something very chilling. The fly-on-the-wall camera inconspicuously observes the judge and those she interrogates while never going far for a sarcastic one-liner. “It's nice when satisfied customers come back” she chirps to a man she previously judged appears on her threshold again.

Gruwez is a no non-sense lady. She knows how to deal with ex- and future convicts and minor offenders. And no single encounter is the same. They are of all different tones and appear to be too good to be true, actual, authentic and non-scripted confrontations.

Jean Libon and Yves Hinant directed So Help Me God, a documentary following Gruwez as she carries out her daily tasks during her reopening of a cold case of a murder of two prostitutes.

Both gentlemen behind the film are alumni of a groundbreaking satirical Belgian docu-reality television show called Strip-Tease, inspired by 1980s Italian sketch-style social comedies. This being their first feature doc, So Help Me God could then be dubbed a feature-length episode of Strip-Tease.

Gruwez´s working process is scrutinized in the office, in the field, at one point during the extremely candid process of exhumation, and during free time at her home with her white pet rat. She seems to be at ease around the all-recording eye, dolling out political incorrectness and a surprisingly human approach given the grave circumstances of the case at hand, one which brings to mind the infamous Son of Sam case. Despite the hunt for a possible culprit, the most crucial question until the final roll of film: is this actually all true and genuine?

Libon and Hinant thread the finest line between documentary and mockumentary, relishing this grey zone. The film appears, on one hand, way too polished for a documentary. Rhe film was in the making for over 3 years, and the occasional bouts of warts-and-all moments must have required a legion of lawyers to hermetically seal the film and its creators before any possible lawsuit and to get all the waivers and permits properly secured for the film to see the light of a day.

On the other hand, for a mockumentary, the aura of genuineness appears to be too natural to be fabricated. There are directors credited on the film yet no scriptwriter nor dramaturge is presented... though the filmmakers acknowledge “We script the real by tracking daily life, flushing out characters and anecdotes in every social, cultural and professional situation”. With an appropriate tongue-in-cheek and mystification, the directors´ statement reads: “Is it documentary or is it fiction? Is it fine or is it swine? “So Help Me God” isn´t cinema … It´s worse!”

Chad Gracia delivered an equally bewildering experience in The Russian Woodpecker (read the review), however the whole film was framed as adapting the point-of-perspective of the anxious protagonist believing in a conspiracy. So Help Me God does not have a person with a distorted perception of reality. The approach to how Libon and Hinant handle the film does not seem like an entire construct yet the predicament cannot be shed away.

So Help Me God has to be accepted as a formalistic zeitgeist, the perfect amalgamate of documentary and fiction, the lasting dilemma being part of the package reflecting the reality as absurd, comic, macabre and with a tiny spark of hope, all the ingredients of life.

And while the story arch emulates CSI: Real Life, the actual making of a “Strip-Tease” product adheres to a set of orthodox Dogme 95-like rules, the in-house modus operandi. No prior writing, no commentary, no interviews, no on-screen text over the image, no additional music, written agreement from all people filmed, no blurred faces, no children, a short poem at the end and “Combo Belge” over the end credits. The question of veracity of the footage is swiftly toppled by a new riddle. Is So Help Me God´s distinctive albeit highly watchable outcome achieved thanks to the strict limitations or in spite of them?

Do you feel this content is inappropriate or infringes upon your rights? Click here to report it, or see our DMCA policy.
Ni jugeni soumiseSo Help Me GodWarsaw 2017