Nishimura Yoshihiro's newest and most outrageous splattergore flick is raucous yet monotonous. 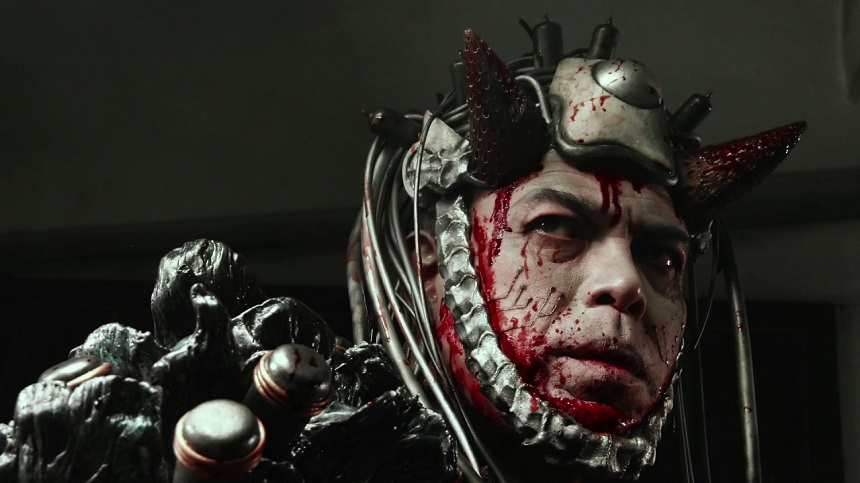 Twelve years ago, a small film called Meatball Machine by directors Yamaguchi Yudai and Yamamoto Yun'ichi made a bloody splash in the festival circuit. In it, you could see two star-crossed loners falling in love with each other, only for both to be infeested by alien parasites who use their human hosts as walking weapon platforms, the better to battle each other with. Eyes were gouged, limbs replaced with guns and knives, and gallons of blood geysered out of orifices old and new.

Together with Iguchi Noboru's The Machine Girl and Nishimura Yoshihiro's Tokyo Gore Police (both released a couple of years later), it started a veritable wave of Japanese "splattergore" films, in which all rules with regards to taste, story or biological realism were gleefully disregarded. 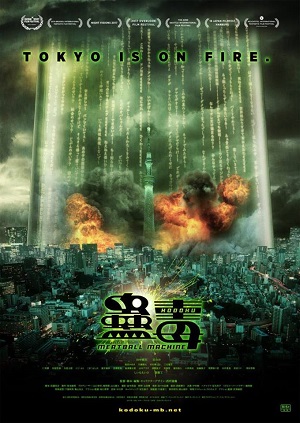 In Meatball Machine Kodoku, we follow Yuji, a fifty-year-old debt collector trying desperately to reach his targets, but who is too gentle to be good at it. His day soon gets worse though: first he is diagnosed with terminal cancer, then his money gets stolen, and finally his part of Tokyo is cordoned off by aliens, who infest the inhabitants and mutate them into battle-crazy meat-grinders for sport.

Yuji also gets "boarded" by such an alien, but halfway through his transformation the parasite gets killed by the cancer, leaving Yuji as the only superpowered human in Tokyo who still has full control over his own body. Enraged, Yuji starts to battle the invaders and tries to protect the girl he secretly has a crush on.

Having seen the original Meatball Machine (and the Nishimura short it was based on), I thought I'd be prepared for how crazy this film would be, but I was not. In Meatball Machine Kodoku we don't just get a lot of blood, we get Nishimura Yoshihiro's almost patentable bizarreness on top. His Z is for Zetsumetsu (Extinction) segment of The ABCs of Death is actually a better indication. We get nudity, people yelling, fire, shaky-cam, metal music, giant penises... once Meatball Machine Kodoku gets going, it's actually quite exhausting.

I saw this at night at the Camera Japan Festival in Rotterdam, with friends and beer, and the near-endless barrage of images and music managed to make me quite drowsy, and had me nodding a bit even at the loudest moments. Just as the people of Tokyo are put in a blender, so do the cacophony of images and sounds, with one huge bloody mess emerging. Bits and bobs of brilliance float up: a nude girl riding a mutant cart-human like a steampunk Lady Godiva, using her underwear as makeshift gear to steer the creature. The barrier around Tokyo showing the emotions of anyone touching it. A group of alien witches arbitrating the battle, all played by Shiina Eihi of Audition fame...

But all in all, I wonder if this genre hasn't reached its bloody end by now.