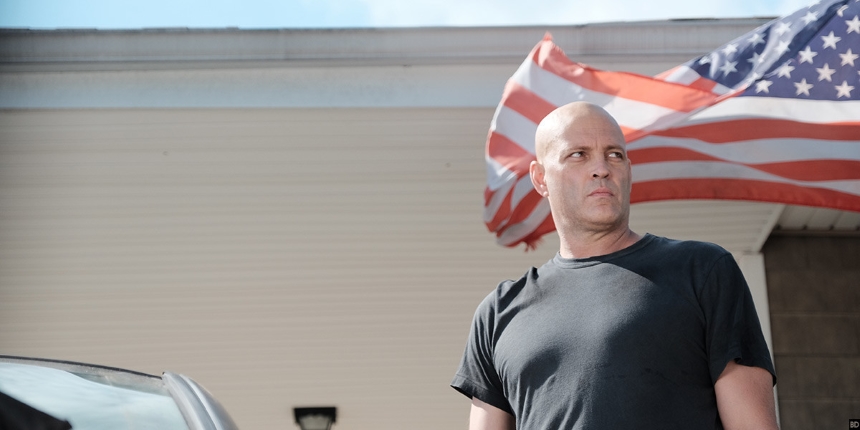 Sometimes, you have to smash things to bits before life can get better. But then life only gets better for a while before it gets much, much worse. More smashing is required, some resolution gained. Then, well, hmmm, that seems to be the thesis of S. Craig Zahler's gritty, deliberate, and ultimately, gruesome tale of masculinity descending deeper and deeper into hell; prisons inside of prisons.

Brawl In Cellblock 99 (hereafter Brawl) with a remarkable mano-a-auto bit of demolition, in which beefy and tattoed Vince Vaughn, playing ex-boxer (and addict) Bradley Thomas, takes out his rage on his wife's car after he loses his job and finds out she is having an affair. This is not your ordinary break a window and throw away the distributor caps kind of tantrum, but rather a meticulous focus of rage, all bare-knuckling head-lamps, yanking chasis wires and tossing body panels. It's a promise of what the movie will ultimately become.

But first, Zahler wants to offer a contract to his audience that this is not your normal, run-of-the-mill hard-luck incarceration film, and he is willing to work hard at distinguishing his take on the sub-genre. Instead of Bradley leaving his wife, getting drunk, and in trouble - the usual motivations of the lonely direct-to-DVD antihero - before ending up in a nasty jail scenario. Bradley uses his violent outburst to rebuild communication and trust with his spouse, and find a way forward ("Do you abide?") You know, American lives and second acts and all that.

Then Udo Kier shows up. All bets (and kid-gloves) are off.

Zahler's penchant for combining fussy-verité dialogue (as if Quentin Tarantino took to writing Ken Loach movies) and excessive, steely-eyed violence, things are already feeling, at his second feature, like an auteur stance. His first picture, the creature-feature western Bone Tomahawk, literally (and undeniably uncomfortably) recast the frontier 'savages' as savages.

For all its split-open abdomens and bloody hatchetry, it was leavened by a down-to-earth performance from Kurt Russell, and a sweet melancholy one - awards worthy if they gave out Oscars to cannibalism grindhouse pictures - from Richard Jenkins. With Brawl, the build-up is even more extended, even more piquant, and even more deadpan amusing. Likewise, the violence is, somehow, more bone crunching. My only gripe here is that, like Bone Tomahawk, the lighting and cinematography feel curiously flat and under-value, considering the rest is prime-cut exploitation porterhouse.

Clocking in at a whopping 132 minutes, Zahler is offering a prestige-sleaze experience, where savoury, but minor details - ones that that would be excised from any normal take on the genre - are amplified and underscored.

There is a Michael Mann inspired drug deal that is extended beyond any normal requirement, but, richly compelling to make it a desirable indulgence, the journey is the thing with Zahler, not the destination. Wonderful character actor Fred Melamed (A Serious Man, In A World) delights in the bureaucracy and power of his single-scene as a guard who inventories belongings, when checking in new inmates. His OCD-tyrant of his own kingdom attitude has one prisoner lament, "What is this, the DMV?" And Zahler makes us wait in that line. It is hilarious.

Various other prison guards and inmates get both conventional and unconventional scenes as Bradley works his way down the prison system, one human-transaction at time. Like a gutter version of Dante's Divine Comedy, Bradley goes from the sweet deal medium security outfit, 'The Fridge' to the off-the-grid Redleaf Pen, looking like a converted Boston meat packing abattoir, to the eponymous cell blocks below.

It is here that Don Johnson shows up as a cigar smoking, black-gloved warden that hits every Alcatraz inspired cliche, but somehow feels fresh after our slow wind through better institutions to arrive at his torture dungeon of a correction institute.A chewy bit of wordsmithing brings out the best in Johnson, doing what would otherwise be a rote part. Ditto Udo Kier who, frankly, is not in the film enough for my tastes.

But it is Vaughn's crisp dialogue commitment, precision martial arts moves (executed in long don’t-look-away takes) and Terminator level endurance for suffering, that will force many to look at the actor with fresh eyes. This was teased at in Season 2 of True Detective, but everyone stopped watching. Here, at one point he causally informs a guard, "I think you know by now that I can get mean." We do. We want to see what he will do next.
Tread carefully with this one; it is dangerously crafted.
Tweet Post Submit

Do you feel this content is inappropriate or infringes upon your rights? Click here to report it, or see our DMCA policy.
Bone BreakingDon JohnsonExploitationFred MelamedJennifer CarpenterPrisonS. Craig ZahlerUdo KierVince Vaughn

More about Brawl in Cell Block 99