Fantastic Fest 2017 Review: TIGERS ARE NOT AFRAID, Horror and Imagination on the Streets of Mexico 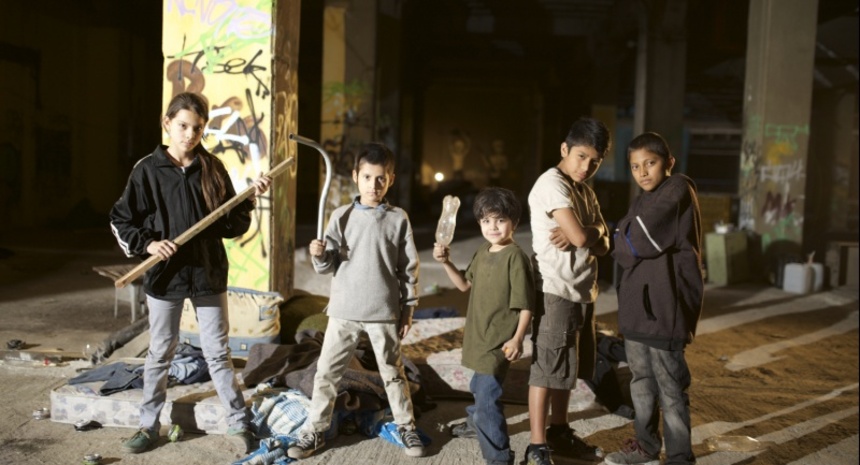 Thousands of people have been murdered or gone missing in the ongoing violent drug war in Mexico. One of the often unacknowledged side effects is the now-orphaned children, many of whom end up on the streets. In her third feature, writer/director Issa López takes on the story of five such children, literally and metaphorically caught in the crossfire. Magical, terrifying, violent, filled with both cruetly and love, Tigers Are Not Afraid takes a child's-eye view of the daily struggle to survive.

Estrella (Paola Lara) and her mother live in a nothern border town violence in the streets is endemic and where children at school sometimes have to lie on the floor to avoid gunfire that might come in from the street. On one such day, after Estrella's teacher gives the girl pieces of chalk and tells her they are 'three wishes', Estrella's mother doesn't come home. Naturally, she makes her first wish for her mother to return; but as with such wishes, what comes is not exactly what Estrella wanted. Followed by a strange line of blood and voices of the dead calling to her, Estrella escapes to the streets.

She meets with with a gang of children led by Shine (Juan Ramón López), who tell her that her mother was likely kidnapped and killed by the Huacas, a local drug gang. The boys certainly don't want her there; girls bring bad luck, they say, and this seems to be confirmed when the youngest of them is also kidnapped. But Estrella saves them, and even lets them believed (however innocently) that she killed one of the gang members.

Like another Latin film at the festival, Good Manners, Tigers Are Not Afraid's realism is of the magic variety; though in this case, told from a child's perspective, a children's story that includes monsters, blood, drugs, gangs, and vicious murder. Like Stranger Things and Pan's Labyrinth, López injects a girl into a kind of boys' own adventure, a girl who is the centre of the magic. But like her counterparts, Estrella must face up to the reality side of the situation, even as she desperately wants to cling to childhood.

It's not easy to direct children, but López's direction and the children's performances are not only assured, they are outstanding. The imagination of childhood comes into play, with graffiti drawings coming to life; but into this imagination inevitably seeps the horrors of the daily reality the children face (tigers can still eat you; the ghost following you might be that of your mother, but it is still terrifying).

The heart and strength of the film come from Estrella, who grows up far too quickly than she would like, and with an understable fear, but she knows she must face it. Her courage rubs off on her comrades, whose bravado is sinking as they find themselves caught up in  the violence: either to fight it or become part of it. López strikes the perfect balance between the fantastic and the real, finding their connections without too much indulgence in one or the other.

Do you feel this content is inappropriate or infringes upon your rights? Click here to report it, or see our DMCA policy.
Fantastic Fest 2017Issa LópezJuan Ramón LópezPaola LaraTigers Are Not Afraid