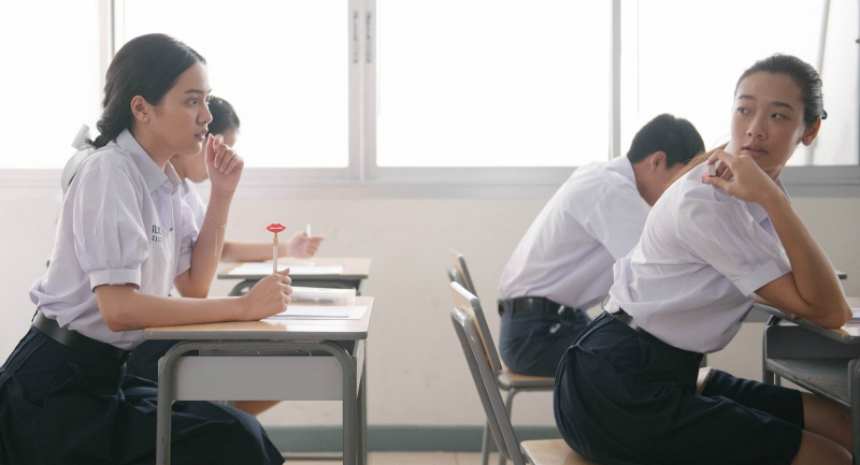 At some point, you have to ask yourself: Am I doing this for my friend? Or am I doing it for myself?

In Bad Genius, teenage Lynn (Chutimon Chuengcharoensukying) is faced with those questions. She's a top student in Thailand, so bright and promising that she's offered a scholarship if she attends an elite school that's a bit further away.

Her father Vit (Thaneth Warakulnukroh), a schoolteacher and single parent since his divorce, is eager to see her succeed, and the idea of a scholarship is far beyond what he could have imagined for his beloved daughter. He dreams that she will qualify to attend a top-flight university somewhere overseas, and is willing to sacrifice anything to see that happen.

Lynn, for her part, is preternaturally gifted in mathematics, able to calculate numbers as though it's second nature to her. Her brilliance (and lower middle class existence) sets her apart from her new classmates and also creates a further distance. The school is very expensive and draws children from wealthy families; Lynn has little in common with them and little desire to make friends. She's entirely focused on earning the best grades possible and then getting out.

Grace (Eisaya Hosuwan), though, is another story. She's a warm, friendly girl who is well aware of her intellectual limitations, which may be why she's drawn to acting. As the school year begins, she strikes up an easy friendship with Lynn that quickly becomes close. One day, while bemoaning her own limited intelligence, she convinces Lynn to become her tutor, even calling her "Mentor Lynn," a title that Lynn finds embarrassing, yet nonetheless flattering.

Lynn's kindly assistance takes a dramatic turn during their midterm exams, when she decides to help Grace during the test itself. This is where director Nattawut Poonpiriya's kinetic visual style really kicks in. Through a combination of unexpected camera shots and extremely tight editing, Poonpiriya injects the exam scene with a musical style of storytelling; it sings and dances and shimmies to an energetic rhythm that is utterly charming and impossible to resist.

After the test, Lynn accepts Grace's invitation to spend the evening with her and her boyfriend Pat (Teeradon Supapunpinyo), which is when he introduces an idea that is startling to Lynn: help us cheat and we'll pay you big money.

She quickly succumbs to the financial temptation, however, a decision made easier by the knowledge that her school's self-righteous headmistress (Sarinrat Thomas) exacts additional fees from her father for the privilege of attendance. Lynn thinks of it as blackmail and uses it to help justify her actions to herself.

Lynn comes up with a plan that is incredibly complicated to avoid detection. Frankly, I couldn't follow it -- clearly, I'm not as smart as the supposedly 'limited' Grace, who picks up on the plan right away -- but it involves piano lessons and making sure everyone involved can see her fingers and thus copy her answers in class. And, yes, the cheating quickly spreads beyond Grace and Pat, and Lynn's illicit income begins to spread exponentially.

Standing ready to spoil everything is Bank (Chanon Santinatornkul), a fellow student who rivals Lynn in intellectual capacity and whose family is even more impoverished. Like Lynn, his story doesn't follow the narrative lines that might be expected, which makes it all the more surprising and piquant.

Throughout all the melodramatic twists and turns and tests, director Poonpiriya turns Bad Genius into one of the better thrillers in recent memory. Because it first establishes its four primary characters and allows their personal storylines to predominate, the conflicting emotions surge forward. As a result, it very much calls for a personal reaction to the material and to the actions of the characters.

In my view, the whole idea of judging people academically by test scores is bogus, a false indicator that can derail dreams and light burgeoning careers on fire. No wonder even the best students are tempted to cheat. Yet even if one is outraged by the cheating, it's impossible not to feel empathy for the characters, who are driven by desperation and peer pressure to compromise their personal motives for the sake of some kind of better future.

Bad Genius captures all those conflicting emotions brilliantly, and is rather dazzling in its telling. The original-language title, Chalard Games Gong, "actually means cunning or cheating in a smart way," according to The Nation, and it must be acknowledged that the film easily lives up to its title, while delivering the goods from a cinematic standpoint in a poignant, affecting manner.

Do you feel this content is inappropriate or infringes upon your rights? Click here to report it, or see our DMCA policy.
Chutimon ChuengcharoensukyingFantastic Fest 2017Nattawut PoonpiriyaThailand