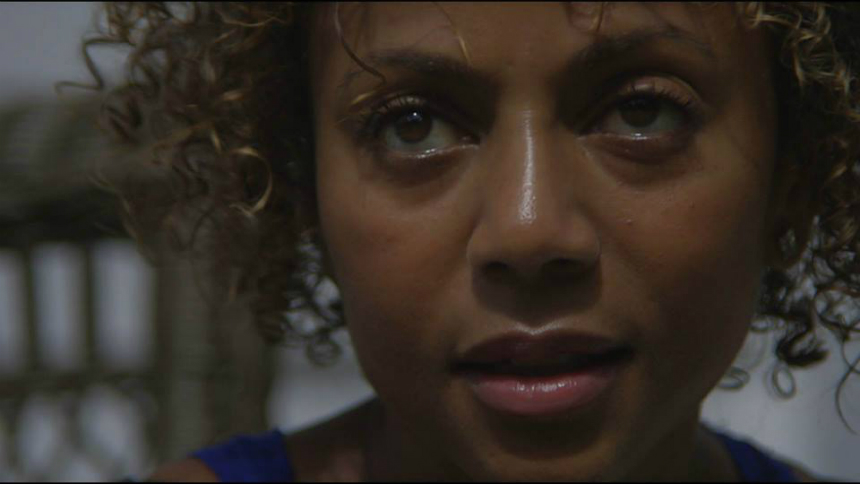 Suffocating in its intimacy, Theodore Collatos' Tormenting the Hen revolves around two women who have reached a turning point in their relationship, whether they realize it or not.

Claire (Dameka Hayes) is an African-American playwright who travels to the Berkshires in Massachusetts to complete rehearsals for her latest stage drama, which is about to debut. She is accompanied by her fiancee Monica (Carolina Monnerat), a Brazilian environmental engineer who is evidently anticipating a bit of a vacation. Claire and Monica have been living together in New York City for some years and, from outward appearances, they are a happy, loving couple.

The morning after they arrive, they have a minor disagreement that reflects their strong, independent-minded personalities. Claire then heads out to work on her play, while Monica is left to relax at the guest house where they are staying. Claire's play features two actors, Joel (Brian Harlan Brooks) and Adam (Dave Malinsky) in vociferous disagreement. They are a prickly pair, and it quickly feels like Claire is trying to harness a building storm of anger. Or is that the play itself?

Monica's relaxing day is interrupted when a neighbor returns home from a camping trip and revs up his riding lawn mower. He's revealed to be Mutty (Matthew Shaw), and over time we learn that his parents own the property; they are away in Florida and rented the guest house (or made it available) to Claire and Monica, without telling them about Mutty.

Then again, Mutty's exact circumstances are unclear. His behavior is unusual; he's a big fellow, and physically imposing because of it. His personality is gentle and meek, yet insistent. He appears to be self-sufficient, able to feed and care for himself, yet he also makes statements that are, at the least, rude and insensitive. 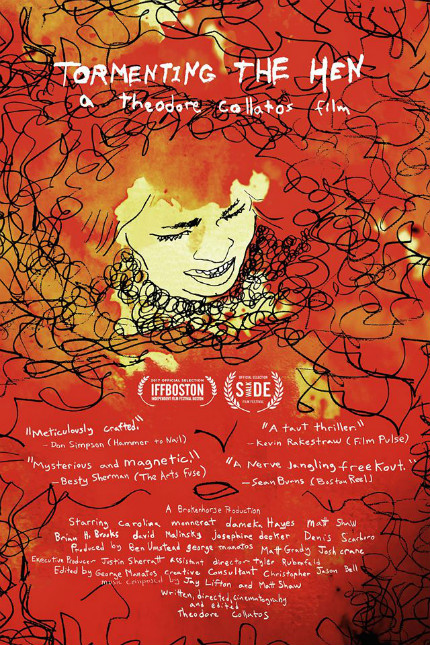 In other words, he's not an easy person to get to know, especially since he has appeared out of nowhere. Initially, Monica is unnerved by him -- it's supposed to be a vacation for her, and she didn't expect this sort of company -- and then gradually the friction between them builds.

Claire, too, is dealing with increasing friction generated by her actors. The rehearsals become increasingly disagreeable as the actors rebel against the text and their director, even though, off the stage, the trio get along fine, comfortable and relaxed when the pressure to perform is off.

At home, the relationship between Claire and Monica reaps the consequences. Monica is more unhappy than Claire. She's spending days in the country, her only company a disagreeable stranger. That leads to more contention, more drunkenness, more regrets. Monica begins to dream very strange dreams, involving a hen -- the guest house was formerly a hen house -- and ... stuff.

Theodore Collatos, who wrote, directed, photographed and edited (the latter with George Manatos), favors extremely tight closeups during key scenes, which makes them uncomfortable and downright suffocating in their intimacy. There's no escaping the drama, which approximates the emotional intensity the characters are no doubt experiencing.

Certain details are left vague, which is at times frustrating as far as understanding the characters fully, yet it also approximates the way that people who know each talk in private conversation. Tormenting the Hen is not a plot-driven film; it follows two people in in a long-term relationship and wonders whether love can truly conquer all, raising more questions than it answers in a thoughtful, artful, mesmerizing manner.

The film will screen at the Sidewalk Film Festival in Birmingham, Alabama, on Saturday, August 26.

Full disclosure: Ben Umstead served as a producer on the film. He is this site's U.S. Editor, but was not involved in the assigning, writing or editing of this review.

Film Clip // Tormenting The Hen from Theodore Collatos on Vimeo.

Do you feel this content is inappropriate or infringes upon your rights? Click here to report it, or see our DMCA policy.
Carolina MonneratDameka HayesSidewalk 2017Sidewalk Film FestivalTheodore Collatos

More about Tormenting the Hen