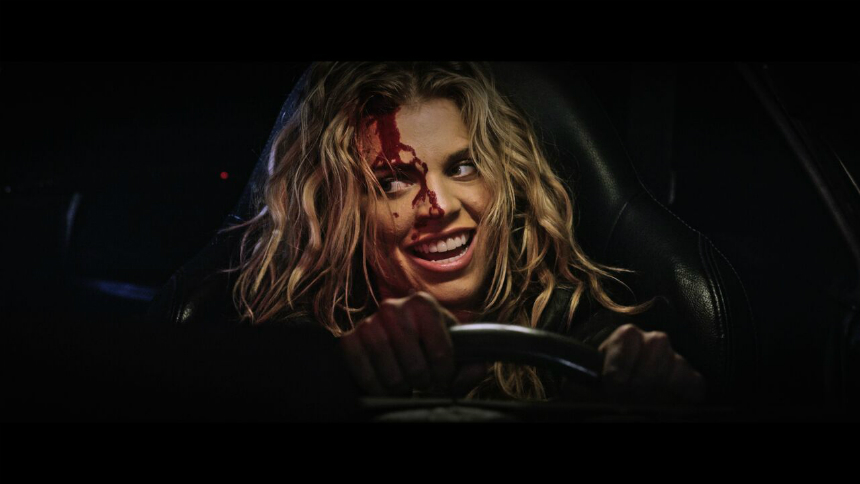 The story revolves around a white trash heist of $68,000 initiated by Chip's emasculating, maniacal girlfriend, Liza (AnnaLynne McCord), who uses her feminine wiles to induce her man into becoming an accessory to all manner of heinous crimes in the name of financial freedom. Chip pretty quickly realizes that his girlfriend is far more out of control than he knew after watching her trade sex for rent with their unpleasant landlord. All the while she assures him that it's for the best, simultaneously digging him deeper and deeper into her horrendously twisted plans.

Eventually Chip draws the line when he discovers that Liza's predilections for mania and abnormal behavior run in the family after an unsettling collision with her dopey oaf of a brother Dwayne (Sam Eidson), who has some pretty twisted hobbies of his own. Chip decides he's had enough and goes on the run with a hostage their pair had kidnapped when the simple heist took a predictably sideways turn. Liza gives chase, and the rest of the film follows Chip as he encounters one asshole after another on his way to freedom.

On the surface, 68 Kill has enough going for it to find great success as a modern indie crime exploitation film. Sex, drugs, and violence are in no short supply here, but I do have a really major issue with the film that became evident within the first few minutes. 68 Kill hates women. It really, really hates women.

I've seen enough exploitation films over the years to understand how these things are constructed. There are plenty of films that utilize women as villains in interesting and compelling ways. 68 Kill is not that film. AnnaLynne McCord's portrayal of Liza as a harpy of a woman whose sole purpose on earth is to manipulate the men around her, whether it be Chip, her landlord, or her poor simpleton brother, is incredibly grating and one note. 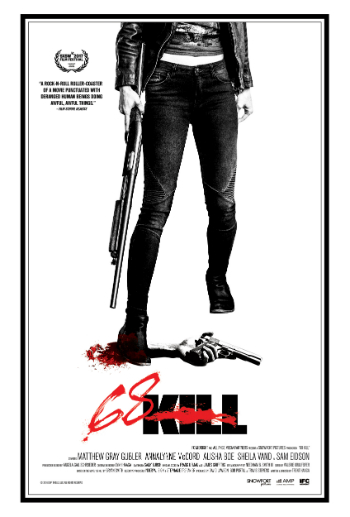 Liza is evil, which would be fine, if it weren't for the fact that every single character trait written to outline her evilness is directly attributable to negative stereotypes of manipulative women.

There is nothing about the Liza character that defines her outside of that a disregard for the men around her. She is the very embodiment of the kind of woman that men's rights activists insist are everywhere, and that's really hard to watch.

She is far from the only example of horrfically stereotypical shrews in the film. In fact, every single secondary antagonist in the film is a similarly vile example of toxic femininity (if there is such a thing), and every other man in the film is a victim, even the ones trying to kill Chip.

It's a strange and upsetting dynamic to behold because at first it seems sort of empowering for women to play those parts usually reserved for men, however, when it becomes clear that all of the women in charge share the exact same traits that are entirely based on negative gender stereotypes, it feels a lot less evolved.

Chip's flight to freedom is an escape from the shackles of vicious womanhood in a very literal way. What could have been an interesting take on the revenge genre turns into a blood and guts femicide as he exacts his vengeance on these women who have taken everything from him, including his manhood as he is forced to wear women's clothing for half of the film in an attempt by the filmmakers to further victimize him by turning him into the very thing that is attacking him.

I wanted to like this film. I've seen similar films and enjoyed them quite a bit, so it isn't that I don't understand the genre. I understand it quite well, in fact. What I also understand is the fact that if the villains were men and the hero a woman, I can almost guarantee that the men would've had more substance even as henchmen than the manipulative witches in 68 Kill. It's lazy, hateful filmmaking and I can't say that I enjoyed it, try as I might. Better luck next time.

Review originally published during SXSW Film Festival in March 2017. The film will be released by IFC Midnight on Friday, August 4, on VOD, On Demand and at the IFC Center in NYC and the Arena Cinelounge Sunset in Hollywood.

Do you feel this content is inappropriate or infringes upon your rights? Click here to report it, or see our DMCA policy.
AnnaLynne McCordMatthew Gray GublerTrent HaagaBryan SmithAlisha BoeSheila VandComedyCrimeRomance