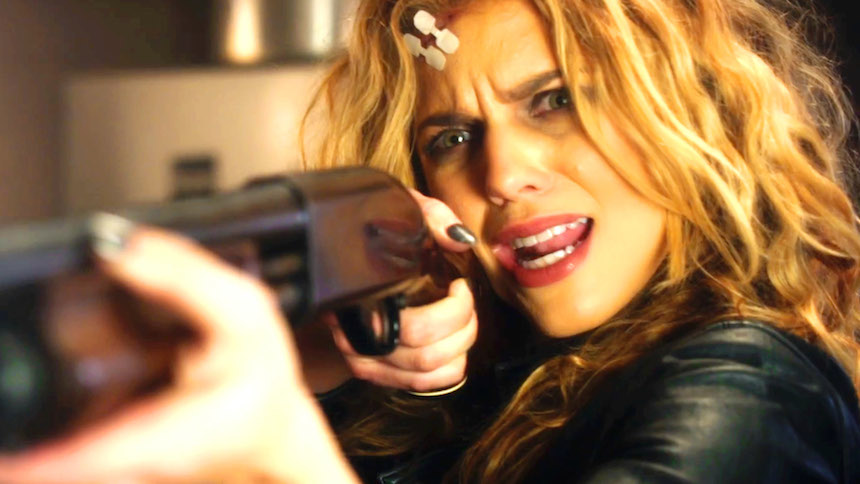 [Pictured above is AnnaLynne McCord as Liza.]

Trent Haaga has a new film out produced by Snowfort Pictures -- 68 Kill -- but he’s been in the gore and exploitation biz for a while now, with his earliest professional beginnings at Troma. Creative people often have a myriad of interests, and Haaga is no exception.

He’s written several screenplays, most notably for Cheap Thrills (directed by Evan Katz, and also produced by Snowfort) and Deadgirl, but moonlights as an actor, too. Similarly, the cheerful Matthew Gubler is a popular actor, most known for his role on Criminal Minds, and he’s directed some episodes and a few shorts, as well.

So, what happens when you mix the talents of Haaga, Gubler, Snowfort, AnnaLynne McCord, Alicia Boe, Shelia Vand, AND an adaptation (screenplay by Haaga) of a crazy novel by Bryan Smith? 68 Kill -- a kickass, nonstop explosion of Southern Gothic gone awry. I was able to chat with Haaga and Gubler at Fantasia 2017, who were at the festival for their Canadian premiere. Check out a bit of the madness they’ve created in the trailer for the film -- now out on VOD --below.

Tell us how 68 KILL came to be adapted from the book.

Trent Haaga: I was a big fan of Bryan Smith; he’d published four novels under the Leisure imprint. I’m a voracious reader. When Leisure shut down, their authors got the rights back to their work. They started self-publishing on Kindle and dusting stuff off. Smith was hyper-prolific, and I liked his horror stuff a lot, but he also published three novellas that were pulp, which was really my bag. I came up in the horror world, but I really like pulp thrillers. I read  68 Kill, and I thought Smith was really great, but no one knew about him, so I thought about getting the word out and how the book would be an amazing movie.

When you pick an author like that, it’s real easy to find and reach out to them. He doesn’t have a manager or agent, and neither do I. We were able to just exchange emails and do a handshake kind of deal. Being an independent artist, I scraped up some good faith money and we created a simple option deal.

Then when Snowfort got involved, I’m sure they had some paperwork, but I had nothing to do with that. Bryan was happy, he had some money to pay some bills. A lot of these authors don’t believe that a GOOD film adaptation is ever going to happen. A lot of indie filmmakers want options for free for backyard productions, so that’s what the authors expect. (Gubler laughs in the background.)

Is that where you filmed it?

TH: No, Indiana was where my parents are, where I grew up. But I did some location scouting in Ohio, because we had a producer there. Eventually, because of the tax incentives, a deeper cast pool, and more able crew, we ended up going to Louisiana and shooting there.

But every step of the way, I’d write to Bryan, like “you know what, man? We’ve got a great producer on board, and we’re gonna try to get slightly bigger names — rather than just people that I know. (Gubler laughs again.) And it kept happening in steps; we got a little bit more money than the $20,000 that I raised.

Everything exceeded my expectations — the idea is to push it as far as you can. Here’s the budget; okay, but I’m still going to these locations and do the car chases, even though a lot of people with my experience wouldn’t try those things. The entire thing was, “oh, you’re gonna give me an inch? Let me see if I can take a mile!” And that was for every step of the project.

What special flavor did Snowfort bring to the film?

TH: I’ve known Travis for years; I wrote Cheap Thrills, which is a Snowfort movie. I acted in American Muscle and Starry Eyes, and I got cut out of that. But I’ve known and worked with Travis for awhile and knew he was the right guy for this material. If I made something that was worthy, I knew Travis could get on the phone and get people to watch it. He was on set the entire time, too. We have a friendship where we can yell at each other if we need to (Gubler laughs), or hug each other if we need to — it’s not like he was a guy in a suit standing over there with a calculator, you know?

Let’s talk about your awesome cast. Did you have to do a lot of screen tests or audition rounds?

TH: It’s like anything; you announce you’re gonna make a movie and they ask you how much money you have. And you go: “I don’t know yet; what kind of names do you think we could get?” People start punching numbers into a column and figure it out , and the money guys have their own ideas. Meanwhile, I’m making my own list with Matthew Gray Gubler at the top. (Gubler: “Awww.”)

You know I would have chosen Gubler immediately, but we had to go through this list with their guys. We do that, and we exhaust all those. Then I get to say, “Let’s try Gubler, we have a Snowfort connection to him, and I really want him — at least get me a meeting with this guy.” After that meeting, it had to be him.

I don’t want to say it was the power of “The Secret,” but it was about mentally projecting me making the movie with Gubler in the role. Then Ricky helped us out with AnnaLynne, and I think Shelia Vand came to us through a casting director, yeah Samy Burch. Sam Eidson (who plays Dwayne), I’d seen in a movie and wanted to cast him in this role. They asked who he was, and I said, “don’t worry, he has Zero Charisma" — that’s Zero Charisma, the movie, guys! We reached out to him directly and he didn’t have an agent, so we were able to reach out to him directly.

Obviously, there’s a lot of violence in the film. Can you tell me about your stunts?

We had a stunt coordinator from Louisiana named Kevin Waterman that was great, and a deep pool of people there that’ve been working for awhile, but Kevin helped us out with a lot of fisticuffs, gunplay, car chases, and things like that.

It’s very tricky; shooting these things take up a lot of time for what ends up being a small portion of the running time of the film. It’s a balance; I can’t take five hours to shoot what will make up two seconds of a 90-minute film.

TH: One night. It’s always a constant balance between making it look good and the amount of time it takes to shoot.

Now, I had a lot of fun watching the crazy, kickass women in the film, but I wanted to give you the chance to answer back to those who might say the film is misogynist. I don’t get that feeling personally, but I wanted to see how you felt about that, and give you a forum to do so.

TH: It’s one of those things where I feel that it’s a statement more about those people and their beliefs, more than about me or what I’m trying to do, ultimately. I’m juggling a 150,000 things, from costume decisions to performance choices to whatever. As the artist, it’s not my to job to go, “here was what I was trying to say.” Subconsciously, things come out, but I’ve been married to a very strong woman for over twenty years.

MGG: Raised by a strong woman.

MGG: I never got the misogynistic thing, because to me, I read it and thought, “oh, this is going to be a movie that’s going to be awesome for the females!”

TH: Right. I also did a movie called Deadgirl, which dealt with toxic maleness; part of that movie’s theme is a male character who sees a woman chained up and dehumanizes her and puts another female character on a pedestal. But what if you have a character who’s beautiful, sexy, and owns her sexuality, but what if she’s a bad guy? She can be that!

MGG: Violet is lovely! I’m lost. I can’t believe that anyone would think that! What movie are they talking about? 68 Kill?

TH: (laughs) I can understand it; you do have to be prepared for this. The more people you show the film to, the more opinions you’re going to get.

TH: But I thought the message of Deadgirl was completely clear and concise — these boys were toxic, and clearly not good — but people told me I was a monster and I endorsed raping of women. If that’s what you want to think, cool, but that’s you. How you feel about it is how you feel about it. No matter how much talking I do, I probably won’t change your mind.

(To Gubler) Well, I imagine you must have had fun being tossed around by beautiful ladies?

MGG: I’m used to it in real life! I legitimately mean that.

What’s the difference between the film and the book?

TH: I’m glad that you asked that.

MGG: It’s massively different, but the book is great!

TH: The author is super happy about it. It was important to me to who loved the book, then watched the movie NOT know what exactly was going to happen. I’d like the fans of the movie to also be surprised by the book and get a whole new experience.

There are certain things in the book that are great, but a movie has different beats. For example, in the book, Liza and Dwayne disappear after Chip runs away. It was an interesting choice. But for a movie, I felt they were part of the main story, so I brought them back. Violet in the book is more of a maneater, she doesn’t represent the possibility of love. The oral pleasure requests at the convenience store were also made by a man, not a woman. But when Matthew has to do it (at the request of a woman in the film), it turns into comedy.

(To Gubler) Last time you were here at Fantasia, I heard someone trying to get close to you got angry she couldn’t, and bit someone.

(Haaga and Gubler explode into laughter.)

MGG: Where’d you hear that??

Publicist Kaila Hier (in the background): It was legendary.

Did you know about that?

MGG: I don’t know about that!

Kalia, do you want to tell them?

Hier: I wasn’t on the ground for that. It was one of our Fantasia volunteers who got bit trying to keep the women away from him.

TH: What the fuck!

MGG: They were probably relatives!

TH: Is this what we’re looking forward to, man?

TH: Oh… this is my favorite!