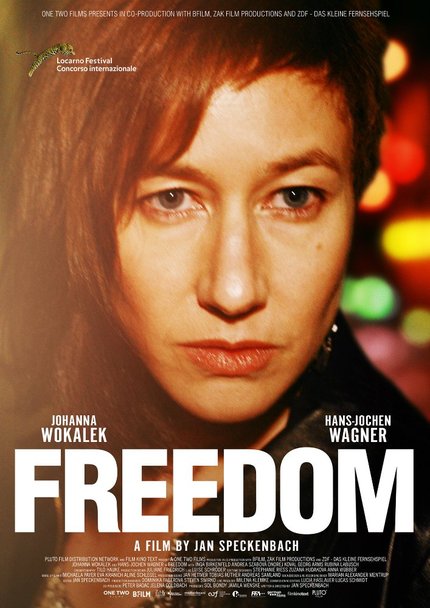 German filmmaker Jan Speckenbach unveiled his feature-length debut Reported Missing in 2012 and earned a tempting description as an 'apocalyptic neo-thriller which walks in the footsteps of Night of the Living Dead.'

In that effort, a young child disappears without a trace, prompting her father to assemble a one-man search party. His daughter is not the only one who vanished but a part of a mass chain reaction of young people disappearing. Eventually, it transpires that the vanished ones were not victims but decided to withdraw from their current lives on their own free will, making a spot-on parable of the younger generation, and not only in Europe.

To remove herself from her life, decides the protagonist of Speckenbach´s sophomore feature Freedom. With no further ado, the camera follows middle-aged Nora as she walks through an art museum, witnesses an incident in a bus, runs away, goes shopping (routinely) and ends up sleeping with a stranger.

After the young stranger finds out she used a false name, Nora flees and finds herself in a neighboring and less considerably fancy country. Amid the snapshots of Nora´s wandering are inserted scenes with Phillip, later revealed as the self-pitying husband Nora left behind with two small children, who caters to a comatose African patient, a sidestory of its own.

Nora becomes a runaway train from her middle-class and bourgeois life, a revelation changing the perception of the protagonist. In the beginning, she appears as somebody embracing carpe diem as her daily mantra, without being preoccupied about what might come next.

Once her background emerges, her behavior and her character acquire new nuances, such as being burned-out by her current life, driving her instinctively to seek a radical change. Yet the situation remains more complicated, as well as the concept of freedom Nora explores.

Speckenbach´s latest effort looks like a subtle spin on John Lennon´s getting “off the merry-go-round” from "Watching the Wheels" song, going against the gender stereotype of a mother never abandoning her offspring. Furthermore, the narrative bears an emblem of contemporary modern life in (post)capitalist secular society, the almost civilized malaise of developed countries, while challenging the notion of freedom as an identified necessity.

The wear-and-tear from daily routines in work and private life nourishing the growing void inside has became commonplace, although Speckenbach´s protagonist does not find refuge in nature in a bout of newly acquired transcendentalist reverie. Neither does she find satisfaction in a cult, which promises instant redemption.

Instead, she finds a refuge, paradoxically, across the Danube, in a post-communist country that has not really succeeded in shedding its historical stigma. Contrary to culturally rich and posh Vienna and a well-paid job as a lawyer, Nora hits the restart button in a less developed environment and as a housekeeper.

The move is less a musing on 'less money equals more freedom' and veers into the territory known from Ulrich Seidl's Import/Export, or more recently Yuri Rechinsky´s Ugly, the dialectics of so-close-yet-so-different countries, albeit both failing to offer the radical, desired change equally.

The director elevates dialecticism to a structural leitmotif, mostly in the form of dichotomies, whether it is for Nora and her husband Phillip, Austria or Slovakia, happiness and unhappiness, freedom and prison, happy family versus broken family, rationality versus instincts and so on. Despite the binaries, the director eschews a black and white approach, remaining non-judgmental towards the characters and their choices, sparing the film the painful conversion into a morality play. Freedom is anything but a morality play.

Moreover, Speckenbach curiously toys with the story's timeline, rearranging the plot to achieve greater impact and suspense. Assembled into three episodic blocks, the three-act structure does not feel formulaic, due to Speckenbach´s immersive storytelling, enhanced by Tilo Hauke's cinematography with saturated colors.

In fact, the three-act structure relates to the non-judgmental approach the filmmaker assumes, enabling him to position thesis and antithesis in the first two acts. He introduces synthesis, not as a third-act revelation, but as a cipher to be decoded by viewers. The director does not condemn nor condone the behavior of his characters but rather uses their actions to observe the possibilities and outcomes.

The raw and vivid camera style oozes into the film's overall poetics, contributing heavily to the naturalistic feel. In the sync with foreshadowed dichotomies, the approach contaminates the form. The psychological drama with inconspicuous social digressions becomes enveloped in a docu-like realism, tainted with moments of magic realism and dream imagery. It's crowned by the final scene and a callback to an image from the beginning of the film, symbolically closing the circle and the narrative arc.

Regarding the formalistic experimentation, the director, who has considerable experience in video-art, employs projections on bodies in a pragmatic way of externalizing the mental whirlwinds of two leading characters. A technique common in theatre is approached by Speckenbach cautiously, resembling more of a visual attraction than a tool.

While Freedom contains numerous references to Henrik Ibsen's A Doll's House, the film is not a revision of the Norwegian master's play, though both authors share a knack for realism. Where Ibsen exercises critical realism, Speckenbach applies clinical realism in his observations of modern life, its complexities, ambiguities and, above all, a person's tumultuous struggle with herself and himself.