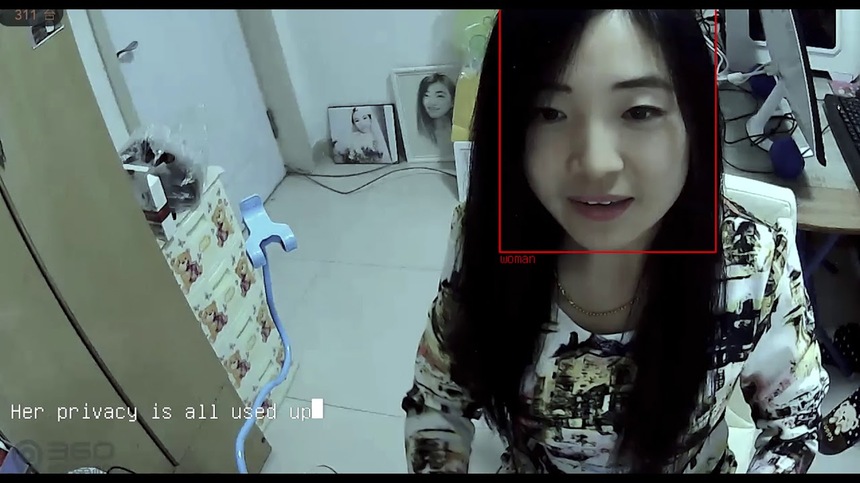 The ether and digital clouds are brimming with data. Flying zeroes and ones are trafficking in a constant flux, creating frequently unwanted, unwilling and maybe even unauthorized digital imprints of every person walking the world, with the small exception of uncovered, un-networked, territories.

The feature-lenght debut Dragonfly Eyes by revered Chinese artist Xu Bing wields an enticing conceptual dimension. It's a film entirely carved out of 10,000 hours of authentic footage coming from CCTV, live streams and other kinds of freely accessible and circulated audiovisual material.

The gargantuesque amount of footage, the pastiche of different kinds of events from suicides to car crashes to CCTVs to surveillance material from workspaces to webcam shows, serve as building blocks in a narrative of one man's obsession about a woman and the woman's obsession about finding the right path in life.

The title refers to the protagonist, Qing Ding, known as "Dragonfly", a novice at a Buddhist temple. The novice soon succumbs to secular temptations, embarking on a wandering journey in search of a purpose. A computerized voice clears whatever puzzlement there might persist regarding the title, explaining that a dragonfly has over 20,000 eyes; a parallel is made to our current age and the devouring, unblinking, uploading gaze of Big Brother.

The Locarno Film Festival has became one of the most vocal supporters of the hybridization effort on the verge of fiction and documentary forms. After presenting a seeming myriad of iterations, Xu Bing's entry embodies yet another unorthodox cross-over between live-action fiction and painfully authentic snapshots, mapping life, the world and the events in between them.

While some filmmakers attempt to blend the two formats into a seamless entity, others tinker with their borders, experimenting with the prevalence of one over the other. Bing's effort veers mostly towards videoart practices, Dragonfly Eyes being more suitable for gallery exposition. It is clear, though, that the narrative emerged a posteriori whilst the filmmaker toyed with bits and pieces, letting montage do the magic, akin to the famous Russian experiment refered to as the Kuleshov effect.

In a bizarre way, Bing´s docu-fiction recalls the bygone era of mondo films and shockumentaries, exposing viewers to allegedly authentic footage of an accidental drowning, a suicide or a drastic plane crash shot from a dash-cam. The era of technology that gave rise to the selfie culture brought clouds oversaturated with audiovisual materials.

The sheer volume of clips that Bing and his assistants had to comb through, the sheer bulk of ready-made audio-visual substance available for immediate perusal, sketches a portrait of a world drowned in obsolete images lapsing into a virtual reality it is spurning. Even the risqué acts came from public annals; the director/artist did not scoop anything from the twilight zone of the collective digital unconsciousness of the dark web or chan2.

Bing tones down the shock-value, devising a clear rhythm and pacing the cues to not overload the viewer with disturbing imagery. The use of such material remains in the service of Dragonfly Eyes as a conceptual project. The mundane, the comic and the drastic are preserved in balance while Bing is very conscious of the degree of both he can afford to wield.

Despite the melodramatic veneer of the story, the helmer along the two scriptwriters Zhai Yongming and Zhang Hanyi rejuvenate the apparently timeless narrative design (Romeo & Juliet, Tristan & Isolde etc.) spiced with soap opera twists (another oeuvre at Locarno Film Festival explicitly acknowledged the gravitation of low-brow television genre and life in posthumous comeback by Raul Ruiz, The Wandering Soap Opera).

While the central pair is depicted by various (naturally anonymous) persons by the nature of the project, though each is voiced by the same actor, respectively, and the story arch resembles the anxieties of contemporary man, Dragonfly Eyes morphs from the state of generic, haphazard and even ridiculous plot points to a modern day myth dealing with human existence in a space full of opportunities, hectic life, soars and fall downs framed by a secular versus spiritual way of living.

Whether the narrative plane of Dragonfly Eyes remains just an appendix, a template holding the audiovisual mesh together, would not be an appropriate question. Human brains are wired to search for narrative patterns and impose them anywhere, hence the mytho-poetic modus of thinking. Xu Bing outwardly molds the narrative that way.

Nevertheless, the conceptual plane of the film, its video-art nature, tops Dragonfly Eyes as a story alerting towards new (an-)aesthetic order, the technology altering not only art, culture and society but manner of perceiving the world.

Labeled as a "film without actors or camera crews", the label does not do justice to Xu Bing's non-film of a creation, a thought-provoking docu-fiction in a cross-bred format, contributing to the advancing aesthetics of post-humanism.