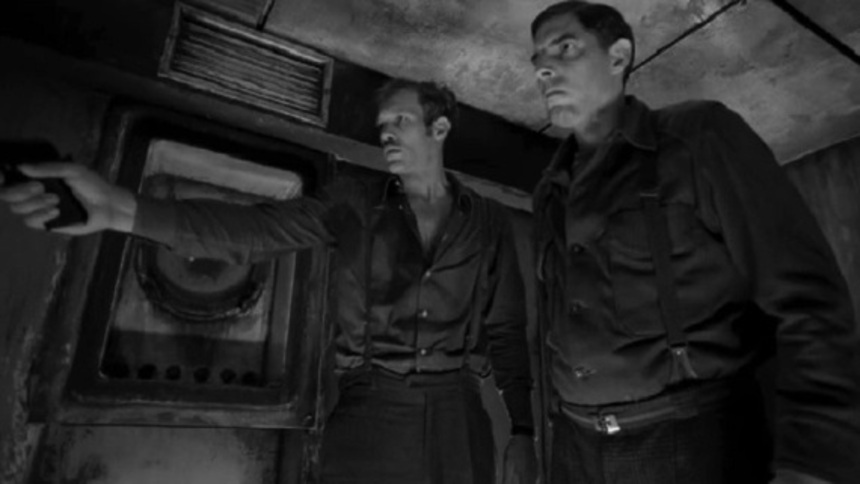 French multihyphenate, underground filmmaker and punk poet F.J. Ossang returns behind the camera in his latest and freshest offering, 9 Fingers  (9 doights) after a seven-year hiatus. The filmmaker returns to his iconic style and the genre of mystery noir.

Resuming where he left off in Dharma Guns formalistically, 9 Fingers uncoils as an accidental noir film. The protagonist called Magloire (played by Paul Hamy who recently headlined Joao Pedro Rodriguez´ The Ornithologist) bumps into a dying man while avoiding ID check who hands him a wad of cash. Not a godsend though, more of a burden proves to be the gift of cash as Magloire becomes a hostage of a gang scheming a heist. The heist goes awry, Magloire´s status shifts from being a victim to being an accomplice and they all flee on a polonium-infested ship.

The embarkment on an opaque maritime adventure wraps the act one and transforms the films from a traditional noir into Ossang´s own brand of an existential paranoid thriller. The vacuum of action, the lack of any direct confrontation, a constant yet unidentified threat and most of all, the claustrophobic composition evokes works of the scribes from the strand of the theatre of absurd. Although, the humor operates in the same mode as the threat - being invisible albeit still present underneath as a deadpan exquisite.

Shot in shadowy black and white, 9 Fingers most defining characteristics is its elusiveness and mercuriality. Even if it is clear from the first minute that the film will be anything but a regular genre fare, which would be major disappointment given Ossang´s credence, the director´s punk attitude reshuffles the initial formal configuration.

The American Noir-leanings soon give way to a philosophical discourse symptomatic for French writings. The delusional ramblings of the passengers as madness, seasickness and polonium start to clog their minds evokes existential poetry as does their almost mythical journey to “Nowhereland”, a tempting but dangerous kind of utopia.

The claustrophobic framing, delusional states undercut with existential references and curse of repetition and disorientation contribute to a smooth tonal transformation into a pre-apocalypse on a ghost ship bearing mad prophets. As unknown malaise spreads among the crew, 9 Fingers borders on a nautical spin on Albert Camus´ The Plague leaving behind decaying minds instead of decaying bodies.

The film bears the versatility of its multihyphenate artist to the breaking point when verbal and visual aspects appear to live their separate lives. As the dialogue surrenders to the tendencies of the poetry invoking existentialism, apocalypse and delusion perplexing as an enigmatic dada play (at one point even jocularly autothematizing its own opaqueness), Ossang wields not a philosopher's stone but a punker´s stone transmogrifying film noir aesthetics into more antiqued albeit more charming and compelling form of German Expressionism.

While visual and verbal strands disjoint, the turn to Expressionism unites them as the aesthetic is more accommodating to the cryptic poetry and pre-apocalyptic vibe whilst cementing the film´s form eventually into a myth the same way Ossang warped Dharma Guns into a fable.

Ossang´s latest oeuvre is not a purposeless formal extravaganza despite being an amalgam of different styles governed by punk’s no holds barred attitude though the French helmer manifests sensibility for the history of cinema and unlikely pairings. Unacknowledged humor and comicality is left up to viewer’s discretion along the final verdict whether 9 Fingers is a cinematic dada-punk exercise, an idiosyncratic take on a man’s existential plight or preserving ambiguity of both forms.