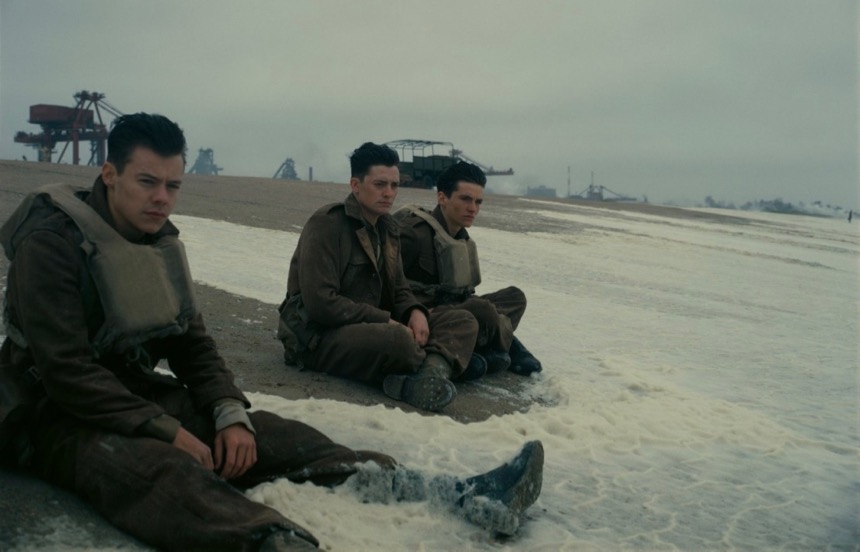 After a slew of tired franchise entries and superhero tentpoles, the summer finally delivers a truly essential big screen experience. Austere and nerve-racking, Christopher Nolan's Dunkirk is a bold big-screen gamble that employs an experimental structure and little in the way of dialogue. Some viewers may have trouble engaging emotionally with the film, but its sheer power, especially in its rousing climax, is hard to deny,

Dunkirk chronicles the end of the Battle of Dunkirk - during which allied forces were surrounded by the German army early in World War II - through three narrative strands, on the ground, in the air and at sea. On the beach, a young British private tries to sneak aboard a ship and escape the bombs raining down from above. At sea, a civilian boat makes its way to Dunkirk from England, picking up a shell-shocked officer along the way. In the sky above, a British fighter pilot picks off German bombers.

A proven perfectionist, Nolan's films have always told stories of men consumed by obsession. In Dunkirk, despite the presence of familiar faces Tom Hardy and Cillian Murphy, there is no single point of focus. The many characters who intersect across the three stories have simple directives and seldom speak. Nolan doesn't allow us to become emotionally invested in the fate of any of these individuals, who are but small pieces in a greater event, which is his true focus.

They may not have many lines, but the whole cast of Dunkirk excels, delivering performances where actions and expressions are more important than words. Hardy, whose very few lines are occasionally unintelligible, gets to play the hero in the cockpit, while Murphy and Mark Rylance deftly tackle the morality of the boat narrative. Much talk has been made of former One Direction star Harry Styles (aka H aka Harrah aka Hazza) making his big screen debut, but although he acquits himself well, it's newcomer Fionn Whitehead who steals the spotlight in the land narrative.

Continuing their streak of strong collaborations, Nolan once again employs a Hans Zimmer score to great effect. Using an ever-present ticking sound, jutting strings and ominous horns, the music adds to the film's perpetual intensity. It's a gimmick that's pushed very far, but an effective one.

Teaming up for the second time with Nolan following Interstellar, is cinematographer Hoyte Van Hoytema. Sweeping vistas of the foggy beach set the scene, with masses of troops (6,000 extras were used) stuck between the sea, a bombed-out town and a low blanket of cloud. With IMAX cameras strapped to the side of genuine old fighter jets, the film's swooping aerial shots place us in the thick of the action.

With some beautiful practical effects and imposing sound design, Dunkirk becomes a remarkable technical achievement that expertly chronicles a harrowing event. Yet Nolan's restraint in his choices proves just as effective. 400,000 soldiers are surrounded by an army, yet we never see a German soldier on screen. The enemy is invisible, which makes the fear written on the face of each soldier on that beach all the more powerful.

Nolan's shortest film since Following, Dunkirk has a laser focus that escapes most sprawling war epics. As a very experimental auteurist work, it may not be everyone's cup of tea, but there's no stronger argument for seeing a film on the biggest possible screen this summer.

Do you feel this content is inappropriate or infringes upon your rights? Click here to report it, or see our DMCA policy.
Christopher NolanCillian Murphyharrahharry styleshazzaKenneth BranaghMark Rylanceone directionTom Hardy