Fantasia 2017 Review: KING COHEN and the Art of the Steal

Steve Mitchell's documentary offers a brisk look at the weird and wild films made by the great Larry Cohen. 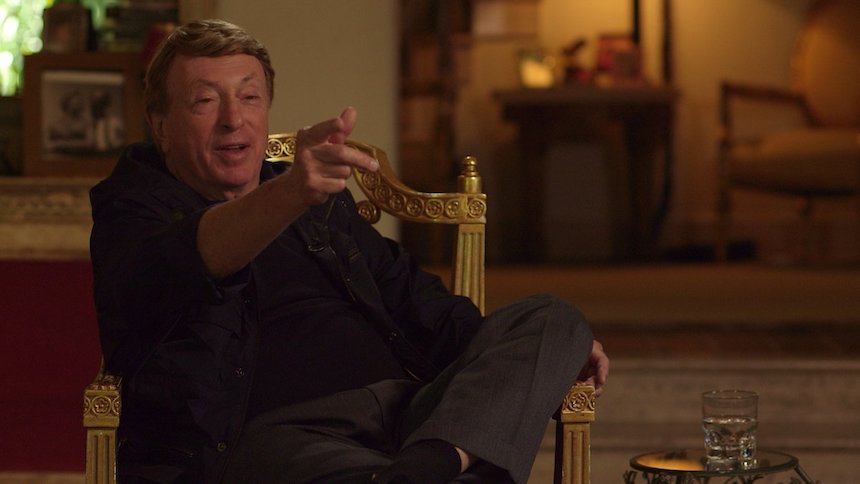 "Anybody will put up with anything if they think a movie is being shot." These are words of wisdom, but also kind of a guerrilla filmmaking mission statement, from filmmaker Larry Cohen.

Steve Mitchell's King Cohen offers a breathless sprint through the writer-director-producer's prolific 'lets just shoot the damn movie!' ethos, from writing for NBC's Kraft Theatre in the era of live television in the late 1950s through episodic shows like The Fugitive and Branded -- "The bulk of the series, Dude" -- in the 1960s to directing racy social commentary (Bone, Black Caesar, God Told Me To, The Private Lives of J. Edgar Hoover) in the 1970s and gonzo genre-mashing creature features in the 1980s (Q: The Winged Serpent, The Stuff), before finally settling with writing mid-tier Hollywood blockbusters in the 1990s and 2000s (Guilty As Sin, Phone Booth).

Cohen himself and many, many others try to pin down and elaborate upon the essence of the Larry Cohen magic. Anecdotes and stories are told, and these service his cult fanbase as well as giving a solid primer into the the man's work over a two hour span.

There is some insight into the ego-driven showbiz process, as Cohen puts on more and more 'hats' as he progresses in his craft. He became a director to protect his screenplays during the production process, and became a producer to protect the 'integrity' of his direction. Now he becomes a raconteur to protect the legacy and the myth of himself.

For the past decade, this type of documentary -- the interviews and clip-show elaborating on a cult filmmaker or a specific genre -- has become kind of a subgenre unto itself. Ever since Mark Hartley's Not Quite Hollywood blasted on the scene in 2008, there seems to be half dozen of these 'bigger than a DVD feature' that play the festival circuit.

They all seem to have a series of regular guest speakers, including John Landis, Joe Dante, J.J Abrams, and Martin Scorsese. King Cohen can and does often fall into a struggle to corral all the talking heads and requisite movie clips into a manageable length, and in doing so, it comes across as softball at best, hagiography at worst.

The film is at its charming best with the myriad tales of how Cohen and his small production teams filmed on the streets of New York (and Washington and LAX) with no permits, staging some scenes like live theatre and even capturing the reaction shots of real people as a bonus. These car chases and shootings, one even in a massivel police parade, represent the ongoing quest of Cohen to get maximum production value with minimal red tape and money, be it actors jumping from moving cars, shooting each other in broad daylight, or machine guns being fired from the top of the Chrysler building, with shell casings raining down on the commuters below.

With all of this rebel spirit and outright location theft, it makes one curious as to what Cohen thinks of movie piracy or remix cuture, however, this goes unanswered in the film. On a somewhat related note of not quite answering things are claims that 1973's Black Caesar essentially started Blaxploitation as a genre; that bit of personal hubris somewhat ignores a little 1971 film called Shaft. Maybe you've heard of it.

The documentary's best editing rhythms are with Cohen's regular leading men, Fred Williamson and Michael Moriarty, who actively contradict the details of some of those very same stories. Separate interviews cut in clever ways offer the feel of an old married couple interrupting each other, while trying to tell both the 'best story' and what 'really happened.' Cohen's ex-wife and current wife offer some 'I was there, but I'm not a filmmaker' perspective. Some of the included interviews could probably have been left on the cutting room floor, with no loss other than run-time.

Comparisons made of Larry Cohen to another no nonsense, get-it-done, director who came a generation before him, cigar-chomping Sam Fuller, are also interesting. That Cohen (unknowingly) bought and lived in Fuller's house for decades, and even cast Fuller in a major acting role in A Return To Salem's Lot was an interesting instance on the 'it's a small, insular world' aspect of Hollywood.

However, other than, 'it was a different era' and stuff like this could not happen after 9/11 or social media,' there is precious little context or insight in the film. Ryan Turek, a former web-journalist turned producer (for Blumhouse) is interviewed, as if to tease the subject of where someone like Cohen might fit into the horror or pop cultural 'expensive indie' scene of today, but neither the interview nor the film seem interested in processing Cohen, other than in the past. Scenes of Cohen peddling merchandise and autographs on convention floors add a little hand-held location variety to break up the clips and the talking heads, but little else.

The film struggles to 'wrap things up' in the back 30, and, unflatteringly, starts to repeat itself. Entries in this doc-subgenre do this more often than not.

While King Cohen basically follows the structure of going through Cohen's massive list of film credits in chronological order, it lacks the discipline or the singular point of view of Noah Baumbach and Jake Paltrow's De Palma, or the historical significance of something like 78/52's shower scene deconstruction. Nor does it have the grit and curious pathos of something more guerrilla and esoteric like The Search For Weng Weng.

King Cohen's love of the weird and wild movies that Cohen made so idiosyncratically will please the fans, and possible entice some of the uninitiated to take a closer look at this work. With a Larry Cohen joint, perhaps, that is entirely enough.