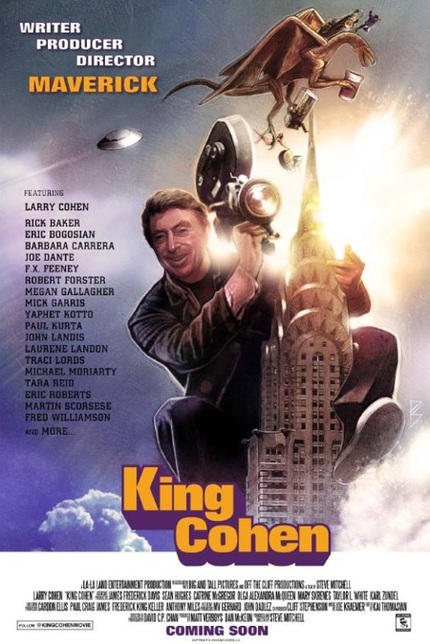 Documentaries about film have always been received well at the Imagine Film Festival in Amsterdam, and Steve Mitchell's King Cohen, which was shown this year, is not an exception. It helps of course that the subject of the film, writer-director-producer Larry Cohen, is a very entertaining one.

As a director, Larry Cohen has been responsible for several cult classics in the seventies and eighties, most famous of which are Bone, It's Alive, Q, and The Stuff. But his real prowess and influence was probably as a writer, with loads and loads of fan favorites bearing his name in the credits.

As the documentary shows, Larry Cohen wrote plenty of scripts, but after a few years he got so annoyed by how these were tainted by mediocre directing, that he decided to become a director himself. Later, he became so pissed off by how producers treated his films, that he decided to become a producer too. In King Cohen, director Steve Mitchell doesn't shy away from portraying Larry as a man full of himself, sometimes difficult to work with, and playing loose with rules (and the truth). But the documentary also points out the man's cleverness, his devil-may-care forward attitude towards diversity, and his respect for Hollywood stars, even those who were past their prime.

While many of his films are already curious enough to warrant a documentary of their own, King Cohen shows a mostly chronological overview of Larry's career. What spices this up is a wealth of behind-the-scenes stories, told by a great selection of film veterans, ranging from critics, to actors, to fellow directors. Larry Cohen is still seen as the "king of stealing shots", meaning he often shot footage on the sly, in areas he never got permission to shoot. When one shoot caused panic in the neighbourhood, Larry sent his assistant director out in the streets to film it immediately, to incorporate the footage afterwards. It's one example out of many which will raise an eyebrow or two.
These tall tales are often very funny, and one particularly hilarious bit in the documentary has Larry Cohen and Fred Williamson debunk each other's side of the story concerning some stunts in Black Ceasar.

A bit of editing at the end would have made the documentary even better (some people start repeating themselves AND each other while lauding Larry), but all in all I had a lot of fun with this.
The Amsterdam audiences thought so as well and awarded King Cohen a rating of 7.9 out of 10.