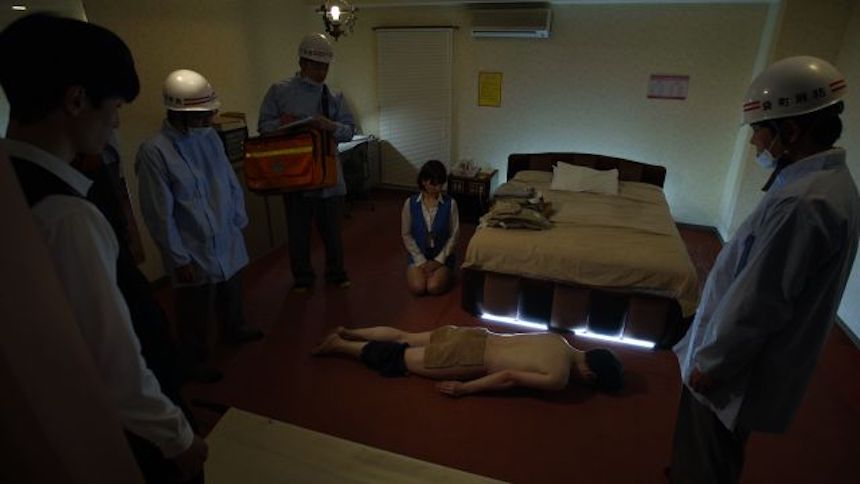 In french, an orgasm is sometimes referred to as, la petite mort, or little death. The phrase can also infer, with less existential hubris, simply a nervous spasm. Kobayashi Toshimasa playfully uses the two ideas in his feature film debut Almost Coming, Almost Dying to generate gentle comedy predicated on the suffering of a man who has failed to achieve orgasm, and by extension is failing at life.

Anchored by a sweetly self-deprecating performance from deadpan Japanese comic Nou Misoo as an introverted, nerdy fusion of Matsumoto Hitoshi and Matthew Broderick. Looking a bit like the latter, half-way between Ferris Bueller and Election, Misoo plays an unemployed layabout on the cusp of his 30s named Nakagawa Manabu. Clearly a man-child with little prospects, he lives at home and has his meals brought into his bedroom by his mother, presumably so he can eat them in the privacy of his sad existence.

While he continues to struggle - OK, barely bother - to get a Manga published, his father, possibly playing the nepotism card, gets him a solid, and perhaps more importantly, low-stress, teaching job. Finding he is actually quite well suited to this employment, Nakagawa celebrates his 'success' by getting laid via a secret trip to a pleasure hotel. Unfortunately, during this sexual encounter, he has a seizure and ends up in the hospital diagnosed with a blood vessel condition in the brain called RCVS.

Now you probably know that Japan has a thing for mascots, one can only imagine how many there will be for the 2020 Summer games in Tokyo, or what they will look like. As it stands, these saccharine-cute avatars are not only for consumer products and sports teams, but each region of the country has its own cute Pokemon. Kumoman, the title of the source Manga for this film, seems to draw its inspiration from the Kumamon mascot for Kumamoto prefecture. This life-sized Panda-Mon is, however, wearing its brain-matter on the outside, vaguely menacing, and wielding a baseball bat. During Nakagawa's seizue it is Kumoman who whacks him across the back of the head with glee. And Kumoman always seems to be lurking on the periphery during Nakagawa's recovery, Louisville Slugger in hand. But the marketing (note the trailer below), the Mascot, and the silly structural energy of the film disguise a rather intelligent treatise on the nature of dignity. It essays the budding confidence (or wisdom) of the late bloomer as a special bonus.

After a sloppily introduction which loops from the middle to the beginning of the story to no clear purpose -- certainly not the films strength, and possibly a byproduct of its TV aesthetic, the bulk of the story is about Nakagawa's recovery process in the hospital. The shame of how and where he was found, literally with his pants down in a house of prostitution, must be hidden from his family at all costs. This becomes the source of the film's best moments, prominently featuring Nakagawa's mother, who becomes obsessed with getting his shoes back, and puzzled why the Paramedics did not include them with his personal items.

The doctor, cognizant of the man's shame, doesn't tell the parents the circumstances of Nakagawa's collapse, but clues are peppered about, and the extended family standing in the hospital room and lobby seem to have little else to talk about when not awkwardly offering their support. There is a Hercule Poirot mystery in miniature surrounding the disappearance of 'a nice pair of new shoes,' one of the standout vignettes of the film.

Meanwhile, due to his RCVS, he is not allowed to relieve himself, either his pent up sexual frustrations, or, at the other end, even contract his sphincter muscles for a bowel movement. This results in comically long stays in the bathroom hoping for god and gravity to provide relief. Of course in hospital situations, this time is spend with multitudes of staff and visitors popping in and out, with the door frequently open to the hallway. Shared rooms, and awkward nurse visits are the stuff of true horror to both the shy and outgoing alike. During his recuperation, anything that might cause his blood pressure to rise - socially awkward stresses for instance - could cause him to literally die of embarrassment.

Misoo, with his cow-licked, on the verge of greying, frizz of hair, and his wide melancholy eyes, takes it all in stride, cringing and contriving to minimize his many humiliations. His failure to do the latter is subtly calibrated for our viewing pleasure, at the same time smuggling in a valuable life lesson, and set to an unorthodox score by the Gentle Forest Jazz Band.

Shame is comedy. Comedy is fuelled by shame. There is, I am guessing, no culture on earth that does not intertwine the two for entertainment. Almost Coming, Almost Dying is not particularly polished, a collection of little situations netted together by a effective lead performance and a director willing to experiment with the form. They do add up however, in a surprisingly poignant way, all the while offering a nervous spasm or two.