10+ Years Later: MIAMI VICE, Exotic, Experimental and Entertaining As Ever 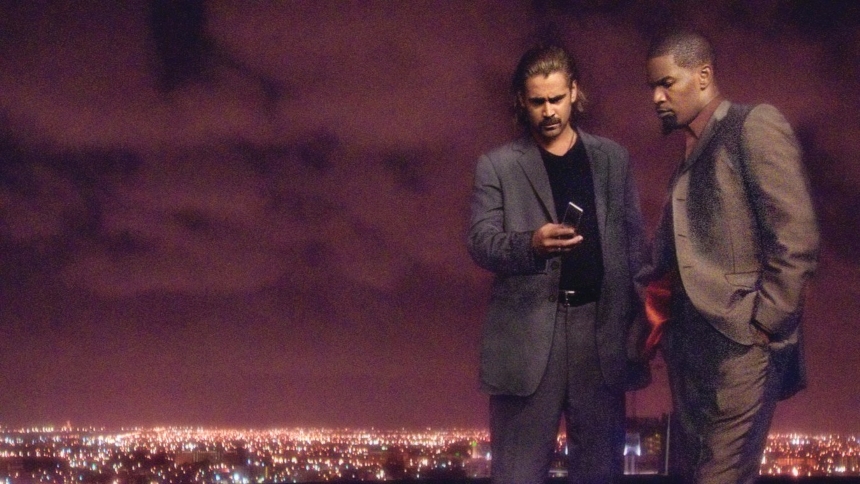 Never before in cinema have two men in expensive suits talking on cellphones on a downtown rooftop looked so beautiful. Perhaps never again.

Michael Mann's gloriously expensive 2006 up-scaling of the quasi-camp TV show Miami Vice (on which he served as producer for five seasons) landed in the middle of the director's radical experiments with digital cinematography. If the 1980s series is remembered for its white suits, pastel shirts, and fast cars in the Florida sunshine, the film is remarkable for its twinkling twilight skyline and coral coloured clouds uniquely rendered with digital noise.

Mann (and ace cinematographer Dion Beebe) initially dipped their lenses into the high-gain/high-grain look of digital video with 2003's Collateral. After his definitive crime drama Heat did such a superb job using the cities locations and geography in a more traditional fashion, the intent was to capture night-time Los Angeles in a fresh way.
Much of Collateral was shot on traditional 35mm filmstock, and despite being a finely tuned action thriller, the takeaway was the low-light, often surreal panoramas of Los Angeles as Jamie Foxx navigates his taxicab around the shimmering city after hours. The digital bits were the distinguishing bits. A serendipitous shot of a coyote padding along sodium-vapour lit urban jungle served as a grace note to the memorable look of the movie. It is worth pointing out that this shot exists only due to the lean-crew and low light techniques afforded by digital shooting.
Beebe took this video-styling to the extreme (some might say nadir) with 2009's period gangster biopic, Public Enemies, a film that seemed to push its audience away almost entirely due to aesthetics. Consider the evolution of this sort of agressively-video look a loose trilogy in Mann's filmography, made on the cusp of the industry moving beyond chemical emulsion film.
It is notable that by the time we get to Zodiac in 2007, the technology had caught up to make the differences between film and video less obvious to the layperson -- even educated cinephiles might not have noticed that David Fincher's masterpiece (shot by Harris Savides) was not done with filmstock. A decade later, with ever increasing resolution and light sensitivity, Mann's initial forays with the Thomson Viper 1080p camera and its ilk, stand out as an avant garde moment in popular entertainment.
Format history lessons aside, Miami Vice, remains the sweet-spot right in th middle, and sees Mann and Beebe capture imposing loading docks, leafy trailer parks, busy urban highways, jungle drug palaces and thumping night club interiors in magnificent ways, befitting both the films heavy price tag, but also, somehow, carving out a latitude of experimental freedom. All the more remarkable considering rumours and tales of a difficult multinational shoot.
The plot of the film of course revolves around Vice detectives Crockett and Tubbs -- Colin Farrell and Jamie Foxx seamlessly reinvent the roles and chemistry of the small screen into something vaguely familar that nonetheless stands on its own. They go undercover as transportation experts for a technology savvy, transnational drug cartel. This offers several opportunities to shoot go-fast boats and sleek cargo planes framed against an endless choppy ocean, or dwarfed against the best cumulonimbus formations you never knew you wanted to see. If the chance arises to see Miami Vice on the big screen, be sure to note the shot of a plane heading from Columbia to Florida. It is so impressively massive that it all but breaks the movie by the sheer scale of the photography.

An extended, climatic shoot-out at the end of the film offers muzzle flashes that, again, look exotic due to the nature of the Thomson Viper camera. Mann's 'you are there' unfussy realism is further highlighted by the Foley team using more natural sounding gunfire noises. This is not the 'bang bang' we have been conditioned to associate with firearms over 80 years of sound cinema, but rather the 'pop pop' sound which guns actually make when fired outdoors.
Mann was never going to re-capture the iconic midtown gun battle from Heat, which glories in how gorgeous it is, framed from the point of the view of that films antiheroes being professional and desparate simultaneously. The fight here is with skeevy high-tech drug operatives and white supremacists. It is messy urban warfare, and brutally unsexy. It is remarkable that this exists in a summer blockbuster, but nevertheless, elevates the picture with a dour gravitas.
Miami Vice has pretensions towards the art-house treatment of a standard pot-boiler crime story, thus proving Roger Ebert's observation that it is not what the film is about, but rather how it is about it. This is no origin story (and thank god for this) but rather one that drops its audiences in media res of an ongoing sex-slave operation in a swanky nightclub involving not only the two detectives, but their highly professional extended Vice squad. Truth be told, I prefer the more languid underwater opening of the Director's Cut on Blu-ray, but the theatrical cut is a mission statement that there will be no traditional blockbuster spoonfeeding or simplicity.
Before they can nab the bad guys, a phone call from a panic-stricken informant (a briefly used, but exquisitely jumpy John Hawkes) lets them know another operation, at the federal level, is about to go horribly wrong. And it does, involving neo-nazi goons and some military-grade heavy caliber rifles.
The FBI commanding officer (Ciarán Hinds) has no way of knowing which of his inter-department partners is leaking operational information, so he recruits Crockett and Tubbs go undercover to find the leak, and get intelligence on how white supremacists have gone so high tech in their business dealings. This leads their team to Haiti for a meet and greet with the Colombian operation that is supplying Ukrainan Ecstasy to American gangs.
Posing as ace smugglers ("we don't audition for work, work auditions for us") and sabotaging the competition, they are soon on their way up the corporate criminal ladder which includes memorable, decidedly offbeat, villains such as John Ortiz in designer spectacles and a magnificently bearded, but frighteningly dead-eyed, Luis Tosar.

Chinese superstar Gong Li is also introduced as the business liaison of the cartel, she has a fling with Crockett over mojito's in Havana, mainly to vouchsafe their criminal bonafides, but also, it is hard to resist Farell's full eyebrows and perm-a-clock shadow.
In a lesser film, the sweaty sex would be just titillation for the punters, but here their Cuban tryst is contrasted against Tubb's getting intimate with his wife, Trudy, back in Miami. Played by the extraordinary Naomi Harris with an unfortunately questionable Noo-Yawk accent - if there is a gripe to be had about Miami Vice, it is the number of actors from the British Isles playing Americans and struggling with accents. (Note also Eddie Marsan and his wackadoodle California-Texas verbal mulch). Trudy is not only married to Tubbs, but is also to be on the Vice team as the information specialist. Their scene at home is extraordinary in how the actors and direction impart a comfortable air to their passion. I would argue that this is something rarely achieved in American cinema, and fare less at the multiplex. But I digress.
By contrasting these two sexual encounters, Mann highlights that he is not after his leads getting laid on screen, but rather aims to show-not-tell how these men (and women) have dangerously mixed business and pleasure in specifically different ways.
A small, almost goofy, joke by Tubbs in his love-making with his wife does an subtle amount of heavy-lifting when Trudy becomes the damsel in distress later on. And lest any progressive notions of the sea of testosterone conatined in this picture threaten to throw out the baby with the bathwater, note that Gong Li's business woman, Isabella, proudly divulges to Crockett that her mother did things on her own terms, publically, without a man - in Cuba! - and that she, Isabella,  currently exists comfortably and competently in the world of hypermasculine drug traders.

Note also that Trudy's rescue is thrillingly achieved not by Crockett or Tubbs, but rather the Vice team's sharpshooter, Gina.
Played flint-eyed by Elizabeth Rodriguez, the actress impressively hijacks the movie for a single powerhouse scene. Gina has to face down an Aryan Brotherhood thug with his finger on the trigger of an explosive device (wrapped around Trudy's neck), and her professional no nonsense control to the situation would be hard to conceive in another film when not given to either of movies main stars. Miami Vice stands out precisely because it focuses on the Team, their confidence and co-operation, and not the showboating individual. Consider that Miami Vice played in the multiplex next door to the flat, muddled, star-vehicle that is J.J. Abram's Mission Impossible III.
Experts doing their jobs expertly, you see fingerprints of this everywhere in his filmography, single out Mann's auteur approach to storytelling and character development. The situation is the thing. It is created by people very good at what they do coming into conflict with other people who are also very good at what they do. Loose cannons, megalomaniac psychopaths, or incompetent bureaucrats are not needed for cheap and easy drama. Professionals, believably doing their thing is far more thrilling. There is a no-nonsense poetry to the exposition in the Miami Vice, where functional jargon manages holds its own with the action.
There few truly adult-oriented blockbusters made any more; frankly, there were never very many. And yet, here, Mann essays a modern policing fantasy (a precedent to Denis Villeneuve's equally cultivated, but far more political, Sicario) with a patient intelligence that is elevated immensely with its vast and agitated digital skylines.