Review: WAR FOR THE PLANET OF THE APES Threatens Extinction, While Holding Out a Sliver of Hope 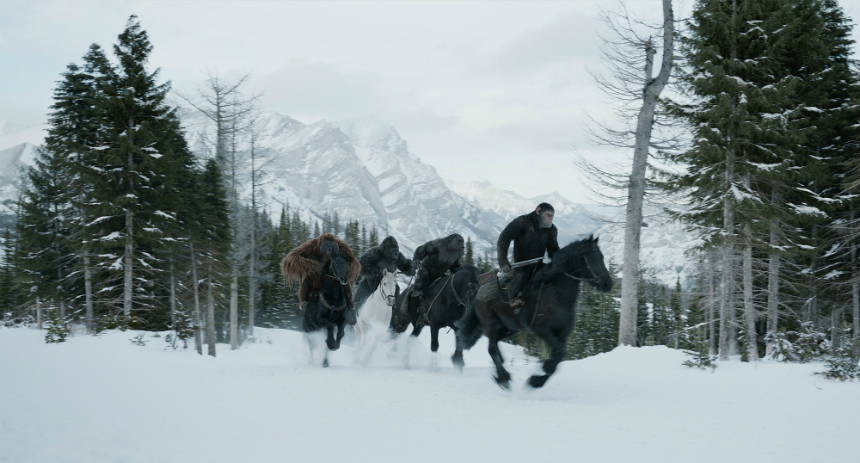 Foiling low-bar expectations, War for the Planet of the Apes takes advantage of its built-in name recognition to create a gloomy, tense atmosphere in which nothing is guaranteed and anything is possible.

Strangely enough, the film reminds me of director Matt Reeves' intimate, suspenseful drama Let Me In, an adaptation of the novel that inspired the superb Swedish thriller Let the Right One In. Reeves directed episodic television for years before making Cloverfield, his feature debut. The monster movie was limited to some effect by the limitations of its found-footage aesthetic, in a different yet related way to how Let Me In followed the basic outline of its predecessors.

The rebooted series began with Rupert Wyatt at the helm for the entertaining Rise of the Planet of the Apes, which borrowed elements from Conquest of the Planet of the Apes, and quite rightly, since the fourth installment of the original series was a daring, brutal, and thinly-disguised commentary on racial relations in the U.S. Rise was rousing and polished, if never as provocative as Conquest.

After Wyatt departed, Matt Reeves come on board Dawn of the Planet of the Apes, and then brought Mark Bomback along for a rewrite of the script. Set 10 years later, the film established a wary detente between the human race, decimated by a worldwide virus, and the apes, who want nothing more than to be left alone. Eventually, one ape allows his own anger to cause a division in the community, while the humans become increasingly desperate and began striking out.

War for the Planet of the Apes picks up soon thereafter. Caesar, once again portrayed by Andy Serkis (in a motion-capture suit but thoroughly convincing, nonetheless), has done everything he can to protect the apes and the community, in turn, is increasingly reliant upon his leadership. Hiding out from the humans in a forest, however, does not provide absolute security, especially when the remaining human tribe is led by the Colonel (Woody Harrelson), a fearsome figure who is convinced that the apes must be wiped out.

Whereas Dawn featured human civilians, War focuses exclusively on the military under the command of the Colonel, who has assumed the guise of Colonel Kurtz (Marlon Brando) in Francis Ford Coppola's Apocalypse Now. This Colonel is very obviously an homage to that character, though he does not simply ape his inspiration. Instead, Harrelson infuses his Colonel with a steely-eyed madness, married to a singular purpose and an absolute absence of fellow feeling.

Caesar, in contrast, retains his humanity, as it were, or what we humans would recognize as "the better angels of our nature," as President Abraham Lincoln once said. Even as he seeks to do what is best for his fellow apes, Caesar must battle his own darker instincts, of a similar type that devoured the angry, rebellious Koba (Toby Kebbell) in Dawn. 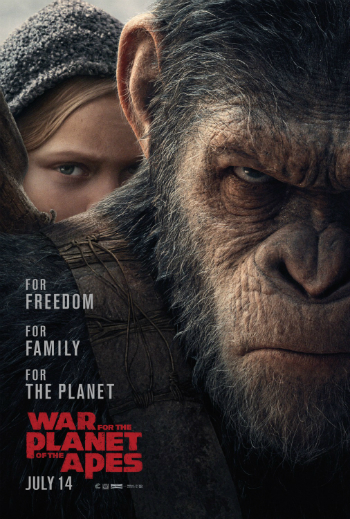 Collaborating again with director of photography Michael Seresin, film editors William Hoy and Stan Salfas, and music composer Michael Giacchino, Reeves envisions a world where the possibility for happiness exists, but a long and difficult journey will be required. Often wrapped in shadows or outright darkness, the action unfolds in a deliberate, inevitable fashion.

Practically the only ray of light is supplied by Bad Ape (Steve Zahn), whose past experiences allow for sometimes humorous relief. Otherwise, it's a grim affair. After all, everyone is fighting for their lives and the survival of their respective races. and desperation runs rampant through the veins of both the apes and the humans.

Still, War for the Planet of the Apes never feels oppressive. Instead, it's an emotional approach to a weighty subject. It is dexterous, deftly employing stylish visual storytelling to convey its meaningful themes. Its forward momentum is unstoppable, gaining power as it develops into the best Apes movie yet, and one of the best movies of the year.

The film opens in wide theatrical release on Friday, July 14.

Do you feel this content is inappropriate or infringes upon your rights? Click here to report it, or see our DMCA policy.
Andy SerkisMark BombackMatt ReevesPlanet of the ApesWoody Harrelson