Destroy All Monsters: Darkness Before The DAWN OF THE PLANET OF THE APES 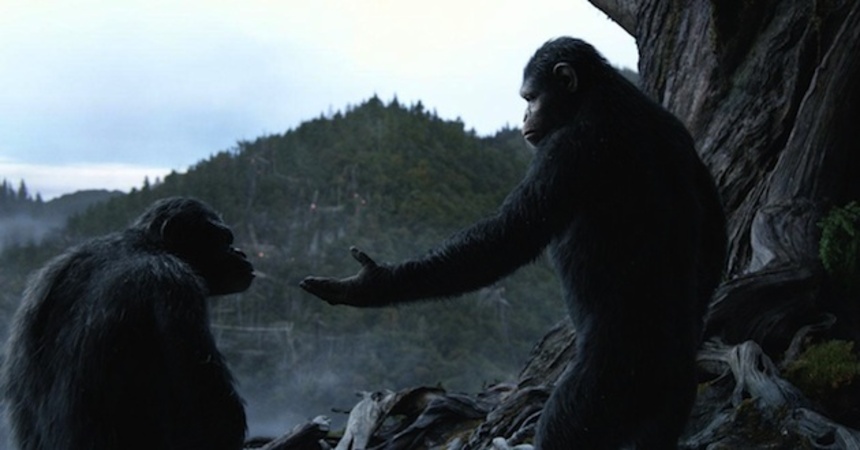 There's the going theory that depressives are more clear-headed in a crisis, because we spend so much time mentally rehearsing the worst-case scenarios. When such scenarios ultimately arise, all the prep work has been done.

If so, this summer's moviegoers might prove themselves uncommonly useful upon the coming of the end times. Our pop culture is dreaming, obsessively, about the end of the world.

Dawn of the Planet of the Apes is another film in a line that sees the annihilation of the human race's supremacy over life on the Earth as a matter of when, not if. When Godzilla was released I quipped that if we could not, collectively, get our shit together to actually solve the planet's environmental catastrophe, Hollywood can at least make monster movies about it and sell tickets. The premise appears to be holding.

DOTPOTA is earning a fortune while glibly presaging our inevitable doom. It needs bear none of the responsibilities of its own image system beyond its entertainment value. It is the current apex of our industrial cleverness at manufacturing spectacles exactly like itself.

I watched Dawn of the Planet of the Apes agog. It was difficult for me to take it all in, out of my sheer bewilderment at its spectacular craft. Every few months, a film arrives that is the new best-in-class example of the technical form of creating false images; right now, and for the next few weeks or months or maybe even the rest of the year, Dawn of the Planet of the Apes is the most technically impressive fantasy picture ever made.

I have been fascinated by the evolution of visual effects since learning about the eight hours required to blow a Rebel snowspeeder apart in The Making of The Empire Strikes Back, and as such, it was hard to take DOTPOTA at face value beyond its, well, face value. I looked at those flawlessly rendered simian visages - each with personalities, subconscious movements, emotional journeys, and all I could think was, "how in the fuck did we get so clever as to render this possible?"

Per Mr. Heston, it is, indeed, a madhouse. While the very first Planet of the Apes movie was built around a more gravity-defying conceptual switch - "what would it be like if human beings were the ones in the animal cages?" - the world crafted in Dawn is by far the more unsettling one.

Planet of the Apes took its up-is-down, black-is-white inversion and used it to tell jokes. Some of them were stupid. Some of them were solid, gentle (and not-so-gentle) social satire. Either way, the humour meant that Planet of the Apes was a fun movie to watch, an alpha primate in the development of blockbuster movies (even though it was released in February). It was weirdly on-point about the dangers of scientific thought falling subservient to religious belief, but otherwise, it was a barrel of monkeys.

I don't think blockbusters are particularly fun anymore. This summer, certainly not. Dawn of the Planet of the Apes augurs a more brittle world, where the power balance of intelligent life on Earth isn't upside-down, but parallel: two distinct societies, human and ape, living uneasily side by side (for the time being).

Through the riot of that visual effects proficiency I mentioned above, parity exists between the two cultures in a way that hasn't been possible before. One is a group of actors like any other, and one is a miraculous trick of actors and computers, but they come to equal weight on their onscreen verisimilitude, and as such, our emotional investment in them.

To underline the point, director Matt Reeves frames a sequence of Gary Oldman shuffling through family photographs on his iPad, the glow from the screen quietly lighting the actor's tearful, joyful face; and then repeats the trick a few scenes later, with an entirely CGI character delivering just as complex a scene in total wordlessness, with a different glowing screen and different family pictures.

As man akins to ape and ape akins to man in the photorealistic solidity of Dawn of the Planet of the Apes' rigorously imagined world, something sort of horrible happens, and it makes DOTPOTA perhaps the most pessimistic American blockbuster of the year - as violently so as the original film, back in 1968.

What happens is this: the moral fantasy of the evolved animal dies. If Dawn's first act (and the entirety of its predecessor, Rise of the Planet of the Apes) is based on some kind of hippie notion that animals are innocent creatures horribly mistreated by the vulgar whims of man, a single gunshot in the middle of the Dawn - when Koba "kills" Caesar - puts that notion to rest.

Not because Koba's viewpoint on the man/ape schism is pushed into the foreground through his act of violence; but because Koba has a viewpoint, and Caesar has a viewpoint, and each of the other major characters - ape and human - each have a viewpoint too. It's the simple fact of all these intelligent creatures jostling up against one another that creates Dawn of the Planet of the Apes' domino fall of escalating tensions and, eventually violence. Upon returning to life, Caesar must acknowledge that the schism is now unsolvable by any means but war.

With this, the vestigial tail of the earlier film drops off. Animals are not merely wise, benign creatures who'd be better off without the misguided human race. Or, more usefully, the film regretfully admits that with intelligence there seems to come a basic, intractable problem: viewpoints and values will differ, and as long as there are sentient beings with the ability to act upon their will, conflict will come.

This is abject pessimism in the guise of summertime fantasy. Not because DOTPOTA is about a post-human world where our control-seeking hubris only accelerated nature's ability to destroy us (although it's that as well); no, because the film argues, and argues well, that the natural burden of self-awareness is the inevitability of violence and destruction. For thinking creatures, eventually, there is no other way but conflict.

The original film saw Charlton Heston cursing a dead human race from beyond the grave, pounding his fist on the sand for their shortsighted arrogance. Dawn of the Planet of the Apes is far more unsettling. It sees the mushroom cloud in mid-flower. It rewrites the old line: "You maniacs, you are blowing it up - and you could not stop yourselves even if you tried!"