RISE OF THE PLANET OF THE APES Blu-Ray Review 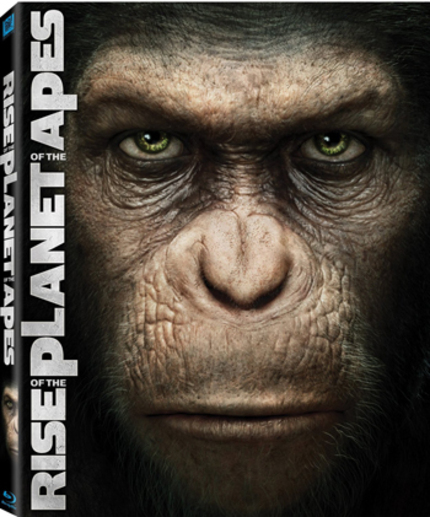 So, Rise of the Planet of the Apes should have been one of those movies that we return to at the end of the year for a "worst of" list or the one where, even a few months later, we're still scratching out heads at the baffling decision to (yet again) reboot the classic (albeit increasingly corny) original franchise. It certainly wasn't supposed to be a very good extended prison break film, it most definitely wasn't supposed to have one of thrillingly-staged finales of the summer, and dammit, Andy Serkis wasn't supposed to break our hearts with his mocap performance as Caesar, the first of the evolved primates who gets the ape revolution (and the restarted franchise) a much-needed heart and soul.

Seriously, I dare you not to get a little choked up during the scene where James Franco's character takes Caesar to the shelter. I dare you, you monster.

Obviously, I was quite taken with Rupert Wyatt's take on the material. While it's by no means perfect, I keep returning to the idea that around the halfway mark, Rise of the Planet of the Apes turns into a thrilling, well-tuned escape movie. Not necessarily because the action in the last act is particularly smart or inventive (it's not going to top The Great Escape or even Mesrine in the "clever getaway department"), but by that point, Serkis already has us wrapped around his character's rapidly more dextrous digit as he starts to figure out that maybe he and his primate brethren can do better than a cage and some gruel.

If I keep harping on Serkis, it's because his performance isn't just a matter of capturing an ape's movement, but communicating evolving human intelligence--and later, an evolving worldview after he's separated from Franco's conflicted scientist character. Serkis and the film's mocap engineers know that we empathize with feeling communicated through the eyes, and thanks to a handy mutation via gene therapy, Caesar's are a brilliant green that we can easily track when he's mingling with other apes. But more importantly, they start off soft, innocent, and curious about the world before gaining a sort of cold cunning and calculation.

Okay, yes, Franco is incredibly stiff through much of the movie, and while he has a couple of moments, he seems a little lost in how to approach the material. Likewise, some of the other human characters come off as so completely dickish that the deck feels a little stacked in favor of Caesar going rogue, in particular, David Hewlett's rightly angry but still prickly and irritating neighbor and Tom Felton's abusive rescue facility caretaker. The former feels like we missed some of the escalation on the cutting room floor while the latter is just such a piece of grinning, nasty cruelty, that the first time we see him, it's obvious we'd never leave our car keys, much less our pet with him.

Still, to keep enumerating the ways the movie is flawed would neglect the fact that taken as a whole, Rise works because it's so completely and utterly human. In Caesar, we get a hero with whom we can not only empathize, but actively root for. I don't know how many times I can say it, but Serkis,Karin Konoval, Terry Notary, and the rest of the rest of the film's mocap crew elevate the material in a way that made me fall in love with Rise of the Planet of the Apes.

Most of the included docs don't really dig all that deeply into the production or the history of the franchise and it feels like the "Mythology of the Apes" featurette was something of a missed opportunity. However, the commentaries are pretty illuminating in terms of some of the choices Fox and the the movie's writers and director made in getting this movie to the screen during its protracted development process. One of the most interesting bits was listening to screenwriters Rick Jaffa and Amanda Silver discussing the evolving characterization of Caesar, with an initial version that a little more on the villainous side than the one we ultimately got. These tracks are definitely worth checking out if you enjoyed the film.

Rise of the Planets of the Apes is available on DVD, Blu-ray and VOD.