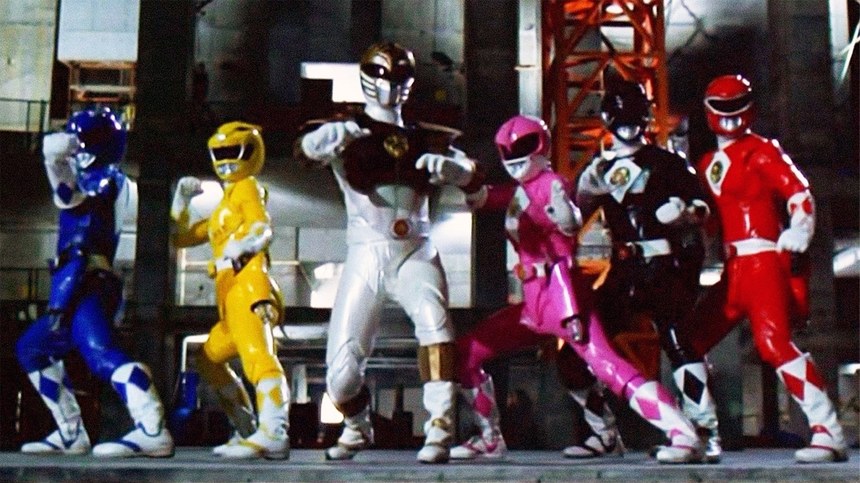 I consider myself a “90s kid” (I was born in 1990), which means I grew up with the Mighty Morphin’ Power Rangers on TV. It was quite the phenomenon —the show was an immediate success both in the United States and my home country of Peru, which led to all sorts of merchandise being sold in stores. The Rangers were everywhere, from action figures to lunch boxes and kid mattresses, which meant a big screen adaptation was pretty much inevitable.

Nevertheless, some people simply couldn’t imagine a big budget version of these characters being released in cinemas. After all, the Power Rangers were a mix between a Japanese TV show called Super Sentai —the fight scenes and the effects-heavy sequences were directly lifted from this source— and new footage shot with American actors replacing the original Japanese thespians. At its very core, Power Rangers was a sort of pastiche, a Frankenstein Monster-like product whose very charms depended on its low budget, laughable dubbing and clear use of stunt doubles. A glossier, more professional-looking product could ruin all of this.

But that wouldn’t stop 20th Century Fox and Saban Entertainment from releasing a movie, and that’s precisely what they did in 1995. I remember being very excited for this film, and although I can’t remember my precise reaction while watching it in a darkened theatre, I do recall liking it a lot in subsequent years —so much so that I still own an old VHS copy of the film, as well as the DVD; unfortunately, there’s no high-def version available, at least not in a physical format).

So in the end, how did Fox and Saban do with Mighty Morphin’ Power Rangers: The Movie? Well, considering the source material and the “talent” they had to work with, not that bad. Yes, more than any other movie from the 90s, it’s a product of its time, full of cheesy one-liners and puns, “cool” and “rad" attitude, pop/rock songs (like Shampoo’s “Trouble”) and terrible, early CGI. But that’s precisely why it works so well, especially when seen more than twenty years later, when nostalgia for more innocent and colorful times is at its all-time high. I was a fan of the Rangers back then, and to an extent, I’m still one now (I even liked the aforementioned “gritty reboot” quite a bit).

Most of the American cast of the show reprised their roles for the movie. Jason David Frank is Tommy, the White Ranger and pony-tailed leader of the group; Steve Cardenas is the Red Ranger, a co-leader of sorts; Karan Ashley is Aisha, the Yellow Ranger With Attitude; every 90s Kid’s Platonic Crush Amy Jo Johnson is the more innocent Pink Ranger; Johnny Yong Bosch is Adam, the awkward Black Ranger, and David Yost is Billy, the Nerdy Blue Ranger (nerdy only because he wears glasses, you see). Together, led by holographic face in a tube Zordon (Nicholas Bell), and his (annoying) robot friend, Alpha 5 (Peta-Maree Rixon) they must stop the evil and disgusting Apocaly… Ivan Ooze (a delightfully over-the-top Paul Freeman, of Raiders of the Lost Ark fame) from conquering the city of Angel Grove, and then the universe.

No, the plot is nothing to write home about. Predictably, it’s pretty much an excuse to insert as many new monsters, Zords (giant robots) and superhuman characters in the picture as possible, with the hopes of selling new toys. Like the TV show, the film harkens back to the robots-vs-monsters series and movies from the 60s and 70s, although I must admit the dated CGI does hamper some of the charm. I know the producers had all these new resources to play with (especially after the success of Spielberg’s Jurassic Park which, incidentally, is directly referred to by one of the characters), but in this case, I believe miniatures and guys in suits would’ve done a much better job. No one goes to a Power Rangers picture expecting realism, so director Bryan Spicer and his team shouldn’t have tried to achieve it.

Nonetheless, the script does compensate this a bit by adding a crap ton of cheese to the proceedings. Consider the Rangers’ first fight against Ooze’s minions, in which they keep uttering the most ridiculous and groanable one-liners imaginable ("let me get the door” says Adam, before slamming a door into a bad guy’s face), and jumping around, doing back-flips (a technique which seems to be their main mode of transportation, by the way) and ridiculous poses. Oh, and did I mention that every time a monster gets hit, the director had the great idea of inserting a cartoony sound effect? It’s all dumb fun, and no one should even consider taking it seriously.

The Rangers' personalities don’t go beyond “the nerdy one”, the “the one with a pony tail” or “the damsel in distress” (the fact that Kimberly keeps needing to get rescued is both absurd and infuriatingly sexist), but as far as the actors are concerned, they don’t do that bad of a job. At least they seem to know what kind of picture they’re starring in, and try to inject as much energy as possible to their teenaged characters. The bullying comic relief duo of Paul Schrier’s Bulk and Jason Narvy’s Skull are predictably over-the-top and annoying; at least they don’t have as much screen time as they had on the TV show.

But it’s Paul Freeman (Hot Fuzz) who manages to steal the show. The talented and experienced British actor goes so far over-the-top, he threatens to eat the whole scenery; he laughs, he dresses like an evil clown, he spits radioactive snot, and he even laments the fact that he missed the Brady Bunch Reunion while he was trapped in an intergalactic, egg-shaped prison. The fact that he turns into a CG abomination during the effects-heavy climax —and gets defeated due to a kick in the groin, no less— is quite the waste.

If you’re a fan of the show, or are at least a little bit familiar with it, you should know what to expect from Mighty Morphin’ Power Rangers: The Movie, and thus shouldn’t be disappointed by it. The sets look cheesy and the locations as otherworldly as my back yard —the mysterious planet to which the Rangers travel looks suspiciously similar to the Australian coast—; costumes look marginally better than those in the TV show (at least they’re not wearing spandex) and the digital effects, mediocre for 1995 standards, look like something out of a PlayStation 2 cutscene nowadays. It’s simplistic, dated and corny entertainment, but at least it knows what it is, and thus never feels like an overly-cynical product (although that’s precisely what it is, too).

The 2017 reboot might star well-developed characters, have better acting and more impressive digital effects, but the original 1995 movie is full of 90s charm and “radness”, which makes it a slightly superior product, despite being a worse movie overall. If you’re a 90s kid like me, I'm pretty sure it’s already a guilty pleasure of yours.