It tells a truly fascinating bit of cinema history involving the Gold Rush at the turn of the 20th century in Dawson City, deep in the Yukon Territory. The two-hour film is filled to the brim with rich historical details which can be almost too much for a single viewing. Dawson City, with its clever, carefully constructed paralleling narratives of the prospecting and cinema, accompanied by wealth of archival and found footage, achieves something far greater than a historical documentary or an experimental art-house film ever can.

Dawson City starts with a prologue Morrison's appearance in some sport jock TV spot being asked about 1919 World Series footage. This is the year of the infamous "Black Sox" scandal where 8 of Chicago White Sox players took money from the East Coast gambling establishments to throw the game.

We move back to 1979, while digging for foundation behind Diamond Tooth Gerthie's Gambling Hole in Dawson City, townsfolk discovered hundreds of film reels buried under the permafrost. Local conservators and museum curators got a hold of these treasures which turn out to be rare silent films, 372 of them, thought to be lost forever.

Then it moves on to 'Film was born an explosive' segment, explaining the early silent films were shot on cotton based nitrate film stock which was highly combustible until the industry switched over in 1949 to a safer, acetate based stock.

And the credit starts to roll.

So how does these figure into the film? Beautifully. They all fit into the narrative of digging for gold leading to uncovering cinema gold.

California gold rush fever pushed prospectors further up the uncharted northern territories. After some found gold up in Yukon in 1895, many prospectors made a perilous journey to the land where the Klondike River meets the Yukon River. A lot of them perished or turned back along the way. The place was called Tr'ocheck and belongs to native Hän speaking people. Things changed quickly and the natives were forced down the river into a settlement. The newly arrived (re)named it Dawson City.

It grew and grew and by 1916, the peak of gold mining, the population of the city reached 30,000. The city built a large recreation center, called D.A.A.A., equipped with a swimming pool and doubled as a hockey link in winter, a library and a movie theater, hosting traveling moving picture show tropes.

As it was common in those early days where everything was built on woods, Dawson City burned down to the ground every year for first 9 years and had to be rebuilt. And nitrate films no doubt contributed to numerous fires. 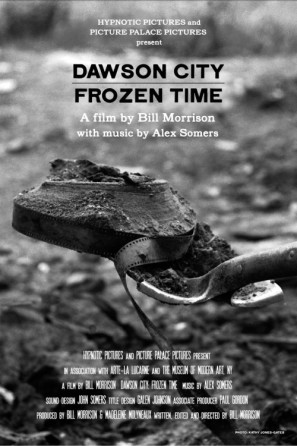 As the gold mining lost its luster and the city grew smaller, so did the need for the reel entertainment. And because Dawson City was the last stop on the Hollywood film distribution route, for economical reasons, movie studios didn't want the film back by carrier. The duty of keeping them fell on a bank clerk who in turn kept them in the basement of a library first. But after they ignited and caused the fire, one of the bank managers decided to bury them in the now abandoned and drained D.A.A.A. swimming pool few blocks away.

Many more film reels were discarded indiscriminately, into the Yukon River and burned in a bonfire, according to the bank clerk's journal. But 372 survived, frozen under the permafrost all those years, preserving the nitrate negatives while all other known copies disintegrated over time.

Combining beautiful still pictures of prospectors from glass negatives by Eric Hegg which were also recovered in the 70s and those found silent films heavily damaged by elements over the years and archival footage and hypnotic music by Alex Somers, a musician known for producing Sigur Rós albums, Morrison concocts an engaging, entertaining art film that doubles as an intriguing slice of history of Americana.

For instance, we get to know that American old money came from the Gold Rush related businesses: Frederick Trump (Donald Trump's grandfather) made his family fortune by setting up brothels along the prospecting trails and the Guggenheim family bought the mining lands and created Yukon Consolidated Gold Company.

Many of the 'Dawson City Find' films and newsreels are featured throughout, often matching the historical events of the time - 1919 World Series, the rise of American Socialist Movement, Industrial Workers of the World, WW1, and so on.

Morrison also has fun with thematically and physically matching scenes from these damaged but remarkably preserved beautiful looking films. Some of the notable titles are: The Stolen Paradise, The Half Breed, The Social Buccaneers, The Salamander, The Unpardonable Sin and The Recoil.

Looking through all these buried treasures for the first time, Morrison must've been a happy camper. He does a fine job assembling these, weaving them into a hugely entertaining, concise historical narrative. Dawson City: Frozen Time is one of the best films of the year.

Dawson City: Frozen Time opens in New York on Friday, June 9 at the IFC Center (June 16 in LA) with a national rollout to follow.