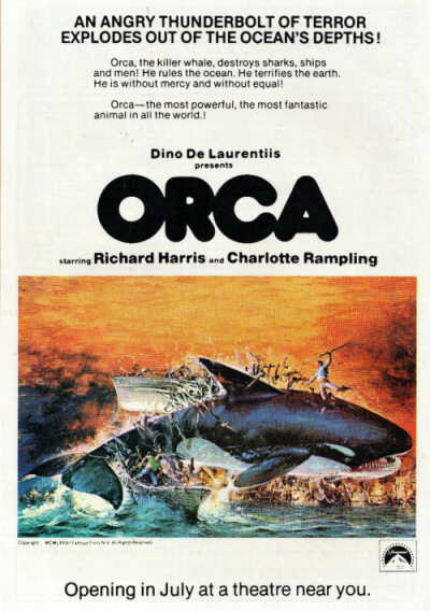 In the aftermath of Jaws, many cinematic imitators swam into shore, but few could compare to Orca.

According to Wikipedia. Orca was born from the mind of producer Dino de Laurentiis. Supposedly, late one night in 1975 -- perhaps unable to sleep because of his own, ill-fated production of King Kong that would be unleashed the following year -- he called fellow producer Luciano Vincenzoni and told him to "find a fish tougher and more terrible than the great white" shark portrayed in Jaws. Luciano's brother Adriano had an interest in zoology and reportedly pointed toward the killer whale. Luciana Vincenzoni and Sergio Donati were credited for the original story and screenplay.

That's one version, anyway. Arthur Herzog published a novel titled Orca in September 1976, that supposedly inspired the film, though it's not credited at all. Was it a novelization? A few years later, Herzog told his new wife that he'd had the idea before Jaws and that Orca was based on his novel. After spending a couple hours researching this point, I gave up. Someone knows positively, I'm sure, which story is accurate.

Reportedly, famed 'ghost writer' Robert Towne did ... something ... with the script as well in an uncredited capacity. A 1988 article in Washington Post referred to this as a known fact while suggesting that Towne himself didn't want to talk about it.

My own memory of Orca is confined to the trailer; for reasons I can't recall, I was never sufficiently motivated to see it in a theater when it was originally released in July 1977. Was it the bad reviews? The review in my hometown Los Angeles Times is not available, but The New York Times was scathing: "If it were medically possible to overdose on claptrap, Orca, which opened yesterday at the Criterion and other theaters, would be compelled to carry a warning from the Surgeon General."

The uncredited reviewer for the trade publication Variety had a similar opinion:"Orca is man-vs-beast nonsense. Some fine special effects and underwater camera work are plowed under in dumb storytelling." When the film was eventually released on DVD about 15 years ago, reviews were mostly dismissive.

Prompted by the imminent release of 47 Meters Down, another killer shark movie, I sought out something for comparison's sake, and Orca was the only title available to me for rental (online legally at Amazon and Vudu and others). Having recently rewatched Logan's Run cinched it for me; Orca was the followup film by director Michael Anderson. 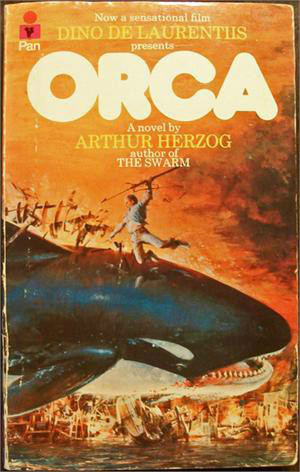 Like Logan's Run before it, Orca is a film that was ahead of its time as far as visual effects are concerned. Much more appalling, though, is the premise that a killer whale, a misnomer of a name if ever there was one, would stalk a human so as to take revenge. In the wild, killer whales simply do not intentionally attack humans. (In captivity, of course, that's a different story; see the documentary Blackfish.)

Compromising the film further, the presence of whale experts Rachel Bedford (Charlotte Rampling) and Umilak (Will Sampson) bring diversity to the cast, but both are limited to delivering arguments that are contradictory and confusing.

What saves the film, at least in my mind, is Richard Harris. He's Captain Nolan, a salty Irish sea wolf who moved to Canada in his youth but now longs to return home. First, though, he must pay off the mortgage on his boat, and so he's been searching for a great white shark to capture and sell to a marine park.

He finds one, but before he can capture the beast, it's killed by a killer whale, prompting Nolan to switch his focus. Things do not go as planned, Nolan accidentally captures Mr. Orca's wife, Mrs. Orca, who doesn't want to be captured, and then to the surprise of everyone ...

Well, it's a spoiler, but it's pretty gnarly and unpleasant to see, and it results in Mr. Orca fixing one good eye on Captain Nolan and vowing revenge until they can go mano a man -- er, make that mano a shark -- and settle things in the water, once and for all.

The film runs a fleet 92 minutes, which is theoretically perfect for the story that unfolds, and director Michael Anderson definitely works hard to orchestrate a solid thriller with an unusual setting. It's easy enough to overlook the limitations of fake killer whales and footage filmed in captivity that strains to fit into the fictional narrative, and the often overheated and irresolute characterizations continually get swamped with one more set piece that moves the narrative along neatly.

Richard Harris was still on a good, busy run as a leading man; Orca fits neatly somewhere between The Return of a Man Called Horse and The Wild Geese as far as his performance is concerned. He's fooling himself, and no one else quite believes him, yet he's also haunted by his own demons. He knows what he's done and eventually is forced to realize that he must face up to his own sins.

Harris, aged 46 during production, performed his own stunts. He continued giving fiery performances until his death in 2002, becoming beloved by millions for playing Professor Albus Dumbledore in the first two Harry Potter installments.

Rampling remains a wonder. She followed this up with Stardust Memories and The Verdict. Will Sampson continued dispensing Native American wisdom to stupid white people until he died too young in 1987. Bo Derek made her first film appearance as Bo Derek -- she made one prior film as Kathleen Collins, Fantasies, which wasn't released until 1981 -- before shooting to stardom in 10 two years later.

Ultimately beached by its own ambitions, Orca plays best as the tale of one man who must confront his own mortality in the form of a killer whale.

70s Rewind is a feature that allows the writer to relive his past through his favorite film decade.

Do you feel this content is inappropriate or infringes upon your rights? Click here to report it, or see our DMCA policy.
Arthur HerzogCharlotte RamplingDino DeLaurentiisJawsMichael AndersonOrcaRichard HarrisWill Sampson

Loved it on TV as a young'un a scary real monster movie with the magnetic Richard Harris.
The good thing about TV in those days is that someone like the national treasure David Attenborough would come along with a beautifully shot documentary and teach you about these majestic killer mammals, mammal killers.

Also recall another de Laurentiis animal production from the same year - and drive-in fare - White Buffalo. Both have great one sheets that are probably better than the actual films.

Ha!! I remember that film did it not have Charles Bronson and big Will Sampson in it.
Thinking back on it did they not have a scene in which to survive in the cold they did the old kill the buffalo gut it and climb inside it like a sleeping bag, First Nation trick.
Which of course was used in the Empire Strikes Back.

And Leo's 'The Revenant'! I remember the poster too.

Love that poster!
I remember ORCA fondly for three things: the cinematography, Richard Harris, and the incredible score by Ennio Morricone.

yes you hit the nail on the head. Bronson as Wild Bill and Sampson as Crazy Horse.

Just checked the one sheet its Epic!!!
I had forgotten it had massive eyes. : )

It's a beauty.
It reminds me of the great Geof Darrow.

yeah, they sure don't make posters like that any longer. Think John Berkey did Orca. Boris Vallejo White Buffalo.

Back in the time machine we go.
It was almost exclusively Boris Vallejo and Frank Frazetta who were responsible for the covers of all the Conan novels I read.

I think all the paperbacks I have of the R.E.H. Conan run are the Frazetta covers. Absolutely amazing artist. Vallejo's stuff doesn't click with me as much. A little too much sheen and gloss. Maybe why I like his White Buffalo poster, it isn't as glossy as his sci-fi and fantasy art.

Your right the Interweb tells me I'm wrong. ; )
I most likely had all the Sphere editions of Conan which bore the same covers as the American Lancer editions.
The Artists of those being Frank Frazetta and a chap called John Duillo
Boris did some of the covers of the black and white Conan Comic we got here in the Sceptered Isle.

Yes! Forgot to mention Morricone's score, which is very good. And the cinematography looks lovely as well.

You mean this one ?

That pocket book... awww, hippie flashback time... remember going into a book shop and almost all pocket books in the science fiction, fantasy and horror sections looked like that?

That's the one.
Perfect tagline "You Won't Believe Your Eyes!"

I always get this one confused with DAY OF THE DOLPHIN, even though they are nothing alike in terms of story.

Things that swim in the ocean -- they're all the same, Kurt. :D

Ooh, I haven't seen that one. Thanks for the recommendation!

I adore this movie, and feel it deserves a much greater recognition for being the thought-provoking monster movie that it is rather than a Jaws wannabe.

As another writer once put it perfectly:
"It’s actually a much more subtle movie than Jaws. Because the horror here isn’t that there’s a monster. The horror is that the orca is like a human. There’s never any doubt about the intensity of its grief or its desire for vengeance. In other words, the horror is in Nolan’s slow realization that he has committed murder."

And as I was wrote in my own attempt to defend the film:
"ORCA is Nolan vs. the whale, but instead of in a ship, this is a captain on land, retired, no longer what he once was, emotionally squaring off with a whale that won't leave the shore line for want of revenge. In a bizarre sort of inverse of the classic Ahab scenario, the WHALE wants vengeance, and the captain wants...resolution. But does this come from a victorious battle? Or absolution? Between sporadic bouts of serious bloodshed, this movie is pure brooding intellectualism."

Nicely expressed! What unfolds between the action sequences may be the film's greatest strengths.