Filmmaker Laura Poitras seems deeply conflicted yet committed to tell the truth in her new documentary. 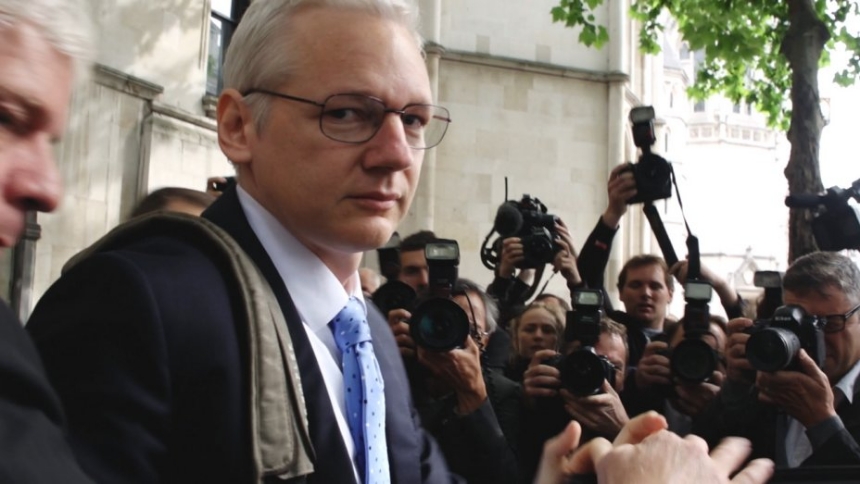 Last week, US Attorney General Jeff Sessions announced that Julian Assange's arrest is a priority of the Trump Administration. So Laura Poitras decided to go back to the editing table to add that information in before Risk, her new documentary about Assange and WikiLeaks, gets released in theaters on May 5. (it will debut on the Showtime premium channel this summer.)

Mind you, it debuted as a work in progress last May at the Cannes Film Festival. But a lot has happened since then; bigly, the US election and the Russian hack scandal. Six years in the making, Risk tries to keep up with a whirlwind of information, highlighting Poitras's unprecedented access to Wikileaks and Assange as many events around the world were unfolding.

Risk is an intense film. It starts in 2011, with Sarah Harrison, a close friend of Assange and one of the editors of WikiLeaks, trying to reach Hillary Clinton on the phone. It's a courtesy call to let her, then Secretary of State, and the US State Department know that they are about to leak some damning information. Jacob Applebaum, another editor at WikiLeaks, is seen at a telecom conference in Egypt after the Arab Spring and Abdel Fatah el-Sisi's military takeover, accusing Egyptian telecom moguls of piggybacking on the revolution, while in fact, they colluded with the Mubarak regime and restricted people's access to the internet and Twitter during it.

As the sexual assault case against Assange takes the center stage, Poitras laments that the project is not what she thought she was making, that she thought she could avoid contradiction in him, but that she was wrong. In her sporadic production log voice-overs, she asks herself, why is Assange still allowing me to film this? His ego? Is this film going to be a collateral for his game later on?

Risk does not make a devil or martyr out of Assange. This will surely disappoint and infuriate both his supporters and detractors alike. There are no new revelations, either. One thing it does is paint a grey picture of the very complicated world we are living in.

It shows that in this information age, the Orwellian dystopia where everything is black and white, and the government has total control over media, can't possibly happen. Even Kim Jung-un's North Korean regime is losing grip on its people because of widely circulating contraband South Korean TV dramas, according to a recent high official defector. But instead, we are left in the moral and ethical muck caused partly by hackers, WikiLeaks and individuals like Assange.

Risk never really answers why Assange chose to harm Clinton over Trump during the election. For someone who is in the know, his opinion seems to be pretty conventional: in his words, she is a war hawk and he is unpredictable, which was everyone else's opinion at the time. But for the sake of the argument, let's suppose WikiLeaks dumping hackers' DNC email did tip the scale in the 2016 election in favor of Trump. With the world on the brink of a nuclear war showdown, was Assange wrong about his choice in risk taking? Only time will tell.

The fact is that unlike Edward Snowden, a cleancut whistle blower and a true patriot (who also was the subject of Poitras's award-winning Citizenfour) or Chelsea Manning, a conscientious objector, Assange is rather a calculating, vain character who is in a position of great power and excercises it by his own principles, weighing the risk factors like a chess game, disregarding how his actions might affect the lives of others along the way.

I question Poitras's judgment as a filmmaker: Why did she include a clip of Applebaum jokingly comparing WikiLeaks' method to unprotected sex to roomful of women journalists out of six years of footage? With the accusations against Assange, it's a little on the nose for me.

It doesn't help when Poitras admits having a relationship with Applebaum, who turned out to be an abusive man, accused by many WikiLeaks women employees and forced out of the organization in 2013. With that, she is taking a risk here of the film being too personal to be objective, too limited by her own involvement to see the bigger picture.

Assange was upset that Poitras got the exclusive with Snowden but didn't come to him to release the tapes. So he severed the contact with her. Three years later, he contacts her again to resume filming. In an epilogue, she says Assange wasn't happy with the latest version of the film.

As we speak, WikiLeaks started to dump CIA secret documents in what seems to be the retaliation to the Sessions speech and renewed interests in extraditing Assange (or vice versa). Luckily the film ends with the info that Wikileaks already uploaded tons and tons of secret documents somewhere as a 'kill-switch option.' So just in case anything happens to the organization, they will be released to the public. Expect a lot more leaks and revelations in the years to come.

If anything, Risk shows that Assange is a man of strong principles and greatly enjoys risk-taking when stakes are high. Exposing the exposer can be a risky business. It's the one that will make people love you or hate you in this politically polarized world. Poitras seems deeply conflicted yet committed to tell the truth. And this is why Risk needs to be seen widely.

Risk will open in New York on Friday, May 5 at the IFC Center and the Alamo Drafthouse Brooklyn, and at other theaters nationwide. Showtime will air it in the summer.