Review: HOUNDS OF LOVE Never Shies Away From Shock 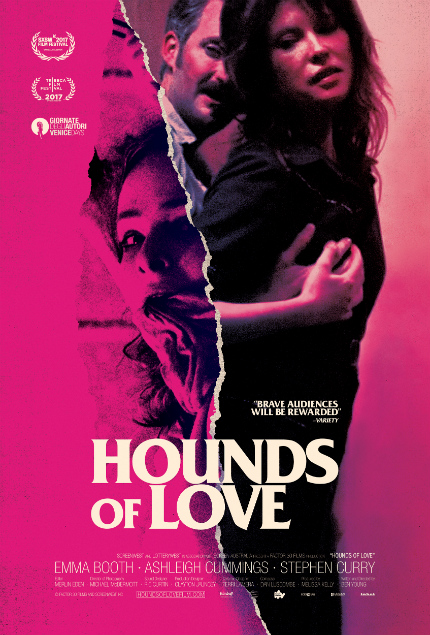 Serial killer thrillers that deal with the dark subject matter of abuse and sexual victimization are the cinematic equivalent of playing with fire. Especially if your film is based loosely on real life crimes, as is the case with Hounds of Love, the risk of plummeting into tasteless depths looms large. The greatest feat of Ben Young’s tremendously accomplished directorial debut is that it tackles an easily sensationalized narrative with uncanny poise and a sharp understanding of the power of empathetic identification.

Like David Fincher’s breakout success Seven (and likely to become every bit as much of a calling card) while channeling the intensity and family dysfunction of fellow Australian Sean Byrne’s debut, Hounds of Love never shies away from shock. As a counterpoint to those thrillers, however, Young mostly pares down the graphic details and uses all manner of insidious insinuation to masterfully ramp up the tension. A strong prologue sets the stylistic and emotional template for what is to follow.

Hounds of Love opens with a slow motion tracking shot of underage students playing softball, or better: a menacing crawl that coldly takes stock of their body parts and stands as the objectifying gaze of predators on the prowl. Moments later, we witness how a young girl is cozied into being abducted, enter the nondescript house that will serve as the setting for most of the terror, and glance a few shots of a heavily bolted door and shuttered window behind of which all manner of degradation is perpetrated by the twisted pair who call it home.

Treated with chilling triviality this has become routine behavior for suburbanite couple Evelyn (Emma Booth) and John (Stephen Curry). Crucially, instead of chronicling the violence, the audience sees little more than an aftermath: bloodied handkerchiefs, an instrument of violation and a body being disposed of in the woods. Young exhibits a knack for striking a major nerve without ever having to stoop to gratuitousness. His film is most unmerciful when it cuts to black, drawing on the viewer’s imagination or a disturbing sound design punctuated with blood-curdling screams and whimpers to put a gruesome two and two together.

We understand, as soon as protagonist Vicki (Ashleigh Cummings) is introduced, that a similar fate lies in store for her. But rather than offering an umpteenth exercise in sadism Young is much more interested in a psychological exploration of the toxic relationship between the perpetrators and how Vicki can use their dysfunction to her advantage; in short, how she can try to spin her own tale of survival against the odds and find uncommon resilience in a hopeless place.

While Curry misses not a single beat as an incarnation of pure evil and Booth mesmerizes as a badly damaged mother who can be monstrous and tragic in equal measure it is without doubt Cummings’ portrayal of the resourceful and tenacious young heroine that glues the audience to the screen, ensuring we remain deeply invested every step of the way. Young understands this perfectly and continues to push our buttons, using among other tricks clever intercutting to mislead the audience. Up to and including the rousing climax he dangles a few will-they-won’t-they scenarios in front of our eyes that keep us on edge and keep us guessing as to the actual outcome.

Having world premiered to favorable reviews in Venice (2016) Hounds of Love is a startling debut that seems destined for a healthy festival run in months to come. From editing and pacing to cinematography and scintillating score, Young offers a rarity: a complete package that comes close to a perfect film. Whether thought of as a psychological drama, a survival thriller or simply a brusque reminder of the calculated cruelty humans are able to inflict on one another in the most casual of manners (especially in the absence of genuine affection), Hounds of Love puts audiences through the emotional wringer and stays with you for days to come.

Review originally published during the SXSW film festival in March 2017. The film opens in select U.S. theaters and on VOD on Friday, May 12; visit the official site for specific locations.

Do you feel this content is inappropriate or infringes upon your rights? Click here to report it, or see our DMCA policy.
Ashleigh CummingsBen YoungEmma BoothStephen CurrySusie Porter